After spending three busy days at Disneyland in early May, my family and I  discovered that unwinding at Sea World was just what we needed before flying home to Colorado. It was overcast the day that we went, so we were sad to miss the sun. However, the lines were pretty much nonexistent–a nice change of pace from the Happiest Place on Earth. 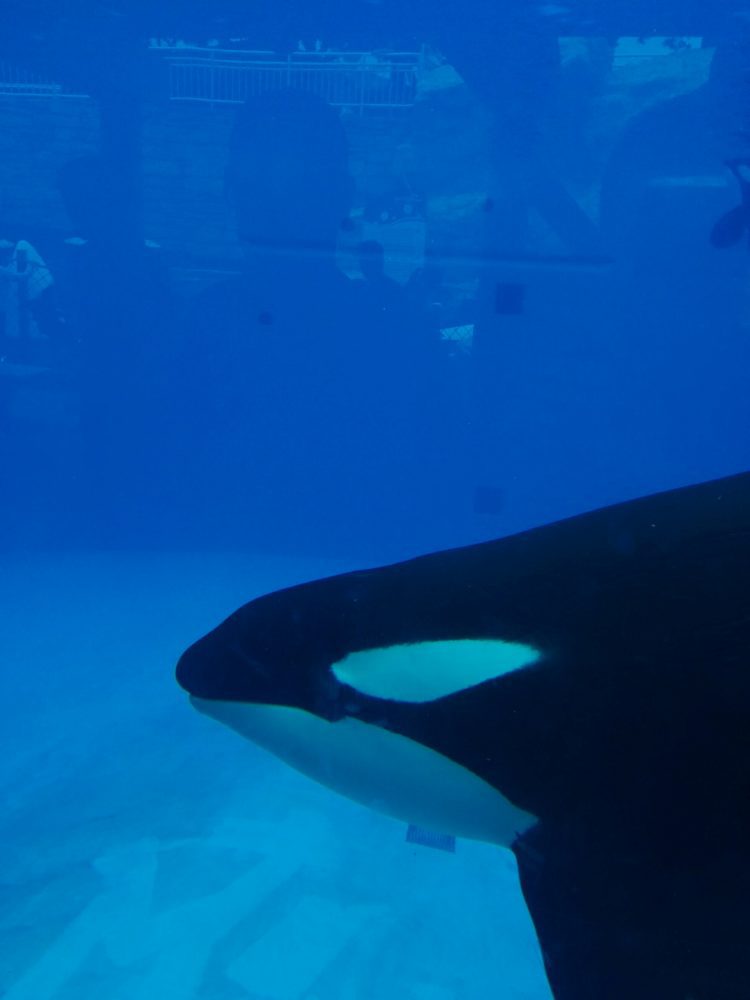 Get the best prices on hotels and SeaWorld tickets and other destinations in California from GetAwayToday – including a bonus of $10 off using the code Clarkscondensed at checkout. Tickets also available for San Diego Zoo, Disneyland, LegoLand, the CityPass, and MORE!
Sea World has an app you can download which allows you to purchase tickets at a discount, as well as view the descriptions of  events, attractions, and rides. Just be sure to download the app before you get to the park, otherwise you risk the chance of getting stressed out and distracted, and might just end up accidentally sending your newly purchased tickets home instead of to your phone–not like that happened to me or anything. But if that somehow happens,they have a really good customer service desk that will print off the tickets quite easily. I’m sure that if I had any other questions, they would have been very kind and helpful.

When you get inside, it can be a little overwhelming to decide where to go, because there are so many fun things to check out. I would recommend taking a few minutes to look at a map and decide on what you want to see and in what order–especially if you’re in a time crunch like we were.

One of the first places we went was the Dolphin Show.  The master of ceremonies was fun and informative and kept us entertained while we waited for the show to begin. She made it very clear to the crowd that the dolphins (as well as the rest of the Sea World animals) have all been rescued and wouldn’t have survived had they been left in their natural habitats. It was very heartwarming to see the performers with the dolphins, because it was obvious there was a special bond between them. 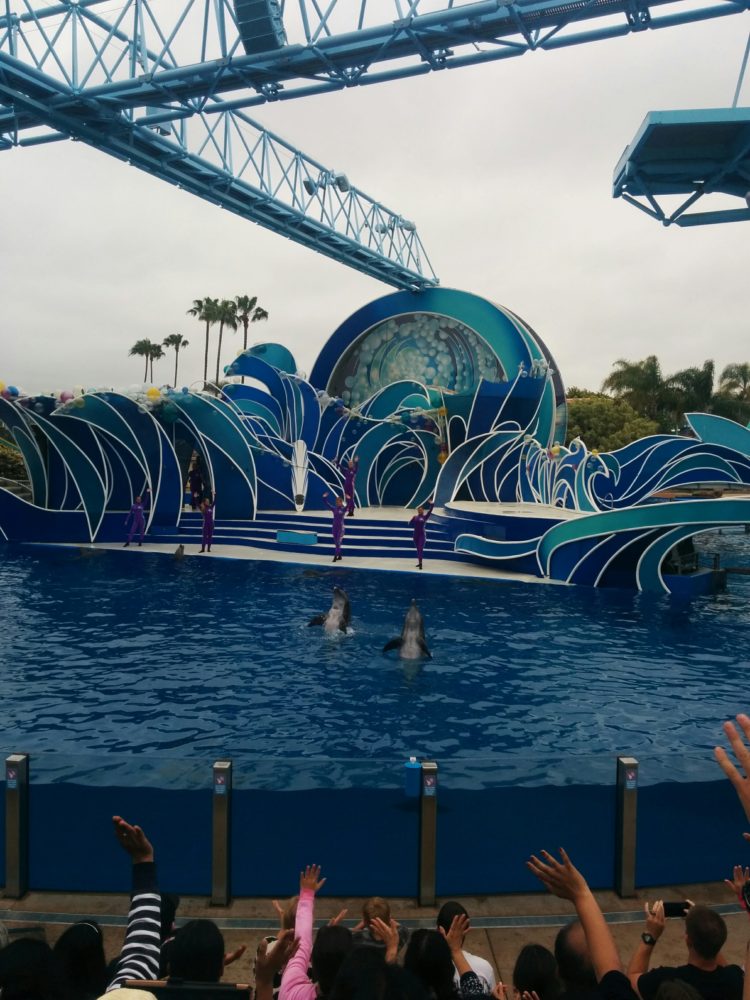 We were lucky enough to arrive at the stadium about 30 minutes early, which meant we had the choice of any seat we wanted. The first ten rows are designated as the Splash Zone, and the spectators in the first few rows were soaking  wet by the end of the show. Forrest thought sitting in the seventh row would be fun so we were bracing ourselves to be drenched–but it was a little disappointing when not a single drop hit us.

The show was well worth sitting on hard, metal stadium seats. Being able to see these animals do spectacular stunts and tricks had a timeless feeling to it. There were people of all ages in that stadium, and they all seemed to be enjoying the show. 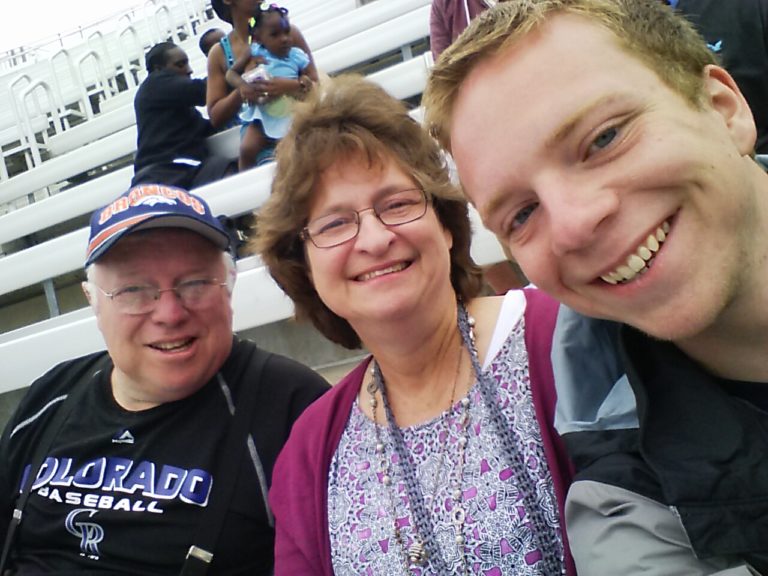 We unfortunately were not able to see everything in the park, but what we did see we really loved. There were many small aquariums throughout, and we chose to go to the Turtle Reef, and Shark Encounter. It was quite thrilling to see these animals up close (behind the safety glass of course).

I surprisingly really liked the flamingo exhibit. I know that you can see these at the zoo, but we were able to get up super close to them and have them eat “flamingo food” from our palms. 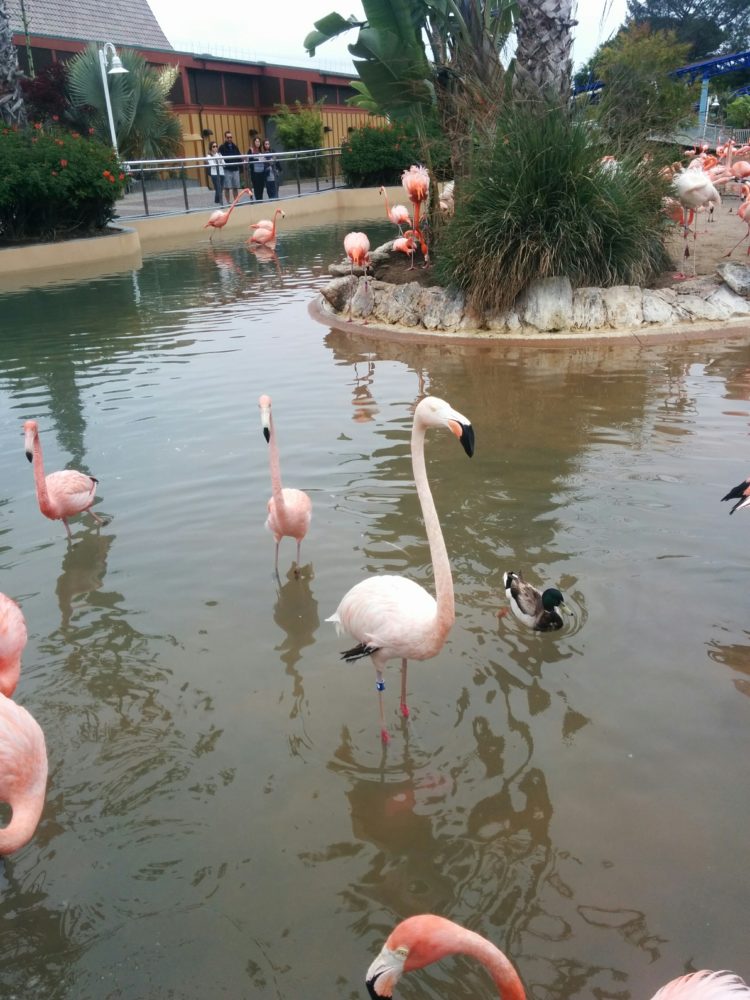 There are several rides at Sea World, but the only one we had time for was the  BaySide Skyride, which is basically a gondala ride over the bay. If you’re afraid of heights, this ride isn’t for you–we were pretty high up there. There were some nice views though. 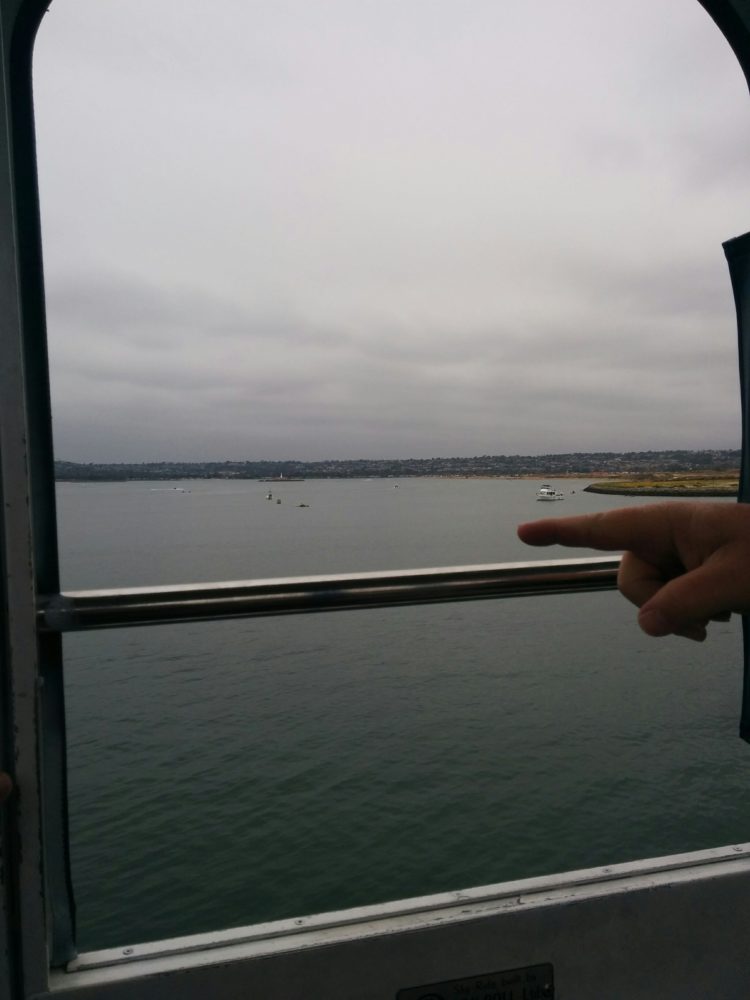 We unfortunately did not give ourselves enough time to see the Shamu show, which we were bummed out about. However, we were happy to see that there is a place to view the killer whales while they are on break–Shamu’s Underwater Viewing. It was breathtaking to see these magnificent creatures so close. There were signs that gave some interesting information about the animals, and how they are rescued. It was a nice alternative to the show. 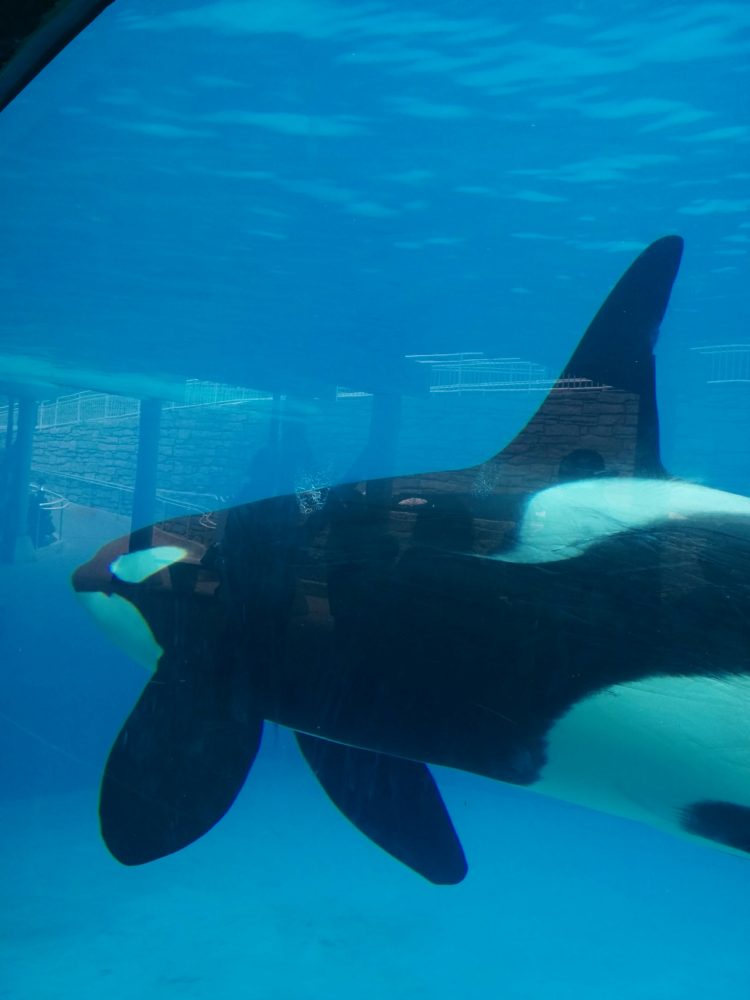 Sea World also has exhibits and shows designed for the adventurous among you. Note the picture of Grandpa Bruce  below with the cleaner fish in one of the interactive exhibits. A few members of our group were a bit wary of it, but kids of all ages really seem to love this exhibit. I would recommend bringing some hand sanitizer if you plan to visit, because your hands can get a little slimy!

Some other interactive exhibits that we saw gave you the chance of touching the sting rays and small (harmless) sharks–you know, the kind that you dissect in your high school biology class. 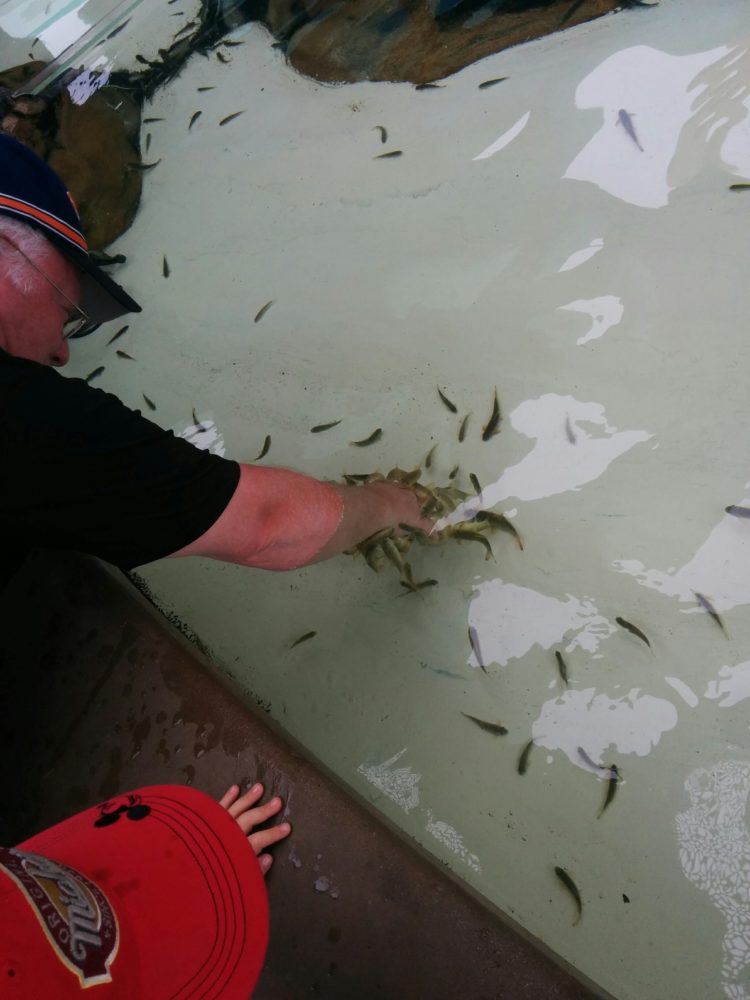 Gift shops and food stands are placed conveniently throughout the park–because after all who doesn’t want to buy a souvenir, churro, or turkey leg? 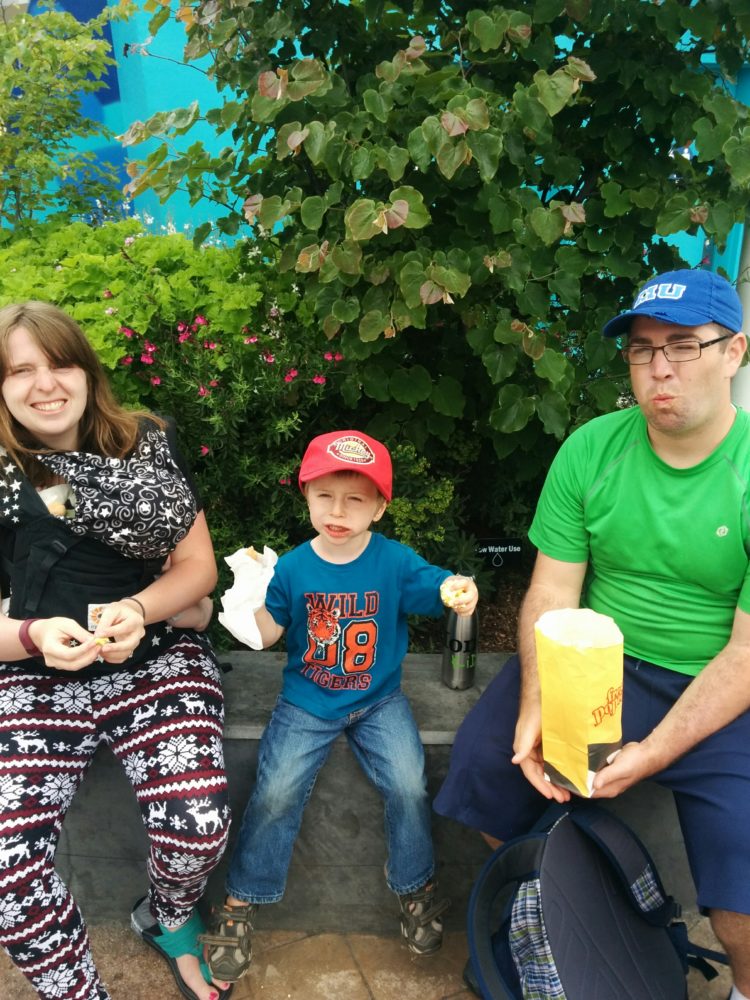 It may just be because I grew up in Colorado, but I thought it was just as neat as the animals to see all of the tropical plants growing naturally in and around the park. We don’t get these in our high-altitute, low-humidty climate: 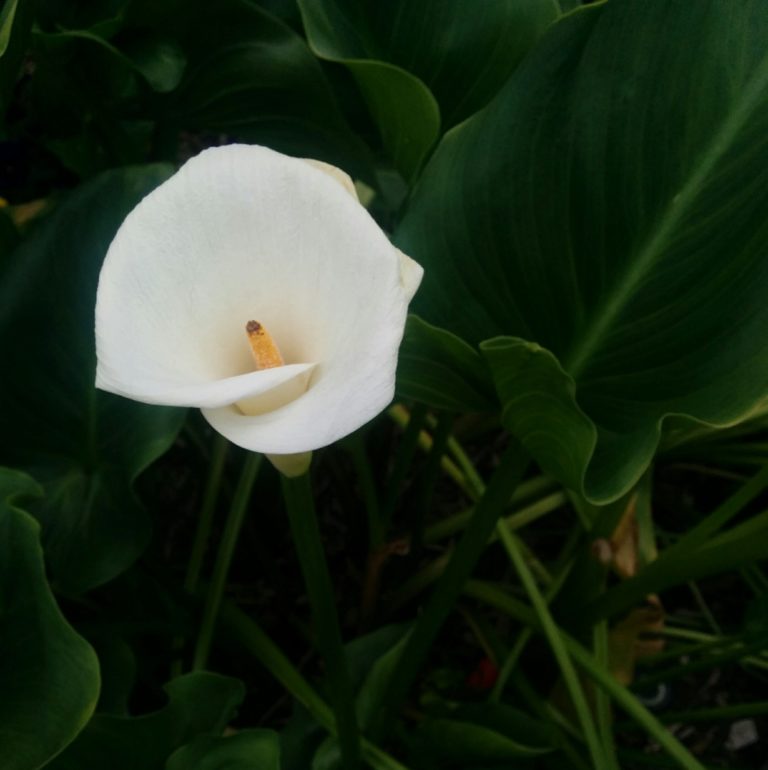 Use your  Sea World app or  complimentary maps to locate what you’re looking for, including restrooms. On the back of the map you can also find the times for the different shows throughout the park.

Admission to Sea World is a little less pricey than to most of the other theme parks, and there are  several different options. The most expensive one-day ticket was $119, and it included admission, CD of photos taken throughout your visit, and all the food and drink you want. Up close parking is five dollars extra but we felt it was worth the shorter walk.

Fabulous Easy Bolognese Sauce Recipe
Next Post: 17 Truths About Breastfeeding: The Good, The Bad, and Everything In Between