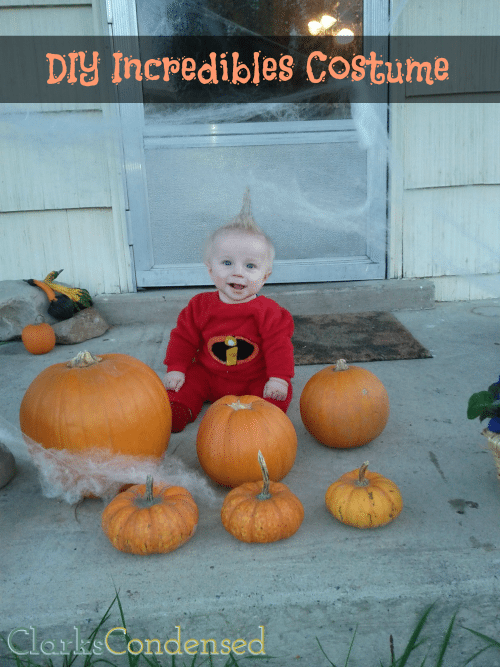 I love Halloween. Growing up, I always would beg my dad to get down all the Halloween decorations from the attic, starting at the beginning of September. I’m sure I drove him crazy with my constant begging, but I couldn’t hardly wait for all the fun of Halloween to begin. My mom always says I was their Halloween baby (as she went into labor with me on Halloween — thought, it wasn’t until November 2nd that I was born,) so I like to say that’s why I always have loved it so much.

Over the years, I’ve loved dressing up. Sometimes, I spent months deciding what to wear, and other times, I threw something together at the last second. As I got older, the more improv my costumes became. And once I got to college, I was thrilled when my roommates were as into Halloween as I was. Just for fun, here are my roommate costumes from my freshman and sophomore year of college. (if you are looking for the Jack Jack costume, don’t worry…it’s at the end of all this rambling.)

My freshman year of college, my roommates and I came up with the idea of a white trash wedding.  Don’t ask me why. It was kind of ridiculous, and I’m sure no one had any idea what we were dressed up as. It was so much fun though, and one of my favorite memories from that year. I was one of the bridesmaids. I know, totally cute. 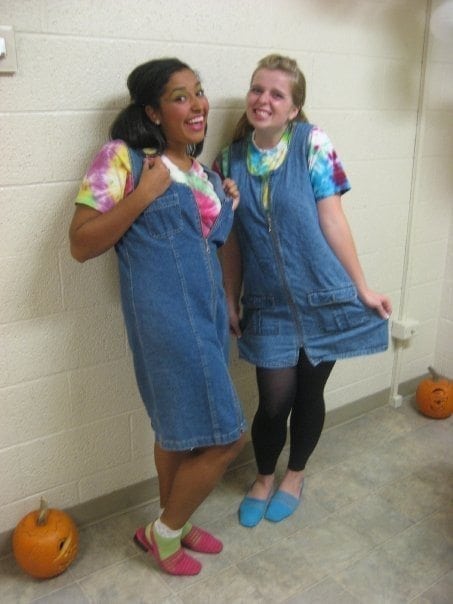 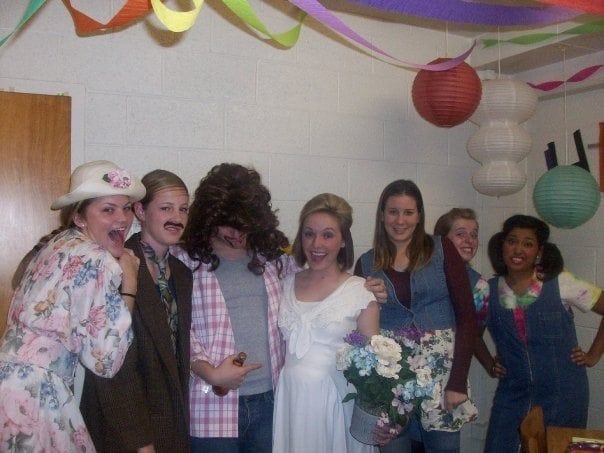 Sophomore year, I think our costumes just came together about 15 minutes before we headed out to a Halloween dance. We decided to be zombies. You better believe everyone at the dance wanted to hang out with us. Or not. Thankfully, this was a few months before I met Forrest. Not quite sure how he would have felt about me if that hadn’t been the case. 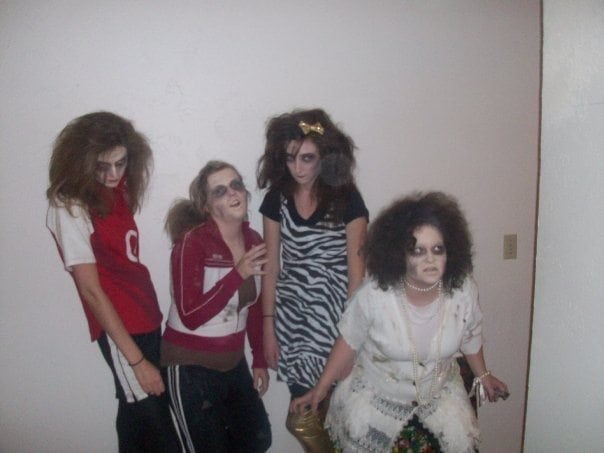 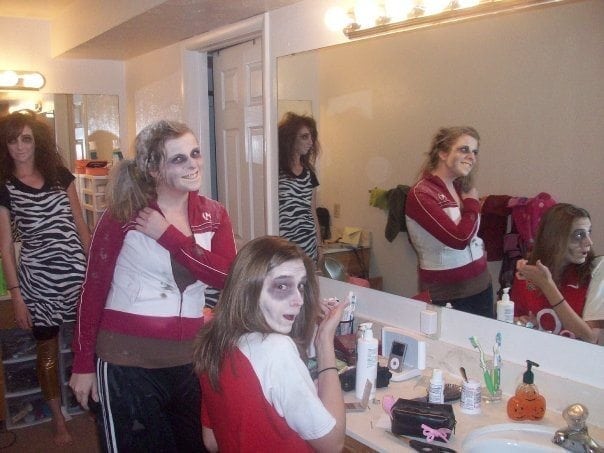 Moral of the story — my Halloween experiences as a single college student basically meant trying to be as ugly as possible. But still. It was so much fun.

ANYWAYS. Back on track. Sadly, for our first two Halloweens together, Forrest and I didn’t dress up. I couldn’t convince him. However, Jack seemed to soften his heart, and this last year, we decided to be a super hero family. This all started because I really wanted Jack to be Jack Jack from the Incredibles, because everyone always would say that’s what Jack looked like. At first, we were going to be the Incredible family…but…I got lazy. So, I made myself a Batman-esque cape (I was bat girl. or something like that) and Forrest found a random hoodie at Deseret Industries and became Green Lantern. Of course, the center point of our family costume was Jack…the one whose costume I spent a lot of time on. 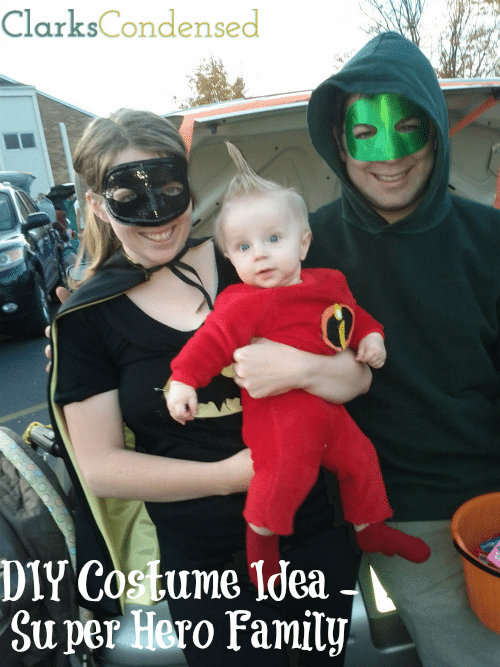 Is he not the cutest little Incredible you’ve ever seen? The costume was a headache at times, but it turned out well in the end. 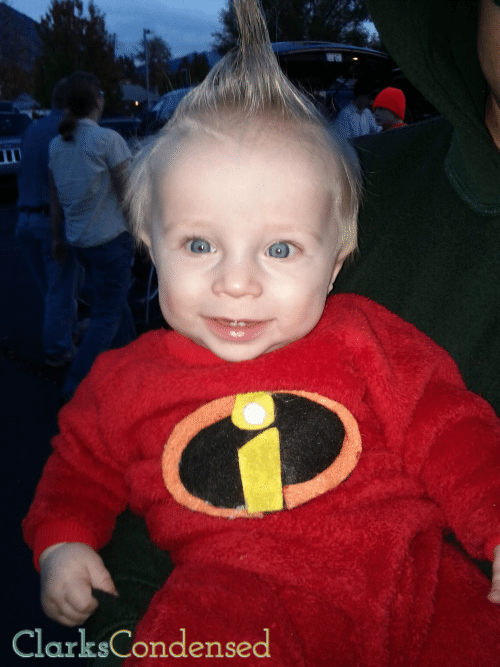 In order to make this, you’ll need the following

So, I used the pattern from this site to create the patch on his front. I saw various patches you could buy, but they all were so expensive, or took 30+ days to ship. This pattern was easy enough, but I highly recommend sewing it together if you can. I just used hot glue, and it was falling apart by the end of the night. It was an easy pattern to follow, though.

The hardest part of this costume was finding the footed pajamas. If you look at these pictures of Jack-Jack, you’ll see he’s in pajamas, and most of the tutorials I found just had their kid wearing a red top and red pajama bottoms. That works, but I was convinced that I had to find the footed pajamas. After what seemed like an endless search, I found the perfect set at FootedPajamas.com.

I ended up cutting off the feet, with the intention of sewing them back on backwards — because I wanted his zipper to be in the back. This was a dumb idea, because I wasn’t able to sew the feet back on…so Jack just wore red socks. For the final touch, we spiked his hair up. As you can see, he had (and still does) a lot of hair, and it was perfect for spiking it.

Jack-Jack in the Incredibles wore a mask, but I knew Jack wouldn’t stand for that. You could also sew black onto the bottoms of the feet and around the wrists if you want it to look exactly the same as Jack-Jack. It was a pretty easy costume overall, and we got a lot of compliments for it! If you have any questions, let me know. I know my instructions weren’t that in-depth, but I’d love to help anyone that has questions!