Jack has been playing preschool since he was three, and Forrest has coached Jack four most of his seasons.

It’s been a really fun learning experience for everyone, especially as we’ve seen Jack grow and improve. His seasons are six weeks long, and he has really improved with each season.

He started out temperamental, and he would cry occasionally during his first season. Now, he is usually the best player on the field, and his last season he scored about six goals a game.

I’m a killer soccer mom who loves to sit on the sideline and cheer my little guy on. However, I don’t think I’d be the best at coaching – I think I’m a bit too emotional for that. Fortunately, Forrest has been an excellent coach and works very hard to make sure all of the children have a good time. 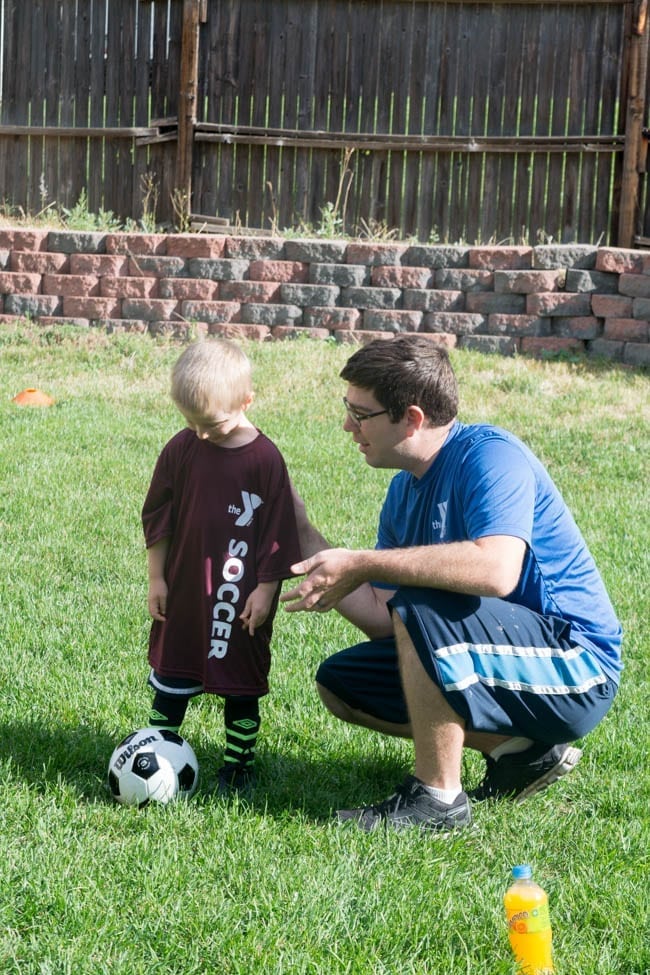 I’ve asked him to share some of his best tips for coaching preschool soccer, so I hope that these will be helpful for any parents out there volunteering for the first time.

Thank you to Tampico for sponsoring this post. All opinions are 100% my own.

There is no need to push the kids hard – they are only preschoolers. One minute water breaks every five minutes wouldn’t be unusual. This is especially important during the summer when heat exhaustion is a real danger. 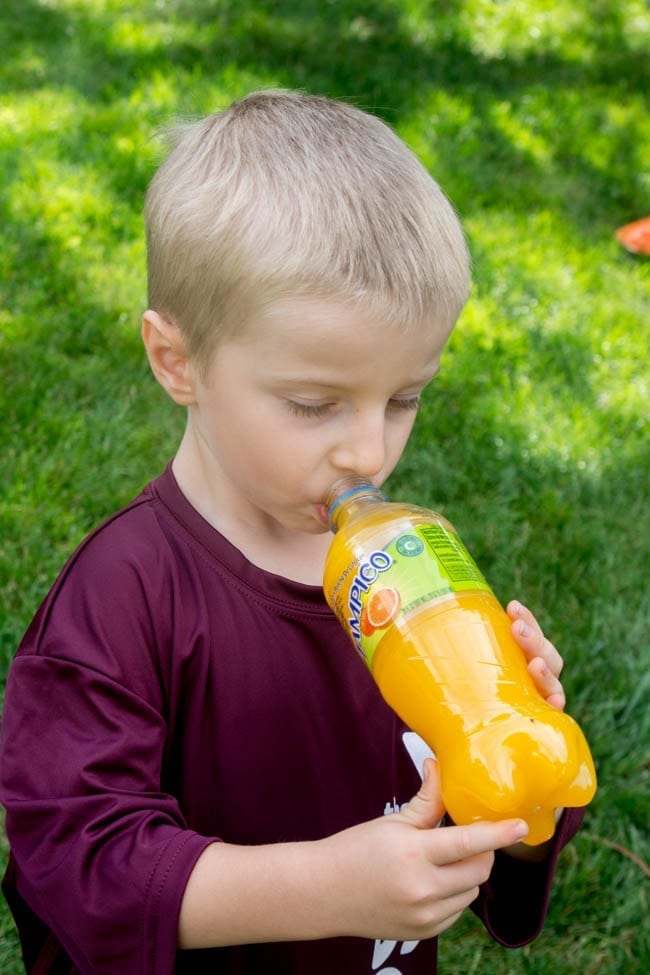 On day one pick out a team name.

I usually had the kids tell me their favorite animals, and if there were any duplicates I went with that. Then, I would add in the jersey color, so we had Red Rhinos and Green Cheetahs as team names.

This helps them understand that they are on the same team. Whether or not that will actually lead them to play like a team is a whole different story.

Mostly it just gives you something to call the kids on your team when you’re trying to get them to listen to you and stand in the right place facing the right direction.

The main/constant goal is to keep the kids on the field and engaged.

This is a lot harder than it seems. A lot of kids who have just started or are on the younger side of things will cry just by being asked to stand on the field. Every little challenge above and beyond that can be a serious obstacle for some kids.

Take it slow, let parents stand with their child at first to help them get acclimated, and usually they will get more comfortable over time.

There is a big difference developmentally between a kid who has just turned three and a kid who turns five during the middle of the season.

During Jack’s first season, he was barely three, and it was a struggle get to him to even stay out there. He was so distracted half the time, and he just wanted to play around. This year, as I mentioned, he’s a rock star. Be patient.

Start small and work your way up as best you can.

Start with something that everyone usually can do. Once a child feels like they are successful in at least something they will feel more comfortable. I heard of a coach playing Duck, Duck, Goose every practice instead of actually practicing (much to the parents’ dismay). The kids can and usually want to do more than that. 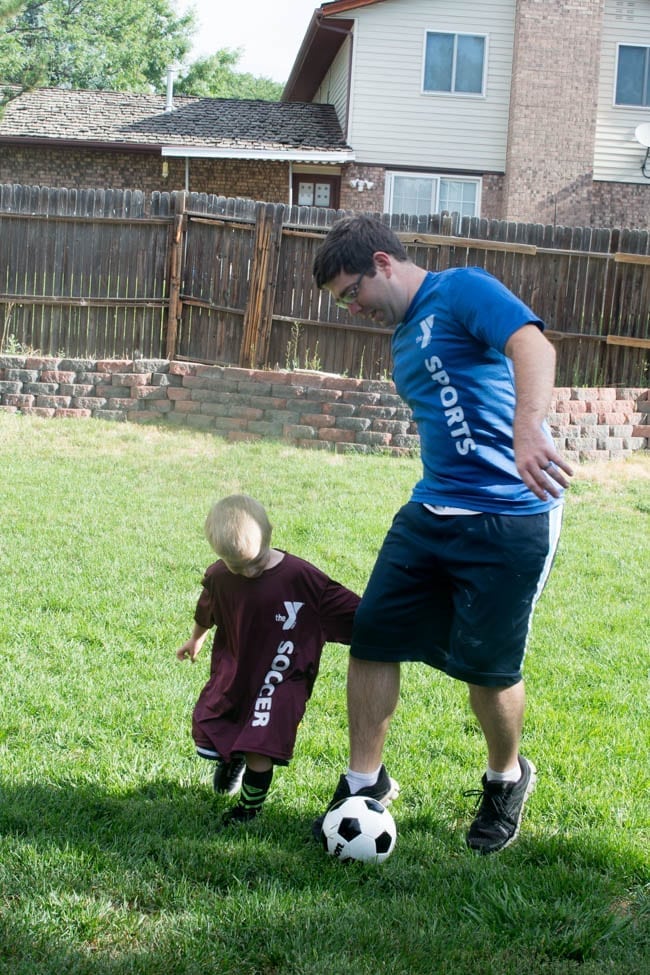 This is my favorite warm up activity. Usually, kids are already familiar with the concept of the game, but if they aren’t it takes about one minute to explain. Don’t make the activity into a race, so kids won’t feel sad if they lost.

Sure, they need to learn coping skills eventually, but preschool soccer doesn’t have to be that place. Plus, red-light-green-light helps kids to practice listening.

Encourage Parents to Help, But Not Play for Their Child 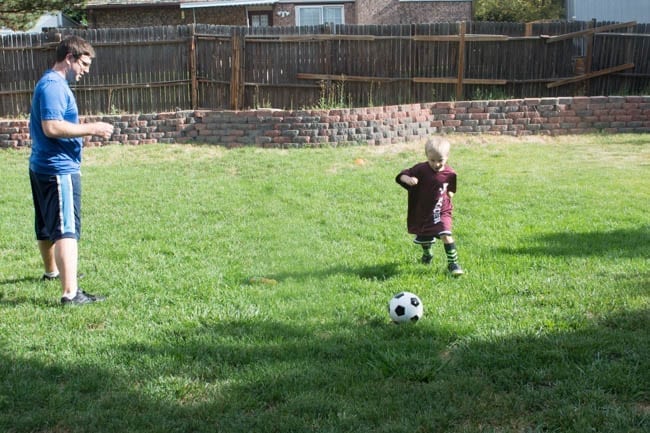 Having a parent place their child in front of an opposing player with the ball during a game never seems very helpful. They few odd times that I have seen this happen the child hasn’t suddenly started playing better afterward. Mostly, the child just tries to resist their parent, and the kid ends up not wanting to play.

Mostly, the child just tries to resist their parent, and the kid on other team is unfairly disadvantaged. Let the child watch the natural flow of the game, and eventually they will feel more comfortable on their own schedule.

The best kids don’t shy away from contact, but they don’t look for it either. 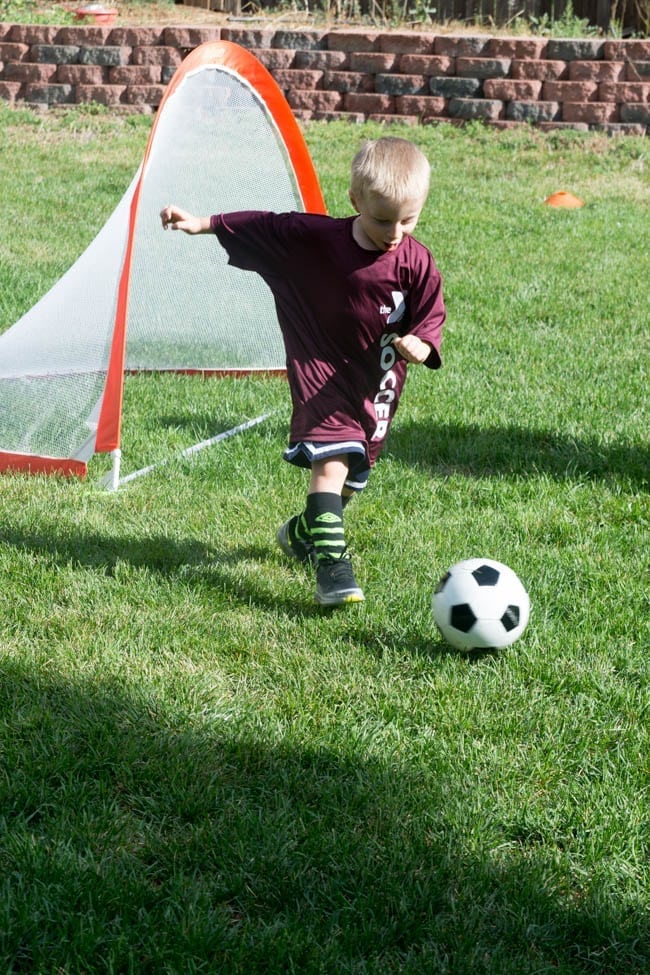 The best kids at this age will try to dribble around the mob of players chasing the ball. If a kid doesn’t want to chase the ball in the mob as most kids do, try to have them play defense.

Have them stand near or in front of the goal so the other team has to come to them. This can help slower (foot speed) players participate in the game more. Jack started doing this a lot in his second season, and it really helped him feel more confident.

It is very helpful to assign a parent to manage the snack schedule. They can contact the other parents and manage the schedule so you don’t have to. A lot of parents like to help and contribute, and they are willing to volunteer to help with snacks or on the field. When it isn’t being managed, you might end up with a week with no snacks, which will make everyone sad. You may want to have some extra snacks in the back of your car each week….just in case.