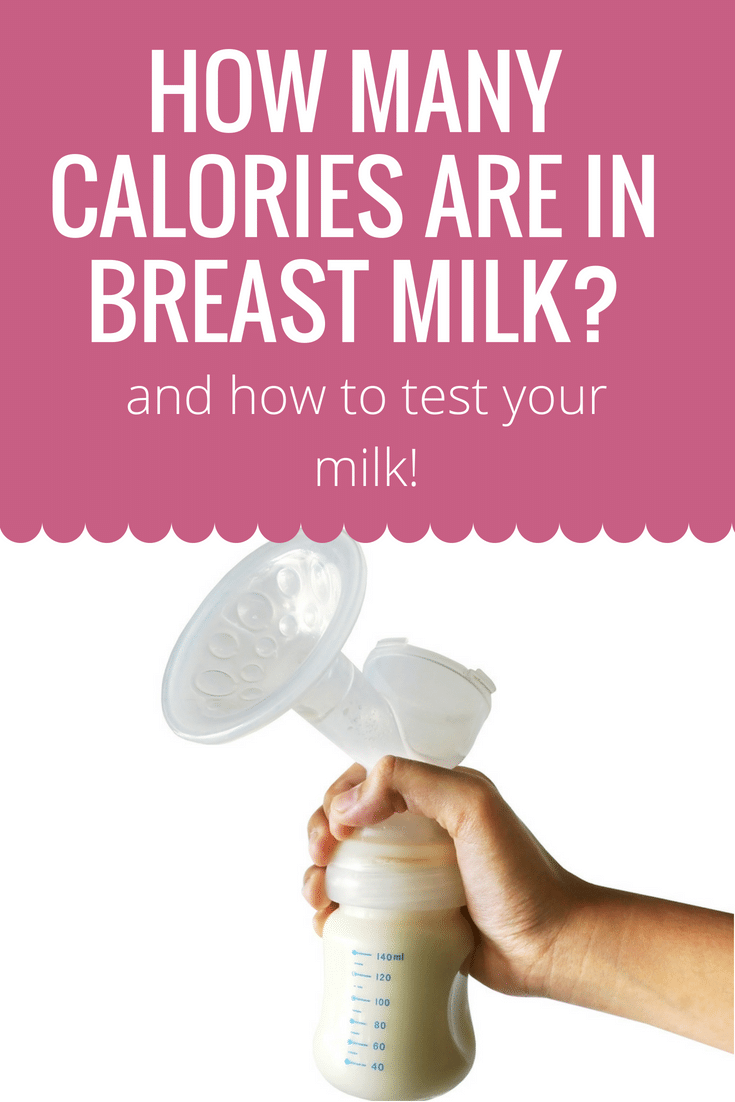 How Many Calories in Breast Milk

Breastfeeding requires a lot of trust and faith in yourself.

It can be hard to keep on nursing your baby without knowing exactly how many calories your baby is taking in – or even how much!

While there are certainly mothers who will have struggles producing enough milk for their baby, for the most part, your body creates what your baby needs. It’s pretty incredible!

But it’s still normal to wonder what exactly is in breast milk – and if you can do anything about the caloric and fat makeup! This question gets asked a lot in our breastfeeding mamas’ support tribe. So I thought it was about time I wrote a blog post about it.

Sometimes a mother will be told by a well-meaning medical provider that perhaps her breast milk doesn’t have enough calories in it. It’s really hard to

How Many Calories are in Breast Milk?

According to Kelly Mom, the average amount of calories per ounce of breast milk is 22 kcal, with a range of 13-35 kcal. There is an average of 1.2 g of fat per ounce.

These are, of course, averages. Your body tends to produce milk based on baby’s current stage and age, so it’s very possible that the caloric content would be different at different times during baby’s life.

If you are finding yourself staying up late at night worrying about your breast milk’s caloric content – you can rest a little bit. Research shows that the volume of milk is the only thing that really matters in regards to infant growth with breastfed babies – not the number of calories or fat.

How to Add Calories to Breast Milk

Sometimes mothers will be told that they need to fortify their breast milk for one reason or another. Sometimes this is necessary with slow-growing infants or those that are in the NICU.

I can’t really give you advice on the best ways to fortify your breast milk – I would recommend working with an IBCLC or another medical professional to determine that. However, here are a few common ways:

There is a correlation between more fat being consumed when a baby is nursing from a more empty breast. So if you nurse frequently, your breasts will be more “empty”, which tends to produce fattier milk. It’s a good idea to nurse every 2-3 hours and allow baby to fully drain each side if they want to – and then start the next nursing session on the side you finished on.

Does Breast Milk Have More Calories than Formula

This will vary depending on the mother – some mothers will have more calories, others less.

On average, infant formula has about 20 calories per ounce, which, compared to the average that we know for breast milk, is about 2 calories less than breast milk. There are formulas that are higher calorie, though these are typically used for infants in the NICU or who are having trouble growing.

To put it short, breast milk has everything your baby needs – nutrition wise – for the first six months of life. After six months, they still need breast milk as their primary source of nutrition, though at about that point, the iron stores are somewhat depleted.

As a basic overview, here are the main categories of what is in breast milk:

And in this post, it goes over all of these in more details.

You May Also Enjoy: Sudden Drop in Milk Supply? 15 Things That Might Be the Culprit.

A few months ago, the company “Lactation Lab” reached out to me on Facebook. As soon as I found out what they offered, I was immediately on board, because it’s something I would have loved to have when Oliver was a baby – especially when his pediatrician was convinced my milk didn’t have enough calories.

Basically, you send them a sample of your breast milk, and within a few weeks, you will receive a comprehensive report going over everything that it discovered about your milk – including how many calories.

When Oliver was a baby, the only way I knew of to test your breast milk was through a local milk bank – and that was only if you were donating. I’m not even sure if they would tell you. I just know that they had to test it before they gave it to babies in the hospital.

Anyways, Lactation Lab has made testing a lot more accessible to mothers, and I’m super excited about it.

They offered to let me review it on our blog – and since I’m no longer breastfeeding, I asked my friend, Brittani, if she would do it for me. She was very enthusiastic, and she provided the following review.

But before I get to that, I want to talk about who I think should test their breast milk. As with most things, I really don’t think it’s necessary for the majority of mothers. But I also believe it can be a tool to give mothers peace of mind and help keep them nursing when they quit otherwise. Here are a few times you may want to consider testing your breast milk:

The process of sending in my milk to be tested was really easy! The package came with 2 graduated cylinders that they asked me to put 30 mL of milk in.
Because the instructions said to put milk in that was collected within 24 hours, I came home from work on a Friday and put 30 mL in each container from milk I had pumped at work that day.
Then I put the milk and the ice packs in the freezer. On Monday I packaged it up and sent it to the post office with my husband. It was really easy!
I received my results about two weeks after I sent them in. They say that it will take 3 business days to get back to them and then 3-5 business days after that for them to run tests and interpret results.
I was honestly surprised by some of my results! I was low in calcium, iron, vitamin C, and B12. The doctor made personalized recommendations for me based on what was low and as such I will be changing my diet and adding some supplements in. I wish I would have known this information at the beginning of breastfeeding so that I could have made changes then.
There are two different options for testing your breast milk through Lactation Lab. The first one will test your breast milk’s caloric content, fat content, protein, and carbohydrates. This one costs $99.
The premium test kit – which is the one Brittani used – tests about 17 other characteristics. You can see the difference between the two here. It is quite comprehensive and costs $299.
Click Here to Your Breast Milk Analysis Kit 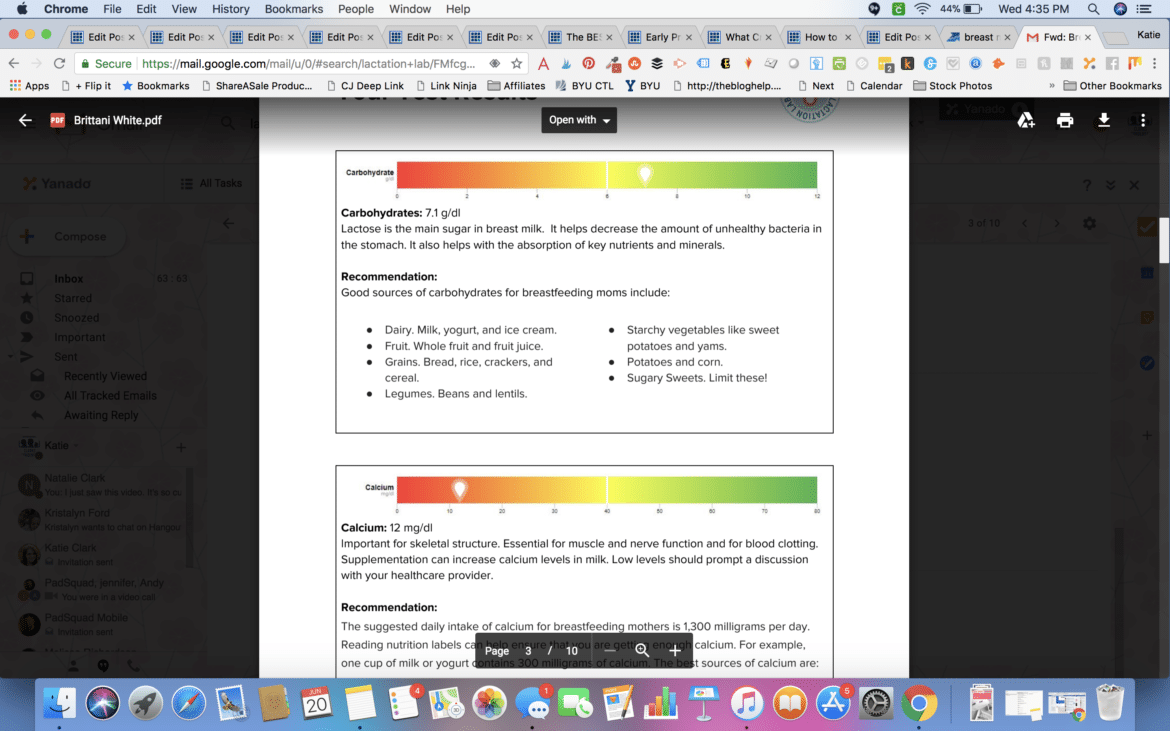 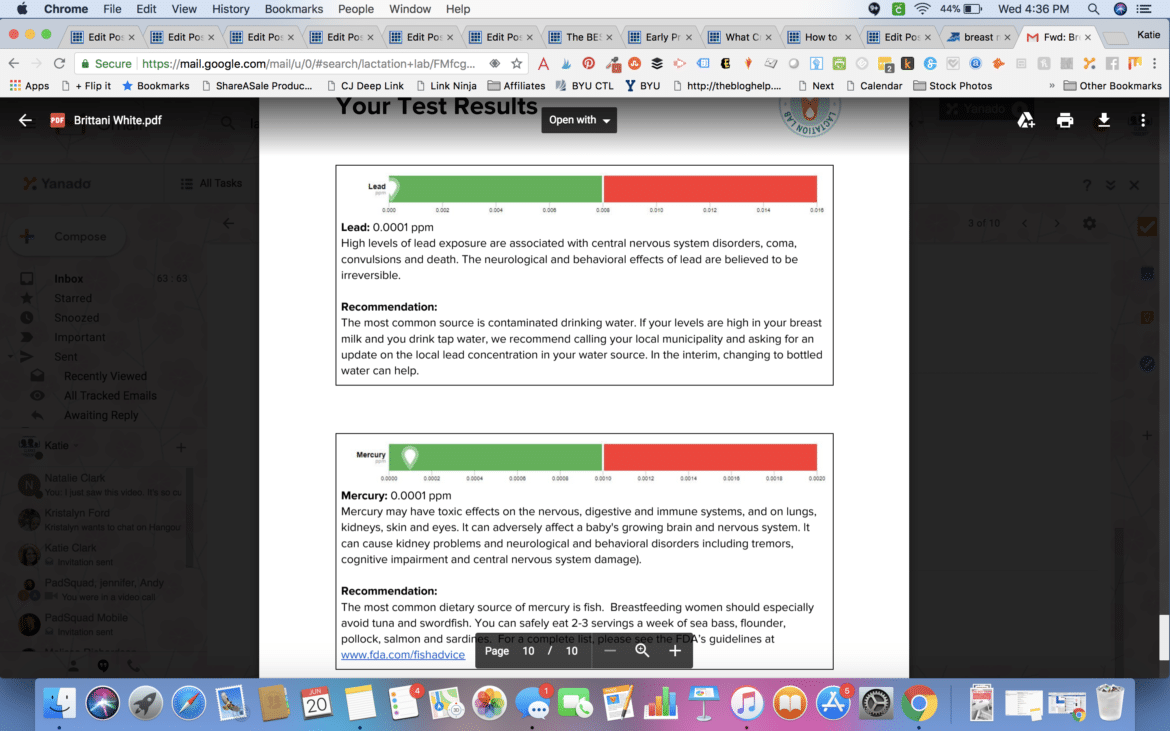 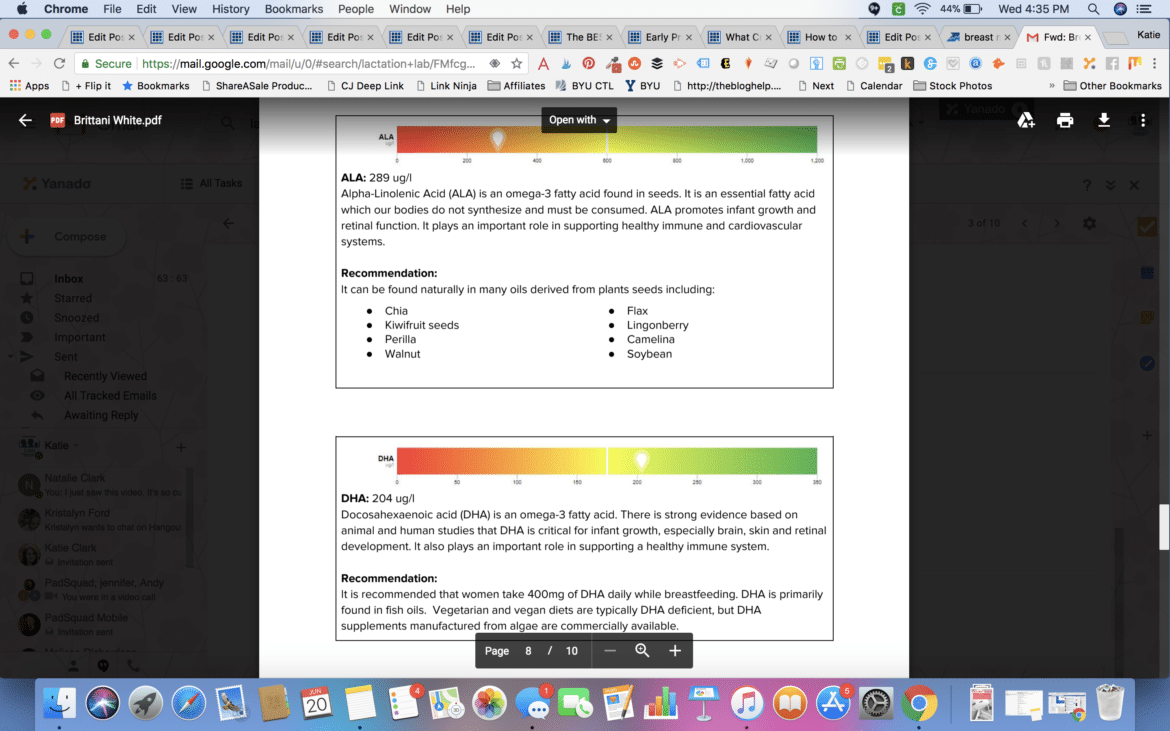 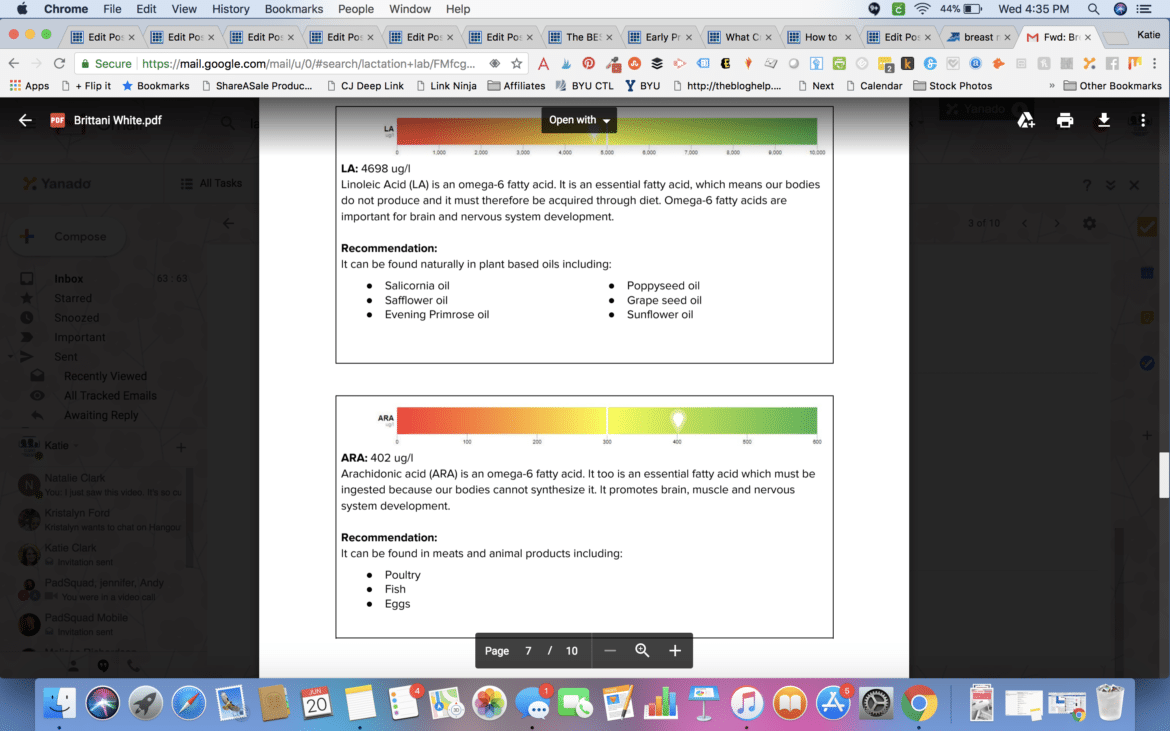 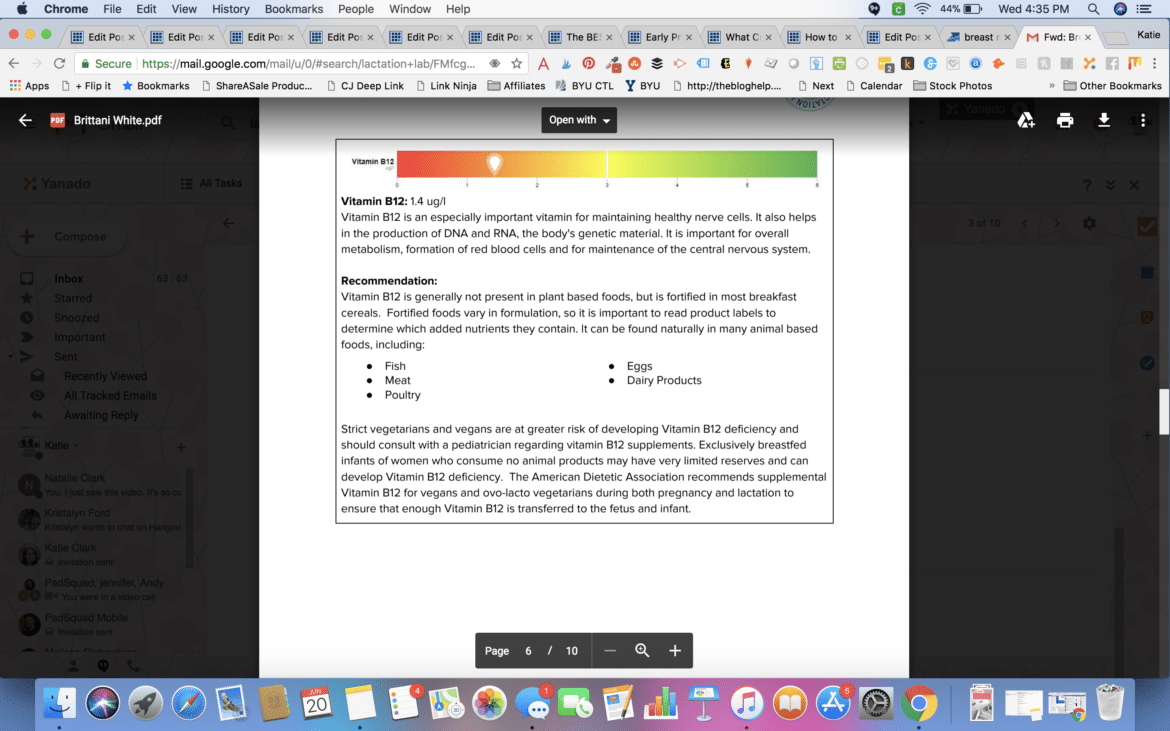 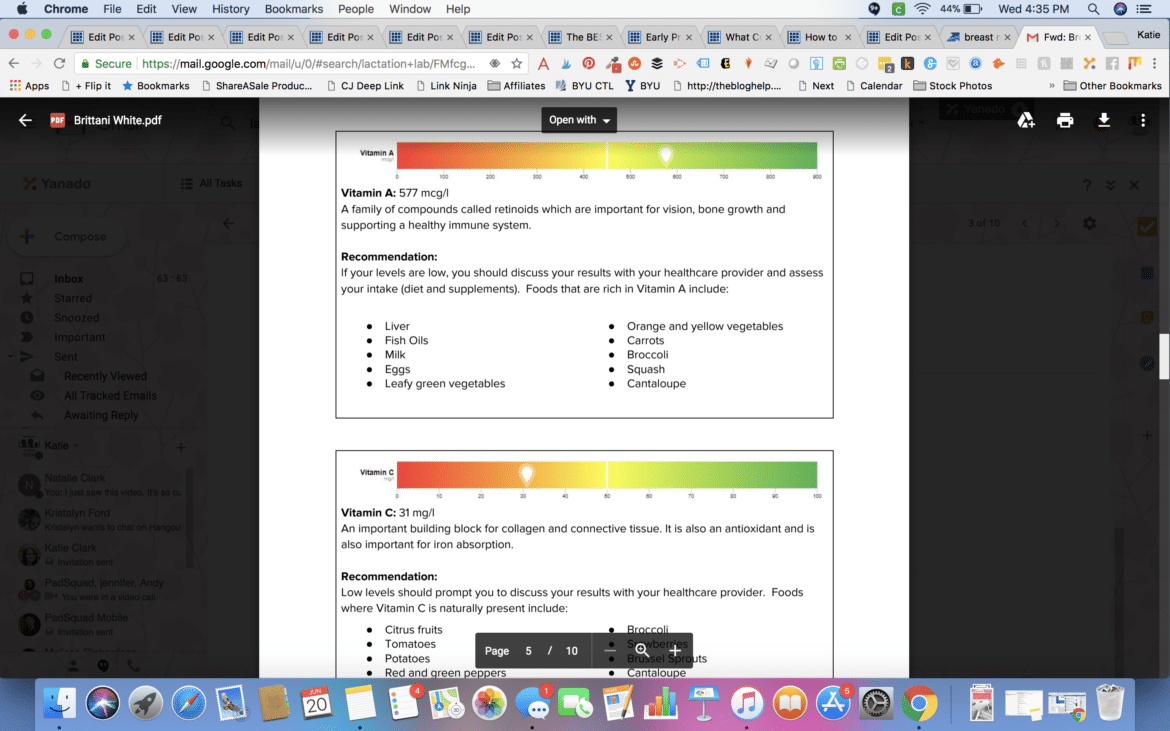 The BEST Quick Dinner Rolls Recipe – Ready in less than an hour
Next Post: The Best Things to Do in Colorado Springs for Families