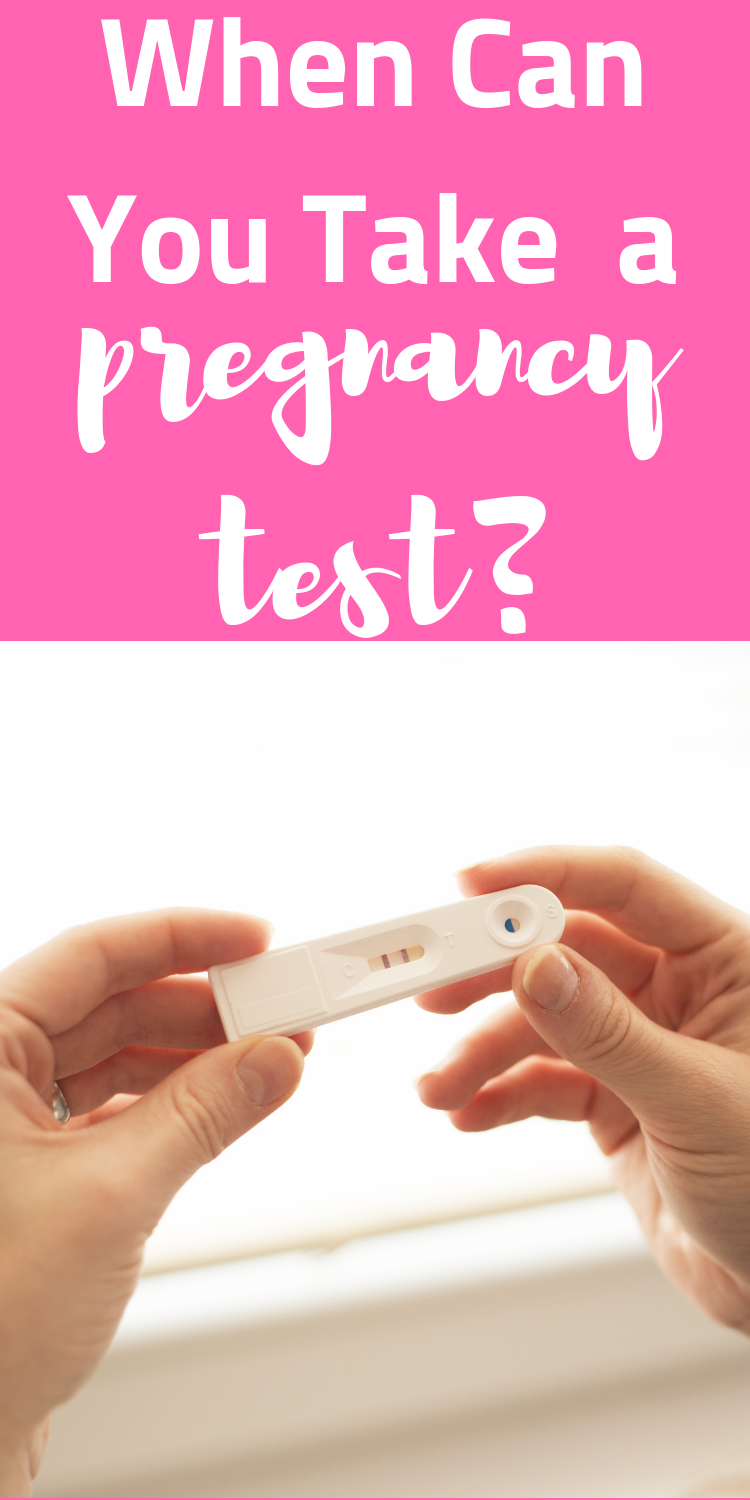 When can I take a Pregnancy Test

As soon as you start to try and conceive, it can be hard to resist taking a pregnancy test early.

The box just seems to be staring you in the eye as you anxiously wait for the time where you *might* be able to tell if you are pregnant.

Having been in many mom groups online over the past seven years or so, I know that people obsess over pregnancy tests – when they can take them if anyone can see a faint line, and whether or not a false negative happens very often.

ANd I get it! Getting pregnant is a big deal wrought with many emotions. And waiting to get the positive sign can feel like it takes an eternity.

A few months ago, I made up a silly little “Online Pregnancy Test“, and it’s become one of our most searched posts! Sadly, this test will not tell you if you are pregnant (just give you the likelihood of you being pregnant), but I realized just how much interest there is in about taking pregnancy tests.

So in this post, I’m going to share all that you need to know about when to take a pregnancy test – and what to do with the results.

When to take Pregnancy Test

How Soon Can You Take a Pregnancy Test?

With that said, I was curious how many people got a positive before or after their missed period. I turned to my breastfeeding support group, and I was intrigued by the results.

I surveyed 178 women, and below are the results:

The majority of women seemed to get a positive test when they tested more than one day before their missed period. The thing that I found interesting was that the next highest number at 37% didn’t find out until after their missed period. However, that could be that they didn’t test until after. Obviously, this wasn’t a super scientific test, but the results were interesting, and it does make me rethink things a little bit!

If you don’t have a regular period, I would wait about 14 days past when you ovulated, as that’s when the pregnancy hormone is typically detectable and your baby has implanted into the uterus.

If you are trying to get pregnant, I highly recommend downloading a cycle tracking up – such as Ovia – and using some kind of ovulation tracking. Ovulation testing strips are SUPER cheap (Wondfo are popular, as are Pregmate). The Ava bracelet is also SUPER popular for tracking ovulation, and there are quite a few women who have used it successfully to become pregnant (you can use the code clarkscondensed for free shipping!).

There’s a lot of debate on this out there – what is the best pregnancy test!

There are simple ones that are just strips, while there are super fancy ones that actually say “pregnant/not pregnant”. Obviously, you can guess which ones are most expensive.

A lot of people swear by the Dollar Tree tests – in fact, I’ve heard that this is what a lot of doctor’s offices uses…and really, you can’t beat a dollar.

I’ve used e.p.t. and First Response in the past, and I think they’ve both worked well and have been accurate. Some people like the ones that say pregnant/not pregnant, simply because it takes away the guesswork of trying to decide if a line is actually there or not. But I think for most

I know many people recommend using tests that have pink dye instead of blue dye because I guess blue dye produces more evaporation lines/false positives. But honestly, I don’t even remember what the tests I took said 🙂

Did you get a negative pregnancy test? There can be so many emotions tied to seeing the test come back negative. Keep in mind that it can be totally normal to take up to a year to get pregnant, even if you are entirely healthy and fertile. As I said to a friend tonight, the attitude I tend to have is, “Hope for the best but expect it not to happen.” Ha! Not very motivating, but it can take some time 🙂

Is it possible to have a false negative test? Absolutely! When I did my survey in my group, several women commented that they didn’t get a positive pregnancy test for several weeks. While this certainly isn’t the norm, it can happen.

So what are some reasons for a false negative pregnancy test?

This can be the most frustrating conundrum – you’re several days late, but you still haven’t had that positive pregnancy test. Believe me, I’ve had this happen, and it can be really emotional!

I’ve written a post in the past all about the reasons why this might happen, so I’ll just direct you over there to learn more about this 🙂 Missed period, negative pregnancy test: Could You Still Be Pregnant?

Well, I hope that this post has helped give you a little more insight into when you can take a pregnancy test! I hope that you’ll be seeing those two lines soon 🙂

Pregnant? Yay! Here are some other early pregnancy posts you may enjoy: