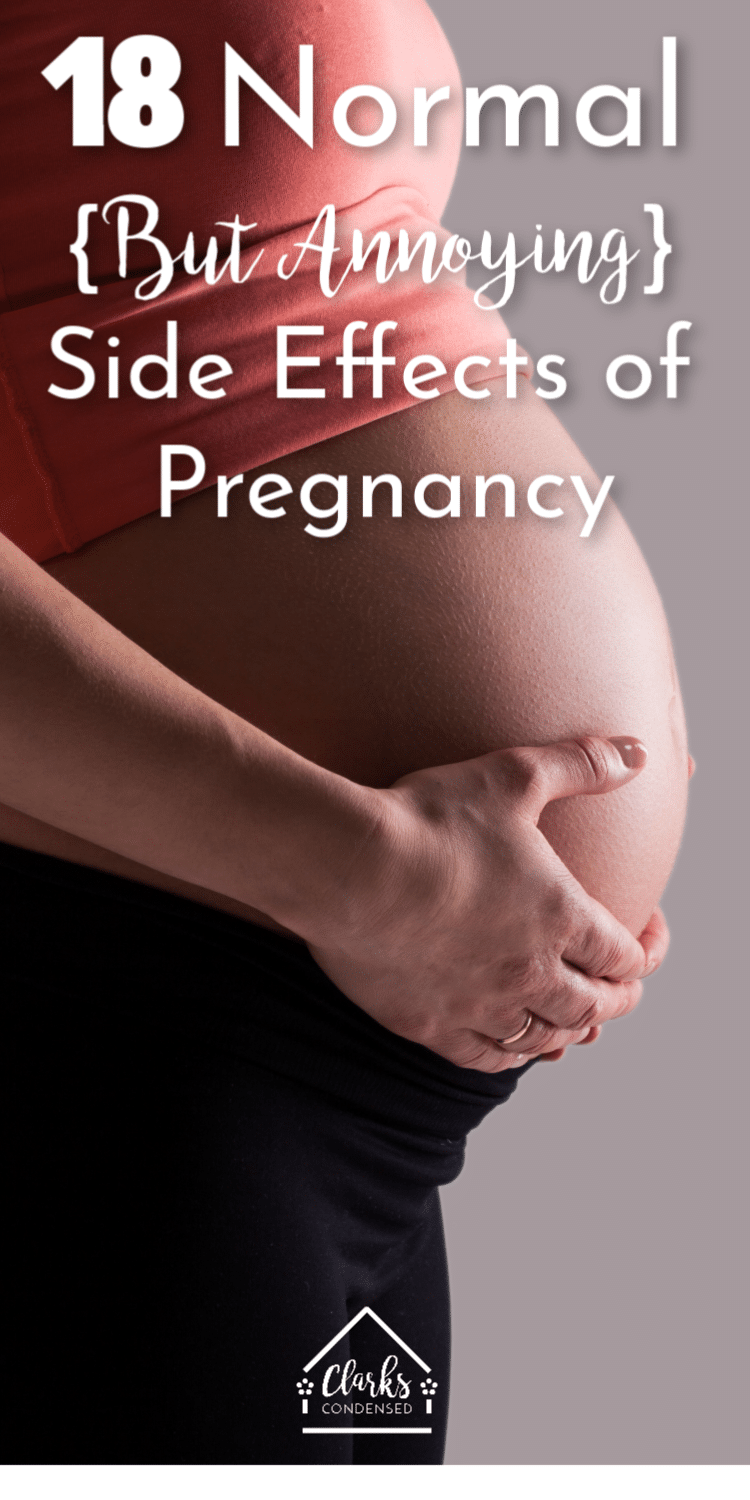 There are all sorts of lovely side effects of pregnancy.

While most people seem to focus on early pregnancy symptoms that come during the first trimester – I don’t see a lot of talk about other side effects.

Yes, morning sickness plagues me throughout my pregnancies, but there are definitely other issues that pop up.

As I approach my third trimester, I’ve started to experience some of the side effects I’ve had with other pregnancies, so I thought I would talk about some of the normal – but annoying and uncomfortable – side effects of pregnancy you may not hear about otherwise.

While you are suffering through these, make sure you take a prenatal hospital class. If you can’t stand the thought of leaving your house, this Online Prenatal Class is the best and will have you prepared as much as possible for giving birth. You can get 10% off with the code CLARKS.

The first time I got a charley horse during my pregnancy with Jack, I got so freaked out.

I wasn’t sure if I had a blood clot or if my leg was falling off. All I knew is that it HURT.

A Charley Horse is just a term used to describe a sudden leg cramp. They typically come on quickly, are painful, and even when the worst of it is over, there may be continued pain for a while after.

They are common to have during pregnancy, especially the further along you are. I usually start to get them at the end of the second trimester.

I had them probably every other night with both Jack and Oliver, and with this pregnancy, I’ve had them a few times. However, I think I’ve found some treatments that help:

I honestly think Magnesium is one of the best supplements because it helps with so much! Pregnant women are recommended to get around 350 mg of magnesium a day. I have heard great things about the Natural Vitality Calm brand – just ordered it myself!

I started getting acid reflux during my first pregnancy, and it really never went away. It is pure misery though during pregnancy.

In fact, one of the first signs to me that I’m pregnant is that my existing reflux suddenly gets 100x times worse.

I personally control mine with medication, because it’s just so bad. My doctor had to be switch to ranitidine, but it didn’t help, so I was able to switch back to omeprazole.

Not everyone will need a prescription medication – many can manage it with TUMS, dietary changes, or even Apple Cider Vinegar (that’s what my midwife swears by).

Here is an article I wrote about acid reflux during pregnancy for additional information.

I think that all “gross” bodily functions just get exacerbated during pregnancy – and harder to control.

I burp all the time starting about halfway through the second trimester. I will just be breathing normally – not having eaten anything recently – and I will just burp. I will burp in the middle of the sentence. My boys think it’s hilarious.

This is another one that a lot of pregnant women experience. I mean, everyone passes gas – but the internal digestive organs get pushed away so much during pregnancy – it makes it so things get a little looser and harder to control!

Don’t feel bad if you pass gas unexpectedly – or if it smells especially funky. Very normal!

When you walk do you feel a lot of pressure in your pelvis? You aren’t alone.

I was just telling the midwife I see the other day that I feel constantly like the baby is just going to fall out.

While a sudden increase in pelvic pressure can indicate a problem, it’s often something that just happens as the baby gets larger.

Swelling during pregnancy – especially in your feet – can be very normal. However, it can also be a sign of pre-eclampsia, so just be aware of the other signs.

For many women, it is very normal to have some swelling in the feet – especially the further along you get. My feet always swell when we fly in an airplane or go on a long road trip.

I found the best way to combat this is with lovely compression socks!

Again, feet swelling by itself isn’t necessarily a sign for concern. But be sure you know the signs of pre-eclampsia and always bring up any concerns with your medical provider.

A few days before I gave birth to Jack, I got my hair cut. The hairstylist commented on how full, shiny, and thick my hair was – and how she loves cutting pregnant women hair because it’s often that way.

Don’t be alarmed when lots of it falls out once the baby arrives, though 🙂

Hair does grow faster during pregnancy, and you typically have more of it. However, that isn’t just on your head!

It’s not uncommon to have your leg hair grow faster (which seems cruel, since most pregnant women can’t even see their legs after a certain point) and even have some unexpected facial hair growth.

Acne is definitely not just a hormonal teenager problem – it can plague the lives of many pregnant women as well.

Acne is typically a hormonally driven issue, and with your hormones going crazy during pregnancy – don’t be surprised if it happens. Some people claim it’s more common if you are having a girl.

My skin seems to break out during the first trimester, but then after that, my skin looks better than ever personally. But it is normal to have skin issues (not just limited to acne, even) throughout the entire nine months.

This is another one I personally suffer from, and I hate it.

I distinctly remember standing in the kitchen of our little apartment washing dishes when I was pregnant with Jack. All of a sudden my ears were plugged up, and I couldn’t get them unplugged!

Sadly, I’ve experienced this with all my pregnancies, and it really gets me grumpy!

I’ve already talked about this one in-depth in this post – Excessive Spitting and Saliva in Pregnancy. And it really is quite miserable.

I struggled with this until about 20 weeks with both this pregnancy and my pregnancy with Oliver. I had to carry a bowl or cup with me everywhere because the need to spit was just so intense – I would throw up otherwise!

This is one that I have been fortunate NOT to get during my pregnancies, but I know that many people do.

They are large and twisted veins that you can see on the surface of the skin. While they are primarily just a cosmetic issue, they can cause women discomfort and pain. Many women end up having surgery or laser treatments on them after pregnancy.

They typically manifest in the legs, but I’ve known women to have them in other more sensitive areas (such as the vulva).

Having issues with temperature regulation are definitely normal. For about the first half of my pregnancy, I was FREEZING, which was really weird. Because I’m not someone who usually gets cold easily.

The last half I’ve been having major hot flashes. Nights are so miserable!

I highly recommend having a BedJet though for the night – it is a lifesaver, especially if you are getting super hot at night.

I only have experienced this a time or two, but pregnancy can make blood vessels in your nose expand, which can cause them to rupture – resulting in a bloody nose.

According to BabyCenter, 20% of pregnant women will experience a bloody nose at some point or another!

This is one I experienced a lot with Jack and Oliver, but fortunately not so much with this pregnancy. It was not fun.

Dental health is SO important during pregnancy. I actually just read that as many as 18 in 100 premature births can be linked to dental issues, which is crazy.

BabyCenter estimates about half of pregnant women experience pregnancy gingivitis, which can partially be blamed on hormonal changes that cause your gums to be more sensitive to bacteria and plaque.

I think that having a good, electric toothbrush and flossing regularly can help a lot to combat issues. I really like using a water flosser for flossing.

This is also referred to as pregnancy rhinitis. Between 30 and 65% of pregnant women experience this while pregnant.

It’s primarily caused by – you guessed it – hormones! Those pesky hormones strike once again and can cause the lining of the nasal passage to swell, which can produce more mucus, and in turn, can cause you to feel congested.

Drinking lots of water, sitting in a steamy room, and using a humidifier can all help relieve the issue. A Neti Pot might help as well!

With your body expanding and baby getting bigger throughout those long 40 weeks, it’s inevitable that baby might start to run out room.

Feeling pain in the ribs is very common – albeit uncomfortable.

I actually just went into the doctor today because I’ve been having pain under my left ribcage that has just gotten worse and worse – almost debilitating. The nurse practitioner I saw felt it, and I had a lot of inflammation at one of the junctions below the rib cage – also known as costochondritis.

It’s not harmful, but boy, is it painful! For me, it’s exacerbated by laying down and leaning over. I was told I can use a heating pad and to avoid leaning over – but beyond that, I just have to suffer through it for the next few weeks!

This is one that a few people mentioned when I posted the question on my Instagram page – smelling something that wouldn’t normally be pleasant, but really loving it…and even craving the smell of it!

And finally, one that I think most women have experienced at some point or another in pregnancy – a smell aversion. Pregnancy does give you a heightened sense of smell, and it can be pretty unpleasant.

Sometimes it can trigger morning sickness, but for many, it might just make you want to avoid certain rooms or foods for a long time!

I remember when I was pregnant with Oliver, Forrest cooked some bacon…and I swear I could smell it for weeks afterward. And it was not something I enjoyed smelling.

And does your spouse smell pretty bad during pregnancy – no matter how many showers they take? Don’t worry – that’s actually VERY normal. I couldn’t stand the smell of Forrest when I was pregnant with Jack. Oddly enough, when I was pregnant with Oliver, I couldn’t stand the smell of Jack. This pregnancy, I am happy to say I am able to be around my whole family without holding my breath 🙂

And there you have it – if you’ve experienced any of these, be sure to comment below!

Other Posts You May Enjoy

Buying a House for the First Time: Everything We Learned
Next Post: Kids on 45th Review + Promo Code: A Thrifty Mom’s Dream