It may see impossible to forget that you are growing a human child in your womb, especially after you start to experience all those fun pregnancy symptoms, have a large belly bump, and feel the baby squirm and kick inside of you. But, sometimes you just don’t “feel” pregnant, or you just kinda forget that you are, in part because you aren’t used to the new girth around your mid-section, or that your body really has changed and you are now incapable of doing things you once did just a few months before with ease! So, today, let’s talk about some of those unexpected, and perhaps embarrassing, moments of pregnancy that happen, really only because you forget your body is different now. 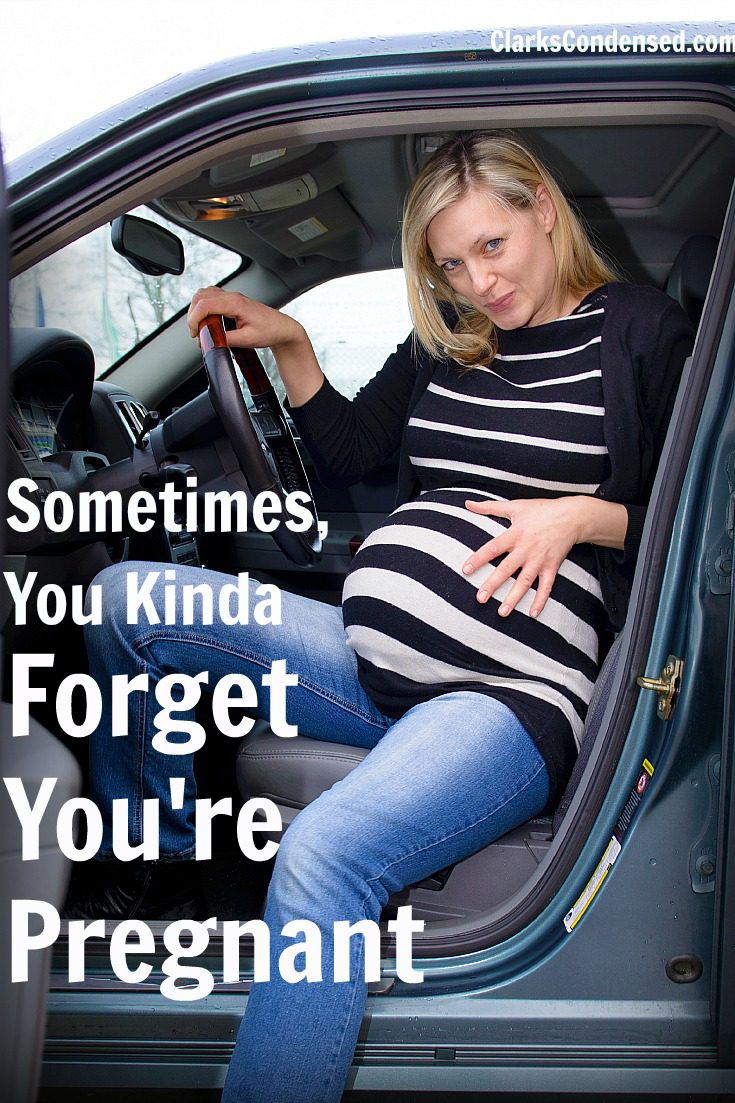 During my first pregnancy (a twin pregnancy) I was going to school full-time. I was taking a figure drawing class, where I had to sit on these awesome wooden or metal stools with no back support and draw people for three hours. Well, sometimes I would try to squeeze between my peers’ giant easels only to remember that I could not just suck in my gut, and ended up knocking into and over a few people’s drawing boards or supplies. Because, as large and pregnant as I was, I still felt like a skinny person!

And that feeling of disconnect with the length and size of your belly, and thin person mentality (or at least thinner), led to lots of moments were I kinda forgot I was pregnant. And as I asked around, I discovered I wasn’t the only one who forgot the amount of space their belly occupied.

Several women admitted to forgetting they were pregnant when the opening the fridge door and it hit their belly. Others bumped into the pan on the stove while cooking, thinking they were further away than they were. My friend Diane E. used to accidentally turn up the heat on the gas stove from bumping her belly into it. She ended up taking the knobs off and just using the stems!

I know I would often go to give someone a hug (like my husband who has his own belly) and remember that I needed to shift to the side in order to properly give the hug, otherwise I would find myself squatting down, or leaning forward, and just feeling all sorts of awkward. Hugs are just different when you are pregnant!

Then there are those fun moments when you go grocery shopping and try to squeeze past your shopping cart at the checkout lane, only to get stuck next to it, and have to ask the people behind you in line to back up so you could get to the other side of the cart (like frequently happened to my friend Dara P).

Speaking of the grocery store, Ann (of Little Worlds) once took out an entire row of cereal boxes at the supermarket trying to quickly squeeze past a trolley. She then tried to pick them up but couldn’t as she was 9 months pregnant, so she had to awkwardly walk away and pretend that never happened!

My friend Amanda (of Dirt and Boogers) knocked over an entire display of those individual things of coffee creamers with her belly when she scooted over at the Chick-Fil-A counter to make space for someone to stand next to her.

There are also those moments when you still think you are that tough girl despite your pregnant status, and can still accomplish amazing feats of strength and physical fitness. And even if you do have a fit and active pregnancy, your body has changed, and is pumping way more blood and needs much more oxygen than ever before. My friend Alma (of A Conquered Mess) would often forget she was pregnant while jogging, that is until she was huffing and puffing like there’s no tomorrow! I often find myself out of breath from trying to run up our stairs, let alone trying to jog!

And then there are those moments when you are trying to carry things, like a box, and it’s just super impossible to balance the box on a hip or on your belly. Or when you think you can jump up and down with your other kids, only to regret it immediately when you feel the heavy weight of your abdomen come down, or have a searing flair of round-ligament pain, or the hardening of your abdomen. Or perhaps when you have to then take a little trip to the bathroom.

Even singing can be a great feat of stamina while pregnant! My friend Lara (of Overstuffed Life) is an opera singer, and was always shocked that she had to breathe three times as often while singing arias when she was pregnant.

Then sometimes you’ll try to get closer to the table you are eating at, only to keep moving the table, instead of actually getting your torso any closer. My friend Ashley W went on a date night with her husband and actually got stuck (wedged) in a dining booth! She then tearfully explained to the teenage hostess that you do not seat pregnant women in booths when there are plenty of free standing tables! Her husband had to basically lift her out of the booth! 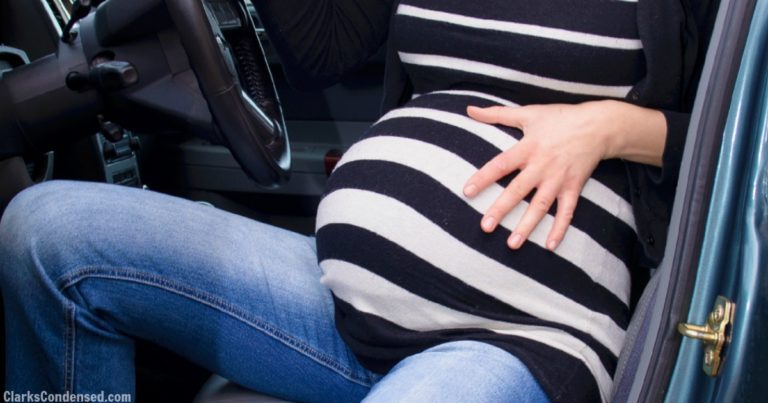 And that reminds me that you shouldn’t get comfortable in a bean bag when heavily pregnant. You may never get out of it again. And when you do get out, it might cause you some pain, definite embarrassment as you roll and assume some less than flattering positions. I know it’s always difficult for me to pull myself up out of our low-to-the-ground car when I am pregnant and being able to lean far enough to shut the door.

When you are pregnant, you don’t have the same flexibility, so you’ll want to be careful with trying to pull off any sexy positions in the bedroom too. A friend once tried something and just got horrible ligament pain in her belly.

And sometimes there are pregnancy forgetting moments on the job. Melissa (of Fireflies and Mud Pies) used to trigger the emergency call button on the elevator in the school she worked at with her belly! (“No emergency here, just a pregnant woman trying to squeeze onto an elevator!”).

And Jacquie (of KC Edventures) was five months pregnant and presenting at a school when she had to get up on stage. Normally, she would just hoist herself up on the stage from the front, instead of using the stairs. However, when she did it this time, that extra bump got in the way, so she had to kind of roll up on the stage in front of 200 teachers and then get to a standing position all while trying to talk! Once she got up, she smiled really big and said, “Ta-da!” and then let them know that she had forgotten she wasn’t as agile as she was a few months ago.

And Jamie (of Hand Made Kids Art) would often take blog photos only to find her bump ending up the shot.

So, tell us, have you ever kind of forgotten you’re pregnant? What happened?