You’re pregnant! Congratulations! Being pregnant is such a beautiful gift from God! And now you have the fun task of announcing your pregnancy to all your friends and family.  There are so many awesome, creative ways to announce your pregnancy, whether you announce it shortly after that positive pregnancy test, or wait until the first trimester is over, or even until you know the gender.  The great thing is, that there is really no wrong way to announce your pregnancy: people will be thrilled to hear about your newest addition whichever way you choose to do it.

One thing I would recommend, however, is to make sure you tell you immediate family and close friends you are expecting, before you publicly announce it on social media or mass email. You don’t want to slight your close family and friends – you want them in the loop before everyone else. They’ll love having to keep the secret, and be so excited to finally get to talk to everyone about it when you do finally announce you are expecting publicly. Generally, a simple phone call, lunch date, or even text may do the trick to keep these people in the loop. However, a picture of the positive pregnancy test could be fun to send to them as well (or several of the other ideas I’ll mention below).

For Christmas this year, my husband and I decided to subtly tell all the people we sent Christmas cards to that we were expecting baby #4, by signing our yearly newsletter as “Sincerely, Joshua, Katelyn, Lisa, Alison, Michael, and …. Fagan.” We felt like it was a sneaky way to announce we were expecting, without promising a baby in the next year in case I miscarried before the first trimester ended. It also rewarded our friends and family who took the time to read all the way to the end of our Christmas newsletter.

My sister once mailed close friends and families plastic pacifiers she picked up from a dollar stre, with a note announcing the due date of her pregnancy, and how far along she was. She then shortly thereafter made a public announcement.

There are lots of fun ways to tell your families, from gifting “Grandparent” merchandise to your parents and in-laws, or sending a Shutterfly Photo Book to your family. But, today, I really want to focus mostly on creative ways to publicly (i.e. on Facebook, Twitter, Instagram, Mass Emails, etc) share your exciting new addition. 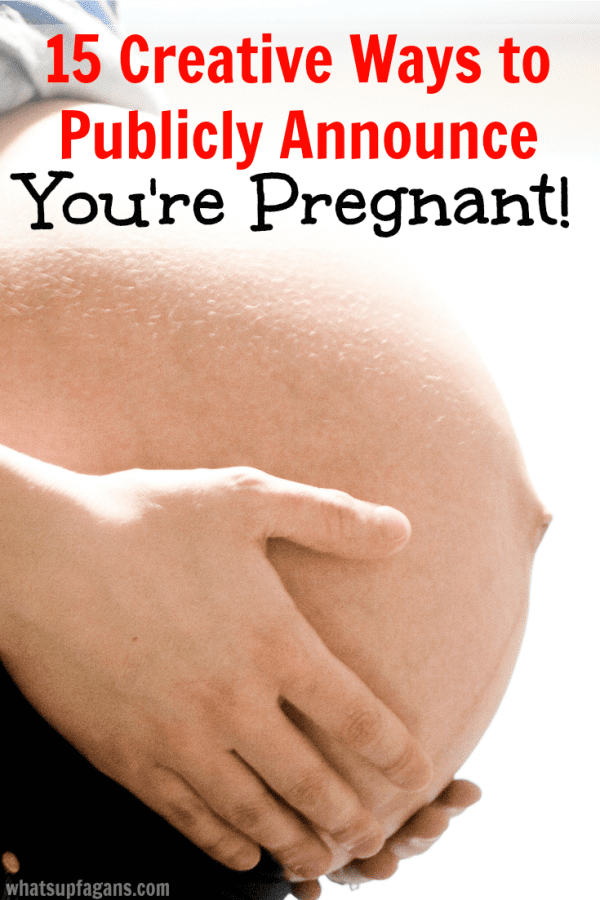 A few weeks ago I saw this adorable video pregnancy announcement show up in my newsfeed on Facebook! A couple, Kris & Kat, decided to pretend like they were about to take a picture with a group of their family and friends, only to be on record mode on their camera. After they counted down 1, 2, 3, the one holding the camera said, “Say, Kat’s pregnant!” Since they were filming, they got to capture all the raw initial emotions and feelings of their friends and family congratulating them! Not only is a cute way to announce your pregnancy, but a great memento from your pregnancy and family.

However, you can also send a video of you and your husband sharing the news, in some creative fashion (or not so creative).

2. Use the At-Home Positive Pregnancy Test

This is perhaps one of the most common and easiest ways to announce your pregnancy, as you likely aren’t showing much of a distinct pregnancy bump by the time you choose to announce. But, a plus sign on the pregnancy test acts as “proof” that you aren’t making it up (however, people can totally just grab a picture off Google Images – but don’t do that. Use your own. And don’t fake your pregnancy.). 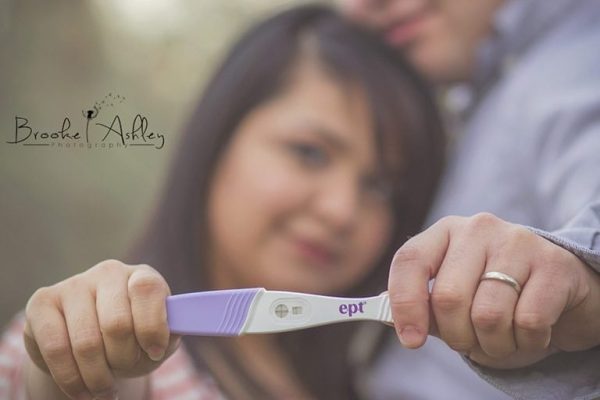 There are several different ways you can implement using the at-home pee stick in your announcement picture. Here’s some great ideas:

3. Use the Sonogram Picture(s)

Another very popular way of publicly announcing your pregnancy is by sharing your sonogram pictures!! Those grainy, blurry, black and white images, complete with your name at the top, attest to the fact that there is something in there! You can simply hold the pictures, hold it over your belly, have a child hold it, or simply just post the ultrasound picture on Facebook as your profile picture. It’s pretty obvious what it means! 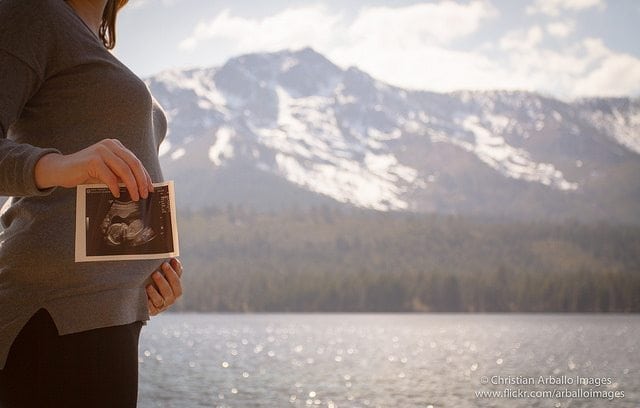 I am currently on baby #4, and have previously had twins, and a large, overdue baby. Needless to say, I am showing much earlier this pregnancy than most might be at 11 or 12 weeks. But, I took that to my advantage when two weeks ago I posted this picture and caption on Instagram and Facebook:

I made sure to wear my smallest top to the gym that day. And since I had previously shared photos, and talked about me working out, I thought it would be fun to announce it this way, as I felt it rather creative (even though I’m so not a gym rat).

This is a very popular trend when it comes to pregnancy announcements – using addition and equal signs to tell people you are expecting. This can also be fun if you are expecting multiples (twins, triplets, or more), as then people will have to do some quick math and be even more excited! My tips for doing the addition pictures, are to find a flat wall, like a barn, concrete or brick building face, and separate your family members along the wall, and then add in the plus sign, equal sign, and total number afterward in a simple photo editing program, like PicMonkey. That way you can center everything and size everything better as needed, and not be stressing about getting it perfectly lined up when you are snapping the picture. This will be especially helpful if dealing with small children in the picture as well. 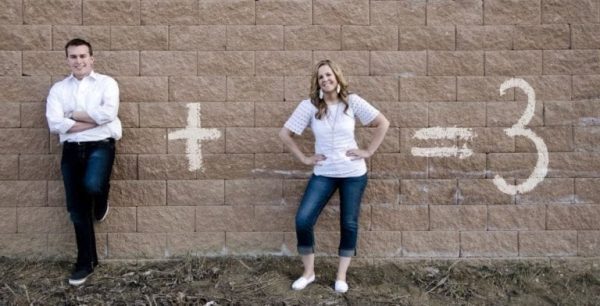 Simple, subtle, play on this classic phrase. Whether you don an entire outfit for Halloween to announce it then, or if you simply take a picture of a bun in your oven (literally here), it’s a cute way to tell others something is coming your way. 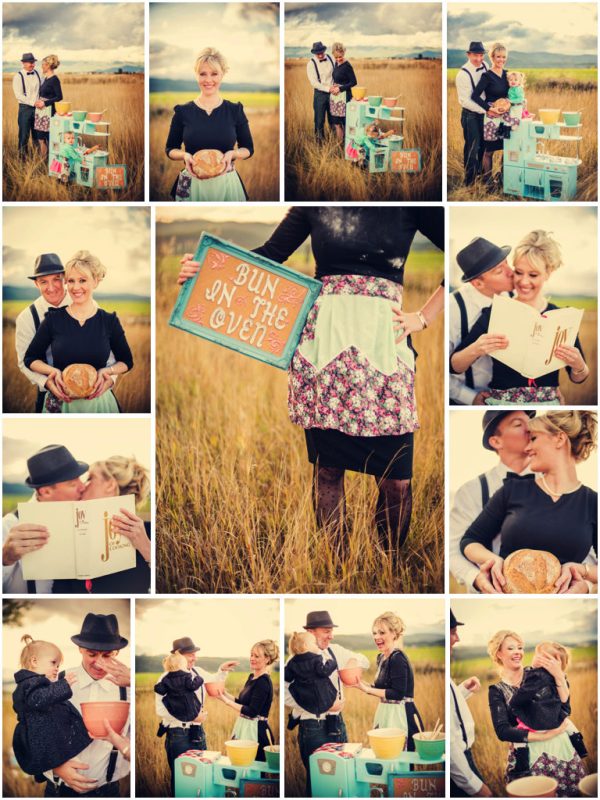 Chalkboards are all the rage nowadays! I guess retro is in. And man, chalkboard announcements are just so darn cute too, with their swirls, and typography, and simple color. Grab a small chalkboard, or make your own, and have it announce the pregnancy for you, whether in a single picture, or in some sort of triptych, or involving your other children, or props. This one was pretty cute announcing the arrival of TWINS! 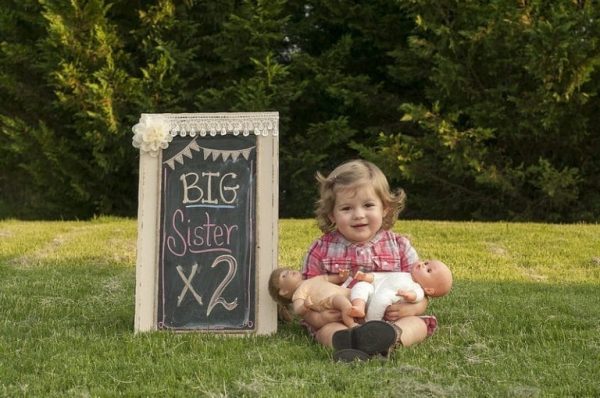 8. Involve the Older Children (and Signs and/or Numbers)

Sometimes it’s really fun to use your older children to announce your growing baby. The easiest way is by using something that says “Big Brother” or “Big Sister” or some derivative of those things, like “Only child set to expire on 04/22/15.” The child can have a sign that says this, a T-shirt, or something else. You can also have the children just holding up signs that can say whatever you would like, like I did with my twins announcing the that’s mom’s expecting another baby. You can just edit the blank papers (or basket like the last one below) in an editing program like PicMonkey, and have them say whatever you would like. 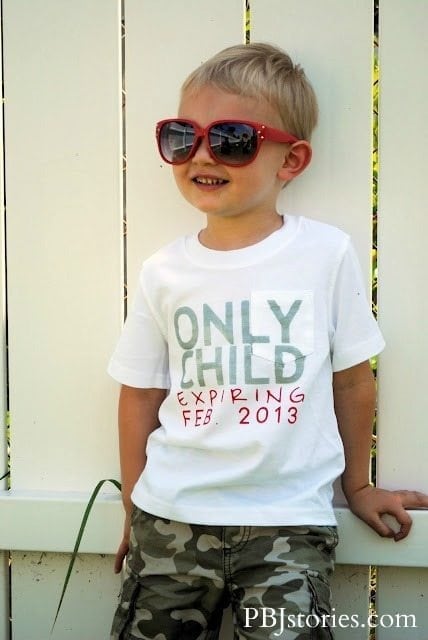 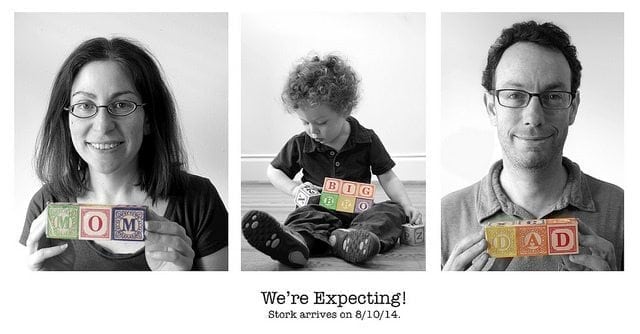 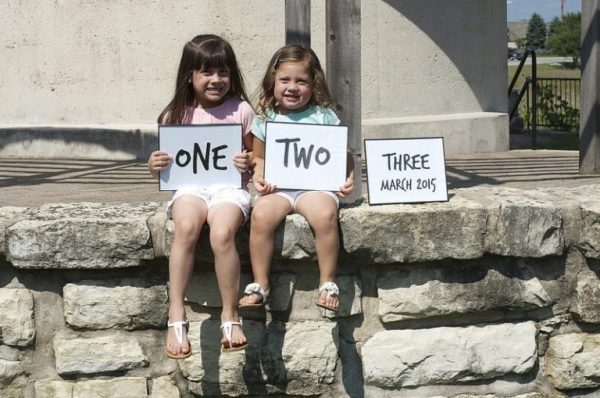 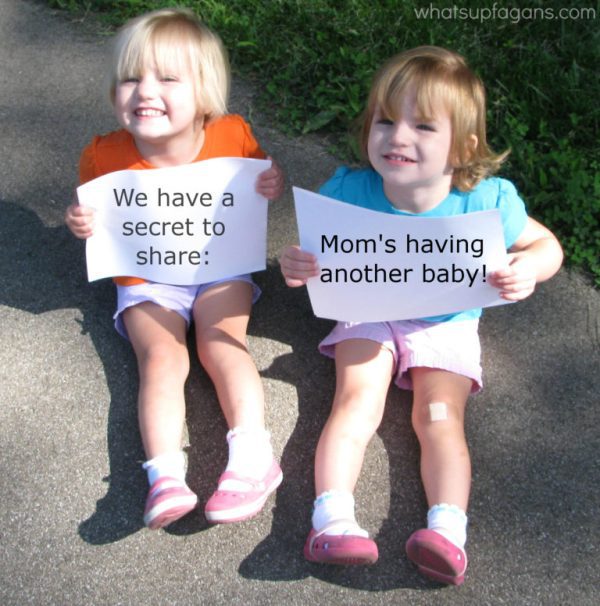 From The Train Driver’s Wife

You can get people guessing by using things like “Ice, Ice, Baby” and have your spouse holding two bags of ice, and you pointing to your belly. I can also imagine some baby dolls, Babe Ruths, Baby Bottle Pops, or other things that say “baby” along with some sort of other hint, just might be enough to announce your pregnancy creatively. 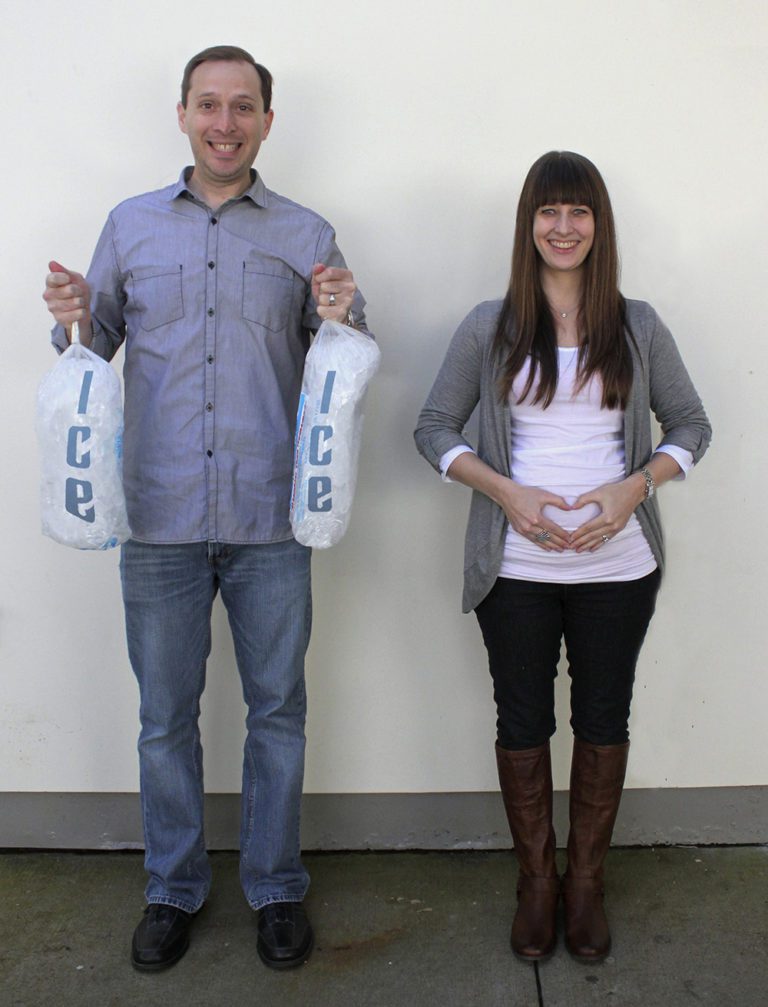 Sometimes adding a new addition means you will need a bigger vehicle. Maybe it means you’ll even be rocking one of those sweet 15-passenger vans. But, most likely, it might just mean a minivan or some other larger SUV or larger car. Arts and Crackers shared her good news in two different ways that involved her car. The first big announcement came with the following picture, and a picture of the inside, with the caption “There’s more room for car seats!” Of course this one takes a bit of planning ahead of time, and a new car. 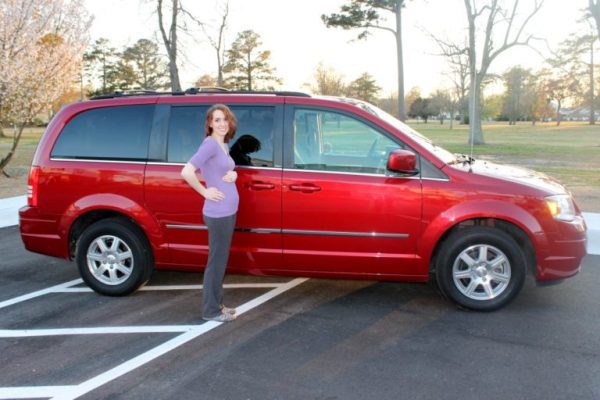 She also added a cute window decal on the back of her vehicle to announce the good news publicly to anyone who may end up driving behind her! 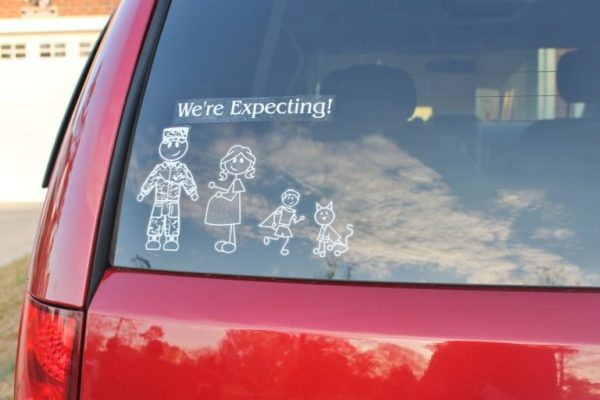 Another popular trend, is to take pictures of everyone’s feet! I have no idea where this trend started, other than perhaps to justify all the people out there who can’t get over the adorableness of tiny infant shoes! Basically, you line up you, your hubby, other children, and your newest addition’s shoes all in a line-up, with then maybe a due date at the bottom. This can be done to announce the gender as well. 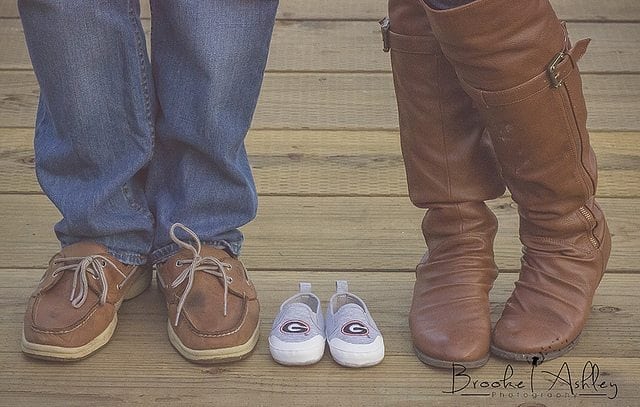 Some future dads-to-be have bigger bellies, and many think it can be fun to have both mom and dad lift up their shirts, showing off their bellies, and asking “Guess who’s pregnant?” or something similar. Some even write on their bellies, indicating that one is a baby (or hold the ultrasound photo over their bellies/shirts), while the guy may indicate that his is burgers, ice cream, or beer.  These belly pictures may also have a child in them, who’s belly may be referred to as juice, or cookies, or whatever. These can be pretty fun to take as well as share, and gets the guys involved in the action too. 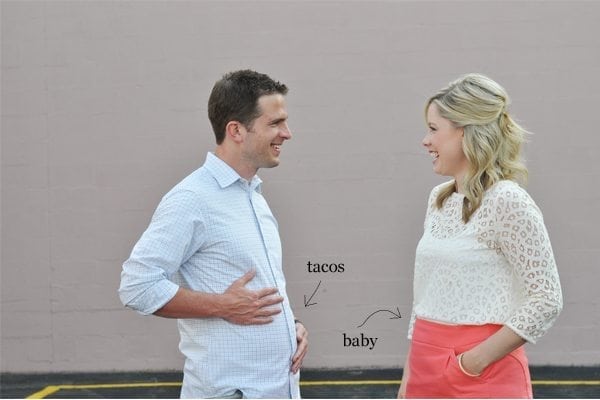 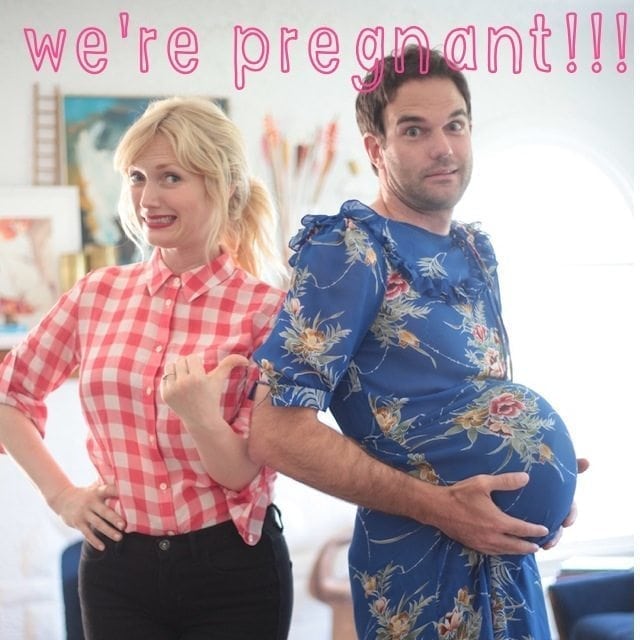 Posing with a “Bump Ahead” road sign is a fairly classic, yet adorable (and super easy) way to announce your pregnancy. Whether you print off your own sign, or really do find one near the side of the road, it’s pretty clear to guess what a bump ahead will mean for your family. 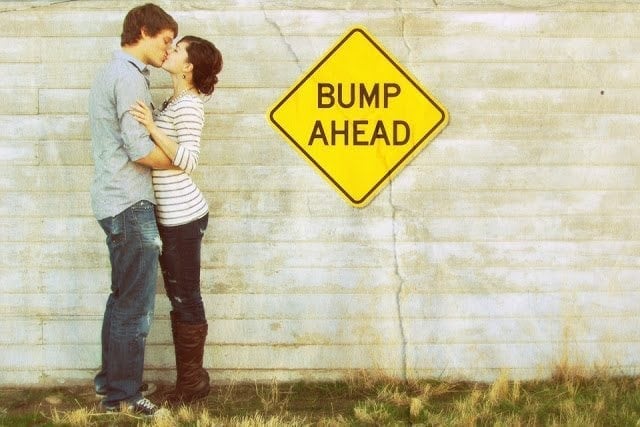 It’s a little cheesy, and it’s a little cute, but grab a simple jar of Prego pasta sauce from the store or your cupboard, and make a fun, easy, creative pregnancy announcement! 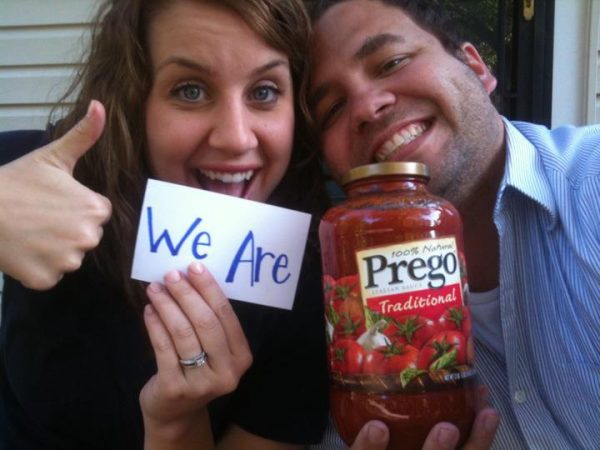 These eviction notices are a very cute pregnancy announcement trend that involves the older sibling who will shortly be getting evicted from his crib so that a new sibling can join the family (and use the crib). I think it’s pretty darn clever, and often very cute (especially ones I’ve seen with the child crying). 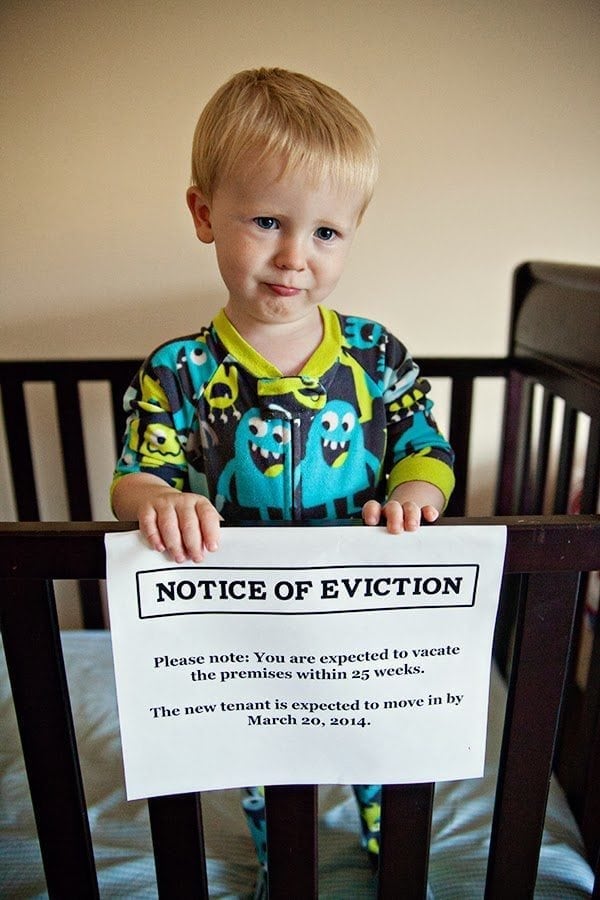 Sharing your pregnancy news is exciting and fun, and I hope these 15 ways of announcing your pregnancy have sparked some great ideas on how you may want to share with your friends and family. For more ideas, be sure to follow along my Creative Pregnancy Announcements board on Pinterest as I collect (and source) even more great ideas.

How did you tell people you were pregnant?