Get it now!!
Home » The Emotions of a “Surprise” Pregnancy: My Experience 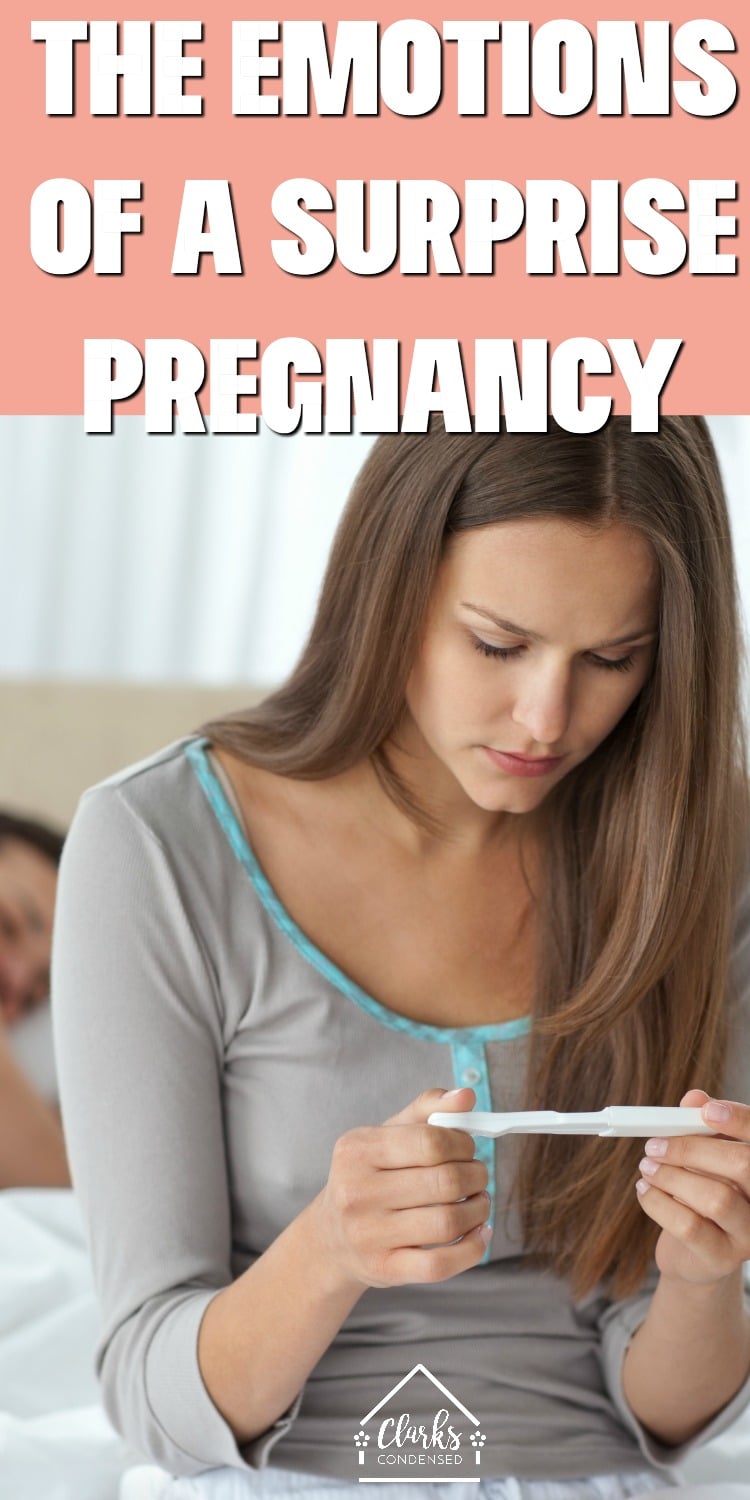 Finding out you are pregnant can be such a joyous and exciting time – but when it comes as a surprise, the emotions involved can feel a little more complex. Here is my experience with our surprise pregnancy.

I remember the day I found out I was pregnant with Jack very clearly.

It was the Fourth of July, and I told Forrest I thought I might be pregnant. He encouraged me to take a pregnancy test…so I did.

I didn’t even have to wait the requisite five minutes that everyone talks about – the moment I set that pregnancy test on the counter, it showed up with a positive sign.

Forrest took a video of me, and while I don’t feel like sharing that, I looked like I was in a total daze.

Which was probably pretty accurate to how I felt. I was not expecting to be pregnant, so it was quite a shock to me. I hadn’t had any early pregnancy signs, and since we weren’t trying to conceive, I wasn’t expecting it!

Later that day I went up to my sister’s house in Bountiful, where a lot of my family was. Forrest had to work (we were in college, and he was working as a lifeguard.)

I was still in shock, and I wasn’t ready to tell anyone! The whole time we were up there, everyone just thought I was sad that Forrest wasn’t there, and that I was a little dramatic.

Little did they know, I had just gotten the biggest news of my life!

A few times I almost told everyone – specifically when my brother-in-law joked about how I was probably pregnant (since my three sisters also were), and then when my mom jokingly said, “You better not have a baby in March sometime – I don’t think I could come out!” (because it’s right in the hardest part of my dad’s busiest work season!)

I just about burst into tears. Looking back, I wish I had told everyone right away – but we waited until I was about 11 weeks before telling anyone!

I always knew I wanted to be a mom. I was always that girl at school who wrote down “mom” as her future occupation.

I adored my nieces and nephews, and I knew that Forrest would be the best dad. In fact, when we first got married, we thought about having a baby right away.

However, we decided after a few months that we should wait until we were both closer to finishing school.

Well, God apparently had another plan in mind.

There are so many emotions that go along with a surprise pregnancy – and they are emotions I felt throughout my entire pregnancy.

I struggled with prenatal depression though I had happy moments that I look back on now. Everyone has a different story with their pregnancies, so here’s a little insight into how I felt during that ‘surprise’ pregnancy with Jack.

If you saw the video Forrest took of me, you could probably see the fear in my eyes.

I was only 21, and while I had plenty of nieces and nephews, I had no idea how to be a mom.

I was a newlywed, and while I loved that, there were plenty of adjustments that I was going through.

How was I supposed to become a mom to a totally helpless little child who would rely on me for everything?

I had fears of what kind of mother would I be – would I be enough? I knew that this child deserved all the love in the world, but I was afraid I didn’t have enough love.

I was even afraid that my baby wouldn’t love me! Forrest will tell you that my most often repeated phrase was this – I don’t think this baby is going to love me!

I was also nervous about how we could take care of this baby – we were both just working part-time jobs and going to school full-time.

Obviously, if it’s a surprise pregnancy, you weren’t exactly planning on it at that time. Shock is a common emotion after something unexpected happens.

I remember just feeling in a complete daze for several weeks – like I didn’t have much control over myself or what was going on. It just didn’t seem real. Even when I started throwing up every day, it still just felt like it wasn’t real.

I also experienced panic. There were several times that I woke up in the middle of the night and had a full-on panic attack. Those were some of the scariest things I think I experienced during pregnancy – it felt like an out of body experience.

I’d be lying if I said I didn’t feel any excitement or joy.

When I thought about how fun it would be for my child to have three cousins almost the same age, I was excited for him.

The first time I felt little flutters from Jack in the middle of the night, it brought me great joy.

And when we saw him on the ultrasound to determine if he was a boy or a girl…oh, I cried tears of joy.

I remember one specific moment in the latter end of my pregnancy when I was just overwhelmed with excitement and joy for this sweet spirit that was growing inside of me.

I know many people that struggle with infertility, or have never had the opportunity to have children for one reason or another.

I can’t even imagine the pain of experiencing that, and even though the pregnancy wasn’t a surprise, I did feel grateful that I was able to get pregnant with my son easily.

I have had other trials in my life, but I have been grateful that having children hasn’t proven to be one of those thus far.

On the flipside, I felt guilty that I was able to get pregnant so easy, without even trying, when so many spend years and thousands and thousands of dollars to conceive.

It made me feel awkward telling people I was pregnant, especially since it wasn’t necessarily something I wanted at that point.

I remember one time when I went to a prenatal appointment, I started talking to a nurse and just burst into tears. I told her that I felt guilty that I was pregnant because I knew people who would give anything to “accidentally” get pregnant, and I felt like I didn’t deserve to be pregnant.

That nurse was an angel and just sat there with me for 20 minutes as I cried about different things, and she told me that even though others struggle to get pregnant, that doesn’t mean I need to feel guilty that getting pregnant was easy for me.

I think the biggest lie I told myself was that not only no one would understand what I was going through, but they didn’t care.

I figured everyone just would think I was a big baby or dumb for being so freaked out about becoming a parent – especially because it was a surprise.

I didn’t want people to be mad that I wasn’t beaming and on cloud nine about it. I felt like no one knew what it felt like to be me – a young, pregnant college student (who was pretty poor).

The thing I realized was this – even if I didn’t feel like anyone would want to hear how I was feeling, it wasn’t true. I had a loving husband

For me, a surprise pregnancy wasn’t the end of the world. In fact, having Jack was one of the best-unplanned things that have ever happened to me. I

am grateful that when I got pregnant, even though it wasn’t a part of my immediate plans, I was able to get proper medical care, he was healthy,

I had a supportive husband, and we were able to provide for him – even if we lived in humble circumstances for awhile.

I know that this isn’t always the case, but even if you have different circumstances than me, I hope that if you have suddenly found yourself pregnant, this post can help you realize it’s okay to have a wide range of emotions about it!

I’ve realized that babies come on their schedule, and it’s worth it to roll with the punches. There’s nothing better than being a parent!

I came to update this post today, and I thought I would share a bit about my experience from the last seven years.

That little “surprise” baby has been one of the greatest blessings in my life. I often say that the world needed Jack when he came, and it’s a better place with him in it.

Even though that pregnancy was hard, and I really struggled emotionally when things didn’t go as planned – it’s been far greater than I imagined.

I’ve had another son – Oliver – who I love dearly, and I am currently 8 months pregnant with our third little boy. We actually struggled with secondary infertility due to Endometriosis, so I experienced the flipside of things further down the road.

So I just want to encourage anyone who might be struggling to be excited about a surprise pregnancy – yes, it’s hard. It’s okay to be frustrated, or sad, or any number of emotions.