Failure to thrive is not a fun diagnosis. 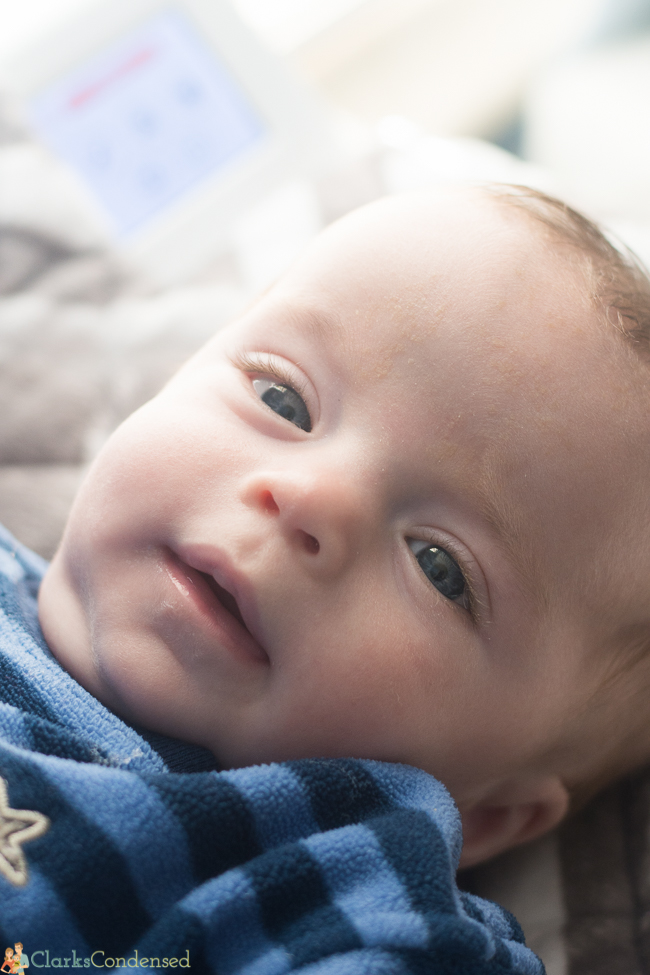 {{The latest version of the Hatch Baby Scale is available for presale for $129 – way less than the first edition – even with the old coupon. Pre-order it here}}

When Oliver was diagnosed as failure to thrive at two weeks, I felt like I had “failure to parent” stamped on my head. Not only was I still trying to deal with the fact that my placenta had failed him, but nourishing on the outside was proving to be difficult, too.

Even though I know I didn’t do anything wrong, and Oliver just needed a little help growing, it was a very difficult time.

In his short four months, we’ve gone through a lot trying to make sure he keeps gaining weight at the pace he should. For awhile, it felt like every time we progressed, something would happen to set him back. Mastitis, lip tie, getting sick a few times, throwing up four times every time he ate, a weird diagnosis of gallstones and sludge, a pediatrician we didn’t see eye to eye with,  etc. There were a few times I honestly wondered if he would ever get past it.

He was (and is) so perfect. Even with his issues, he’s been nothing but pleasant and sweet. Just slow growing. I think his sweet spirit has brought peace to me through it all. It seems like since about a month before he was born, we’ve been constantly worried about him. An IUGR diagnosis and a Failure to Thrive diagnosis is a little much to swallow (he’s tiny but mighty though, we have definitely found.)

Thankfully, he seems to have finally rounded a corner over the past month, and he’s putting on the weight he should. We’ve got him on a medication to get his reflux under control, he is breastfeeding like a champ now, and he’s gained four pounds in two months.

But still, I can’t help but worry about his weight gain constantly. It seemed like on the days we monitored his weight more closely, he gained, but as soon as we stopped, he stopped gaining, too. Our scale wasn’t the best, so I wasn’t ever quite sure of what he weighed. I had some serious issues with our pediatrician, so I didn’t want to go by the office every other day to have him weighed just to calm my mind.

I saw on Facebook an ad for a product called the Hatch Baby Smart Changing Pad several months ago – right in the midst of Oliver’s weight problems. I was instantly intrigued. It’s a changing pad that doubles as a baby scale, and it had all sorts of other neat features. It was only in pre-sales when I saw it, so I just stored that information in the back of my head.

Well, as fate would have it, Hatch Baby 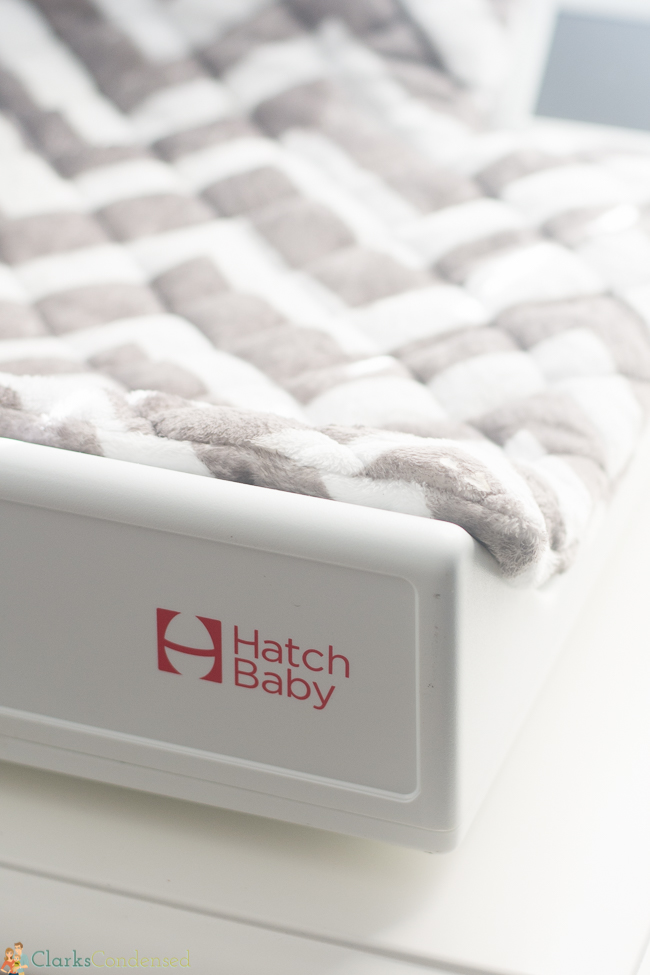 reached out to me a few weeks later and asked if I would work with them! Of course, I was THRILLED, and I said yes. We were sent our own smart changing pad a few weeks later, and we’ve been using it since November. 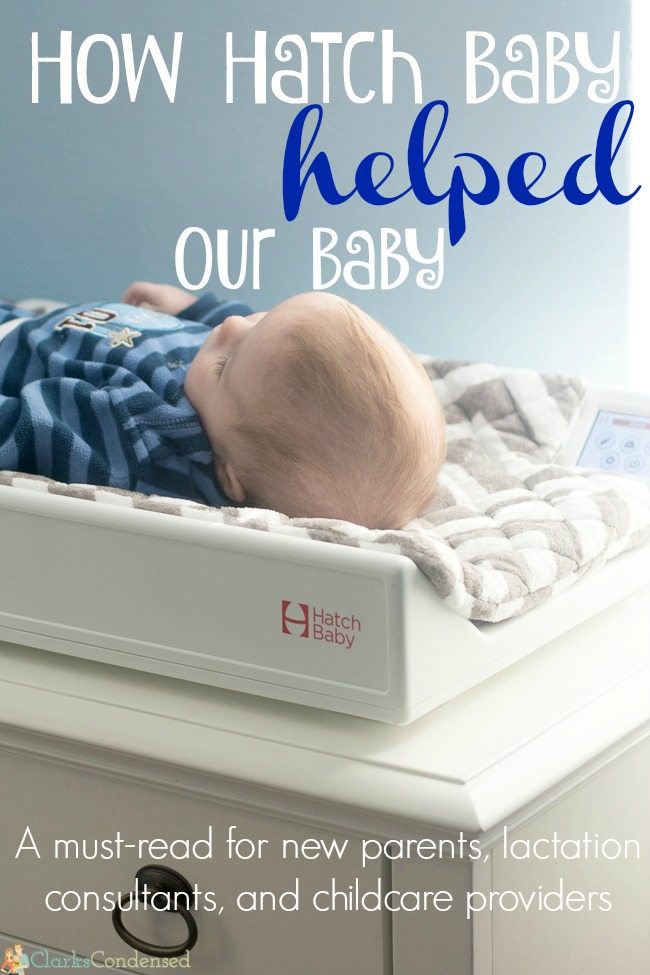 This is really one of my favorite products. You all know how much I love the Owlet Baby Care Monitor, and my feelings are the same toward this product. It gives me peace of mind to be able to not only monitor his weight but also do accurate weighted feeds to make sure he’s eating enough. Here are some of the features (or you can watch the video if you prefer!) 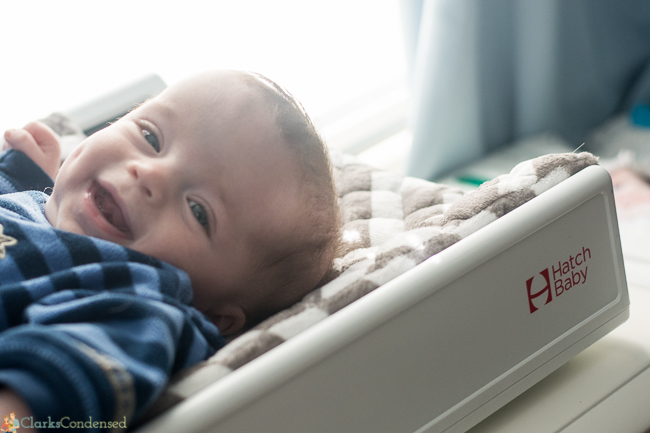 There are a lot of great features that really sets this apart from other scales. Here are a few of my favorite:

This is what appealed to me most about the Hatch Baby changing pad and scale. If you don’t know what a weighted feed is, it’s a technique used to monitor a breastfed baby’s intake. Lactation consultants often do this to see if a baby is transferring enough milk.

With our last scale, it only showed ounces and half ounces, and it was always a shaky reading at best. With the Hatch Baby scale, it carefully measures the baby’s weight before AND after the feed. Then, it sends an accurate reading of how many ounces the baby took in. 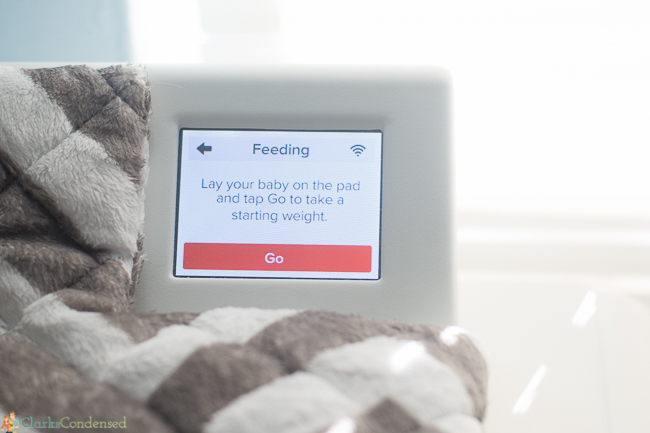 For us, this is a game changer. Oliver has been primarily breastfed (with some supplemental pumped breastmilk feedings.) When you don’t have ounces to go off of, it can be a bit nervewracking. With Jack, I never even thought about it. With Oliver? I think about it all the time.

I loved being able to see how much he got, and if he didn’t get enough, I would offer him a little bit of pumped milk. My lactation consultant recommended giving him “double cream” milk (basically, you just skim the fattiest part of the breastmilk out of the bottom), so I would usually give him those portions when his intake wasn’t as good. It also helped me to figure out his eating patterns a little bit more. He ate the most in the morning and the least in the afternoon.

I LOVE the accompanying mobile app. It’s jam packed with features. I actually used it before the scale even arrived. It tracks the baby’s weight – of course – but also keeps track of how much they ate (and showed an average oz per feeding), can keep track of how long a baby ate and when they last ate, as well as their diapers. With the scale, you can press buttons to keep track of how many wet and dirty diapers a baby had.

Everything that you do on the scale is automatically synced with your phone once it is done. This has been nice because I’m not very good at remembering exact ounces or when Oliver ate last. When I do a weighted feed, it automatically tracks when he start and finished eating.

Something I particularly like is the growth charts. Each time I weigh him, it plots it on a scale (based on WHO standards.) It’s so great to be able to monitor his curve to make sure it keeps going up. This is honestly one of my favorite features!

The changing pad is super soft, and it’s easily washable. Oliver doesn’t mind me putting him on it. With our other scale, even when I put a blanket on it first, it was SO hard, and he would wiggle and cry every time I weighed him. Obviously , a wiggly baby is hard to weigh. I like that I can weigh him, change him, and keep him happy all at the same time!

Especially in the early newborn days, it’s important to watch your babies diapers. They need a certain amount of diapers to be considered hydrated and nourished, and I don’t know about you, but I’m so bad at keeping track. With the Hatch Baby, every time you go to change your baby, all you have to do is press a button on the scale and tell it that your baby had a wet, dirty, or combo diaper.

One thing I wish it had was the ability to weigh the diaper at this time. You can do this manually, and I have, but it would be nice to be able to have the amount of ounces in each diaper recorded as well.

Because everything is synced from the scale to the app, you can easily have this data shared with anyone! You can have dad and moms apps synced with the scale. It’s great if you aren’t home and someone is watching the baby and you want to know how they are doing.

I will say this – you can easily get obsessed with weighing your baby. I had to scale back how often I checked how much he was eating once he was gaining more consistently, because it sometimes stressed me out. With everything, moderation is key. I just weigh him in the morning and at night now, just to make sure he’s on track to gain weight for the next day. It’s interesting – I’ve realized he weighs about 2-3 ounces more in the morning than he does in the evening. 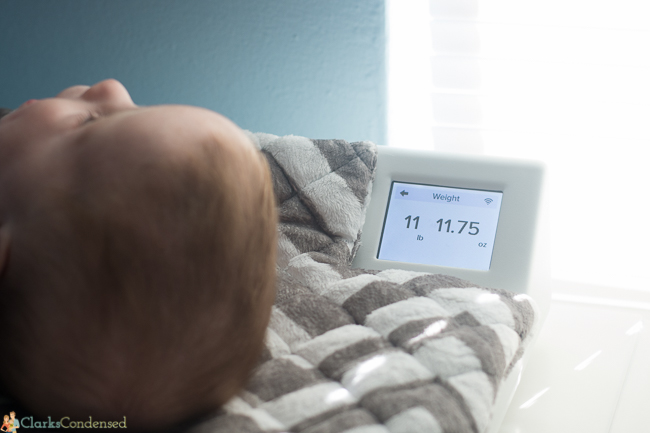 Who Should Buy Hatch Baby?

Well, I think any parent could appreciate the Hatch Baby Smart Changing Pad. Even if your child is growing well and you have no cause for concern, that extra dose of reassurance can be, well, reassuring!

However, there are a few different people who I think would particularly benefit from buying a Hatch Baby scale.

This is the hard part. It does cost a decent amount of money. It is currently on sale until January 17th for $199, but it will go up to $299 after that. However, if you purchase it now, you can get $20 off using the code CLARKS20.

I know that’s not a price that is in everyone’s budget, but I do think if you are concerned about your baby’s weight, it is worth it. It makes tracking things so much easier, and I love that we were able to make sure he was getting enough to eat and gaining weight consistently. It fits great in our nursery on top of Oliver’s dresser, and we will use it for other babies, too, I’m sure!

Thank you to Hatch Baby for providing me with a scale to review. All opinions are 100% my own.