Well, last night Jack got his second hair cut. If you’ve been reading Clarks Condensed for awhile, you may remember this post all about his first hair cut, and tips for cutting a baby boy’s hair. That was just about two months ago, and he seems to have inherited his mommy and daddy’s trait of having the fastest growing hair ever. He unfortunately needed a haircut really bad once again, and I finally gave in yesterday. Unlike last time, I actually cut off a ton of it this time, and the difference is huge. It made me so sad (seriously, I was on the verge of tears all night) because he looks like a little toddler now, rather than a baby. 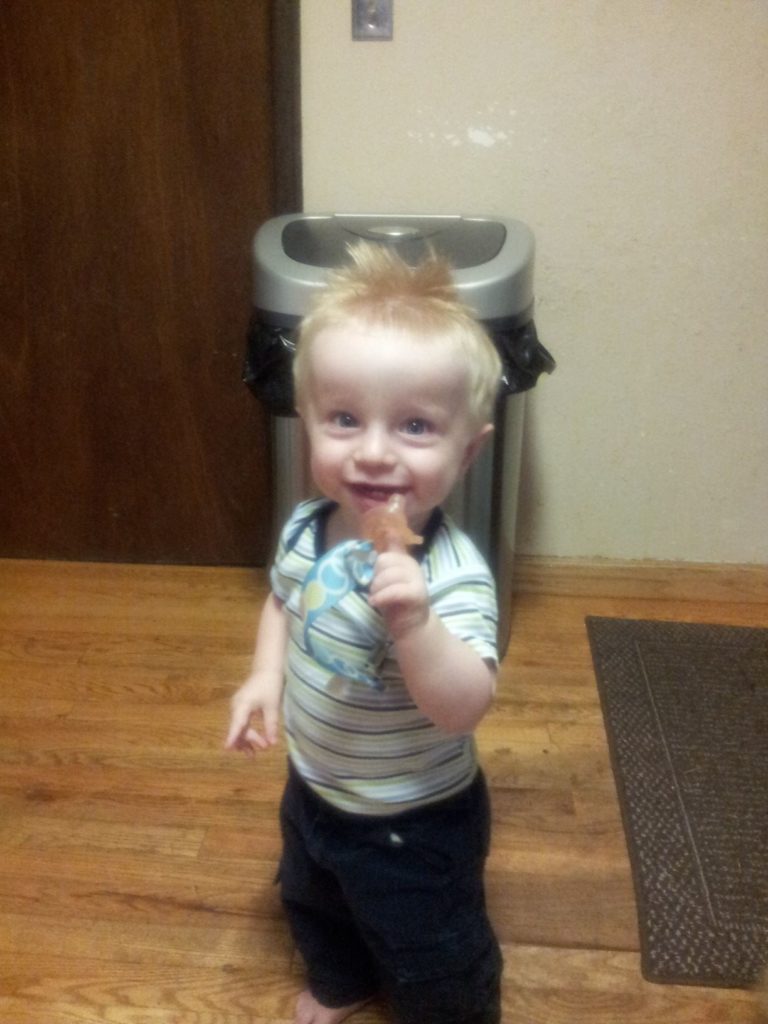 I think it turned out well, and I think he’s happy he no longer has hair in his face! And his hair seems to be doing what it used to when he was a younger — stick up on it’s own!

Anyways, I just wanted to share that because I think he’s so cute. Today, I wanted to talk about summer sun safety for kids, especially for younger ones. 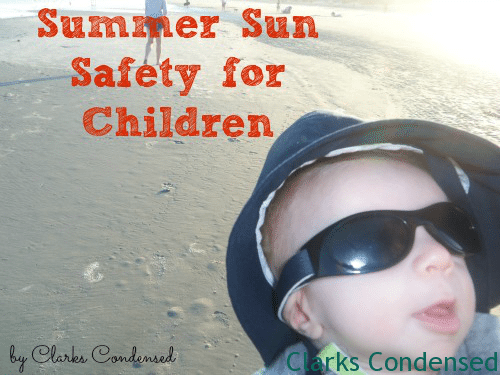 Did you know that if a child gets one sunburn that results in blisters during their childhood, it will more than double their chance of developing melanoma at some point in their life? And that if a person gets five or more sunburns at any age, it doubles their risk as well?

If that doesn’t convince you to want to keep your kids safe in the sun, I don’t know what else will! I think I’m pretty much doomed, because I have had a lot of really bad sunburns, especially when I was younger. When we went to Hawaii when I was 8, our sunscreen failed to work, and I spent that week hardly wanting to move and developed terrible blisters. Another time, I got a really bad sunburn while skiing, that also resulted in not only blisters, but my whole face swelling up. Needless to say, these were very uncomfortable experiences, and have made me determined to protect Jack in the sun as much as possible.

Obviously, if you are going swimming, most people will remember to put on sunscreen

There are a lot of sunscreens out there, but here are a few of the things that any sunscreen you put on your child (or even yourself) should have:

Tanning oils really aren’t effective, and are just asking for a sunburn (and a bad one, at that.) Spray sunscreen is popular for children, because they are easier than slathering it on, but if inhaled, can be very harmful. Stick sunscreen is great for children’s faces, and lessens the likelihood that of getting it in your child’s eye. Which, believe me, is not fun.

SPF 30 or higher, Broad Spectrum (meaning it covers both UVA and UVB sun rays) and is water resistant.  Don’t be fooled by sunscreens claiming to be much over SPF 30, because they really don’t do that much better of a job, and the FDA doesn’t actually regulate sunscreens with an SPF higher than 50Tanning oil should be avaoild. Sprays can be accidentally inhaled, especially by younger children.

There’s a lot of debate about the ingredients of the most popular sunscreens (but really, what isn’t there a debate about nowadays?!) I did find this post to very informative about which ingredients should be avoided (and why) and links to some of the better kinds to buy. In fact, I think I will be buying this sunscreen from the Honest Companyn

Just dabbing on a little bit of sunscreen won’t really do much. Slather it on liberally. It’s better to have too much than too little. It should be applied about 30 minutes before exposure to the sun, and after that, should be re-applied at least every two hours. If your child has been sweating a lot or swimming, apply it even more often.

Make sure to put it everywhere, even if you don’t feel like that part of the body will get burnt. I always get a sunburn on the part in my hair, and it is so painful! Even though it might get a little greasy putting it there, it’s worth it. Don’t forget the fact, back of the neck, legs, and arms. If the sun sees it, it can be burnt!

For infants, you should actually not put sunscreen on them if they are under 6 months. Instead, it’s better to just keep them out of direct sunlight. The FDA says this is because infant’s skin is a lot thinner than an adult and will absorb more of the chemicals in the sunscreen, and they are also more likely to have a reaction to it. If you cannot avoid the sun at all for some reason, just apply a small amount, and test on the back of your baby’s arm to see if they react.

Wearing appropriate clothing in the sun can help a lot with protection. We always put a rash guard on Jack, which has been pre-treated to have be UPF 30. Not only does it help protect him from the sun, it always helps him not get as cold as he might otherwise get while swimming. 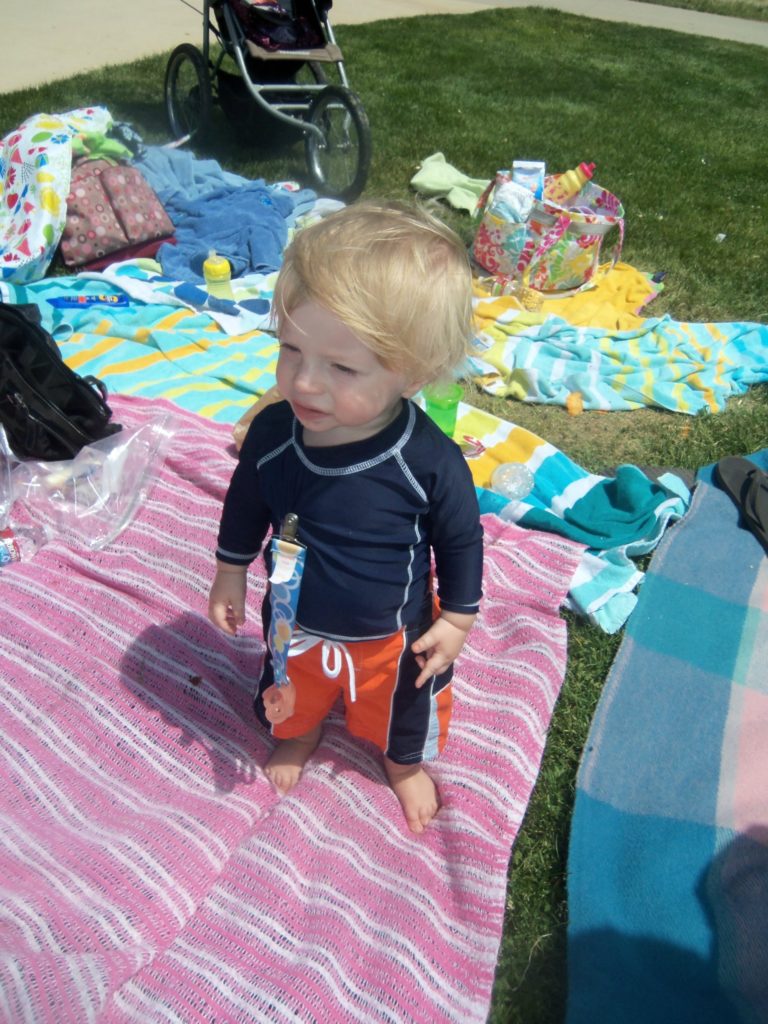 Other essential sun gear are hats and sunglasses. My favorite hat that we bough Jack is this one from Target. He wore it when we went to South Carolina last summer, and it really protected from the sun, and kept it out of his eyes. We also got him some adorable baby sunglasses

. Because he was (and still is) young and probably wouldn’t be very good at keeping the sunglasses on, I loved having the adjustable strap. And, even though his head has grown considerably since then, I can still use them this summer. Didn’t he look so cute? 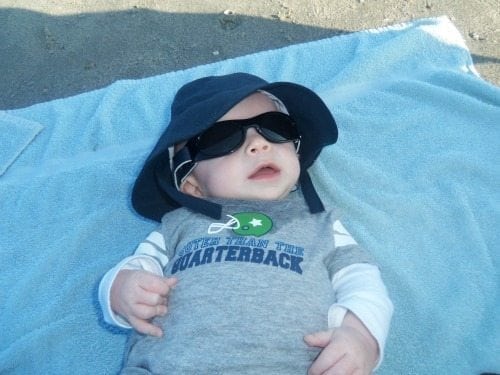 Even though dark clothes may attract heat, they are much better for preventing sunburns. If a shirt is see-through at all, a person can still get sunburned. One thing you can do to make your clothing be UPF 30 is purchasing a laundry additive called Rit Dye SunGuard

. Using this while washing your clothes will make your clothing UPF 30 for up to 20 loads of laundry. If you spend a lot of time outside, it might be worth investing in.

This might be a hard one, but it’s best to avoid being outside for prolonged period of times during 10 AM and 4 PM. I know, that’s probably prime playing time, but it is also when the sun is strongest. Even if it’s cloudy, the UV rays are still strong, and in the shade, the sun can be reflected, which can still burn you! Being out during this time, it is ab

10 AM and 4 PM is when the sun is the strongest. Even if it’s cloudy, the UV rays are still strong and your child can still burn. That happened to be when I was skiing, as I mentioned earlier, and it was terrible. If they are outside, it is absolutely necessary to put sunscreen on during this time, and limit the time outside as much as possible. And if there’s no natural shade, be sure to have an umbrella! When we went to the beach last year, I think Jack spent most of his time under an umbrella, in this car seat, with the shade covering him. Sure, it wasn’t super fun, but at least he was safe!

Don’t beat yourself up. It happens. Your child will likely be uncomfortable, but there are a few things you can do. First, you could apply aloe vera, which helps cool and heal the burn. If you don’t have that, putting a wet cloth on their child’s skin will help as well. To help with the pain, give an age appropriate dose of tylenol or advil as needed.

Try and avoid the sun for a little while if possible, while the burn heals. There’s nothing worse than getting a burn on top of another burn, which will also increase the chance of blistering.

Where Would We Be Without Good Fathers?
Next Post: Almond Joy Coconut Macaroons