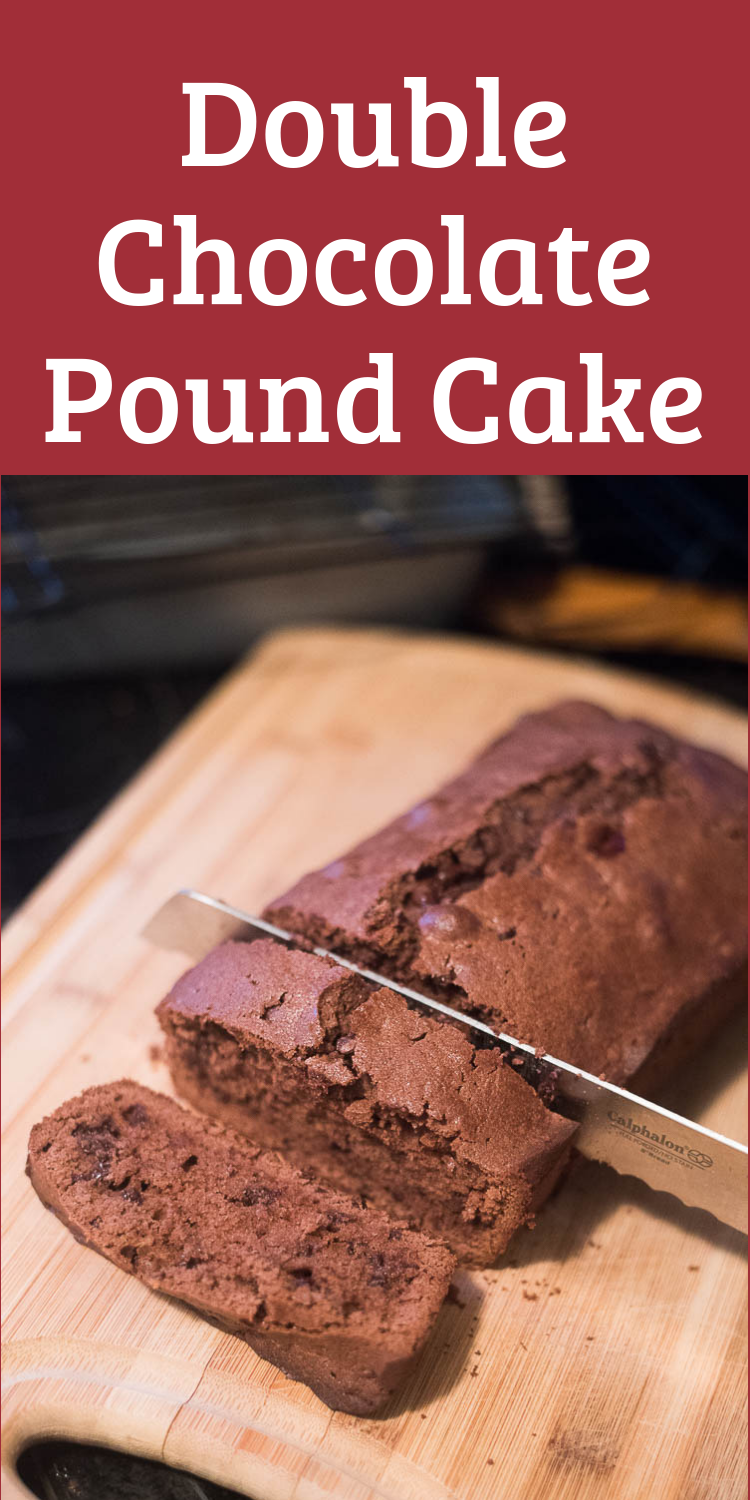 This is a sponsored conversation written by me on behalf of Maurice Sendak Foundation. The opinions and text are all mine.

Over the past few years, I feel like I’ve learned a lot about friendship.

The type of friend I want to be.

How to make friends…and the value of having a true friend.

You see, making friends has never been something I’ve been really good at. I love having friends, but I tend to be really self-conscious around new people (especially when they seem intimidating).

But like anyone, I do love having friends – and I really cherish the good friends I’ve made over the years.

I often tell my son it’s not the quantity of the friends you have but the quality…and I try to instill the importance of being a good friend himself.

This last year, I was feeling rather down – many of my good friends don’t live nearby, and I wished that I had people I was closer to. But rather than sitting in a pile of pity, I told myself that instead of waiting for a good friend to come along, I should become the type of friend I wish I had.

And while I’m not saying I’m the best friend you could ever have – I have found making friendships just a little bit easier.

I’ve also discovered how important familial relationships are – my family are amongst my closest friends, and I’m so grateful for that! I love watching the budding friendship between Jack and Oliver. Even though they are 3.5 years apart, just in the last six months or so, they’ve become such sweet little buddies.

Of course, they fight a lot. But they also play a lot and truly seem to enjoy being around each other. Oliver asks me no less than 10 times a day when Jack will be coming home from school. 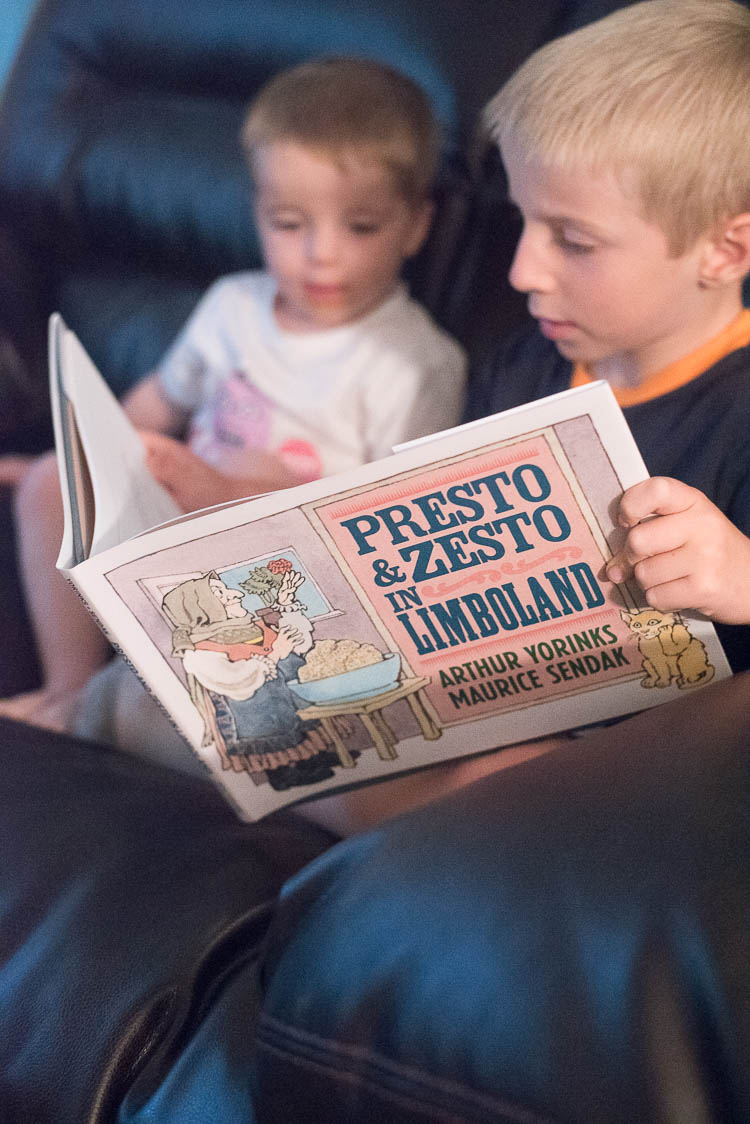 Now, you might be wondering why I’m talking about friendship randomly – especially in a post that is supposed to be a chocolate pound cake (which is delicious, and you’ll definitely get to the recipe soon!).

It’s because of a new book that was just released – and it’s all about a pretty special friendship between Maurice Sendak and Arthur Yorinks.

This book was discovered years after the passing of the beloved children’s book author – Maurice Sendak – and HarperCollins publishing company just released it a few days ago. 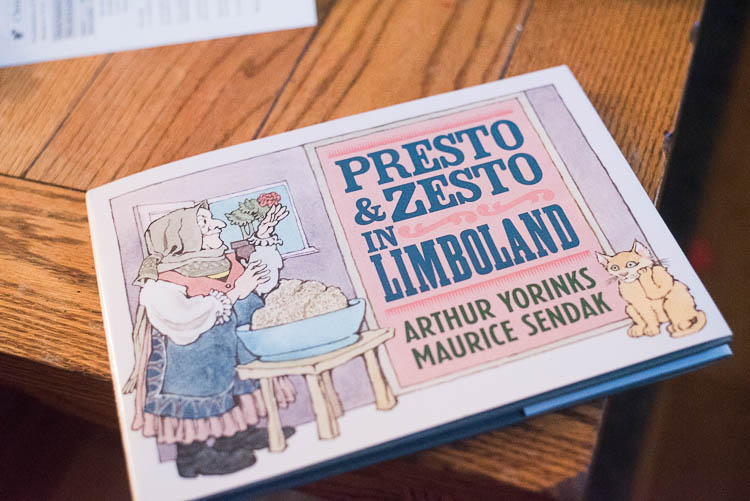 The illustrations were made in 1990 to accompany a London Symphony Ochestra performance, and it’s such a fun book. I love that it was written by best friends, and that it celebrates a lifelong friendship.

I feel like it shows how friendships can get you through some crazy and often mixed up times – Presto and Zesto (the nicknames Maurice and Arthur had for each other),

In the book, Presto and Zesto enjoy a delicious chocolate together – which seems like a good thing for any set of friends to do. So in honor of the book, I decided to make a chocolate pound cake. 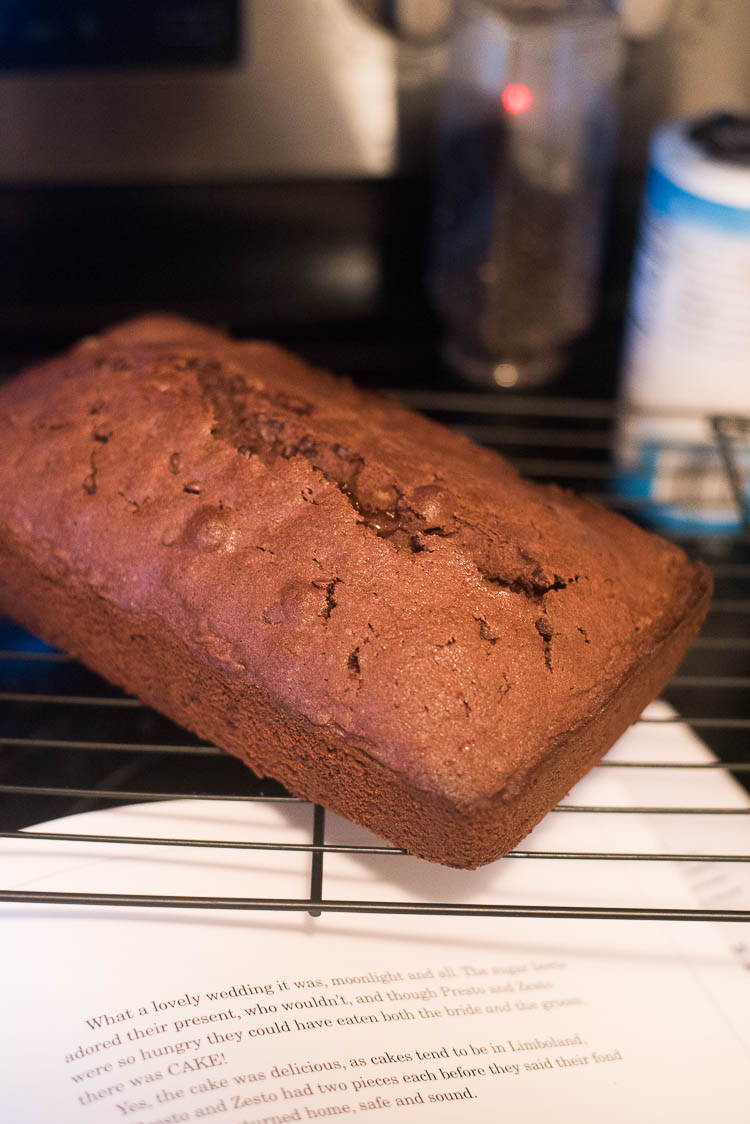 I love making food for friends and family. Whether they just had a baby or surgery, are having a birthday, or I just think they need some cheering up, I always turn to food…especially baked goods.

We shared this recipe with my mom one evening, and it was so fun to just sit back and enjoy the food while we visited.

I already have the most amazing, moist chocolate cake recipe ever on our blog, so in an attempt to not reinvent the wheel, I decided to make a fun twist on the classic pound cake.

I thought it would be a fun homage to Presto and Zesto – and the Maurice Sendak Foundation as a whole as they celebrate the release of this book. Because really, what better way to celebrate than with CAKE?!

You can pick up a copy of Presto & Zesto in Limboland on Amazon!

How Pound Cake Got Its Name 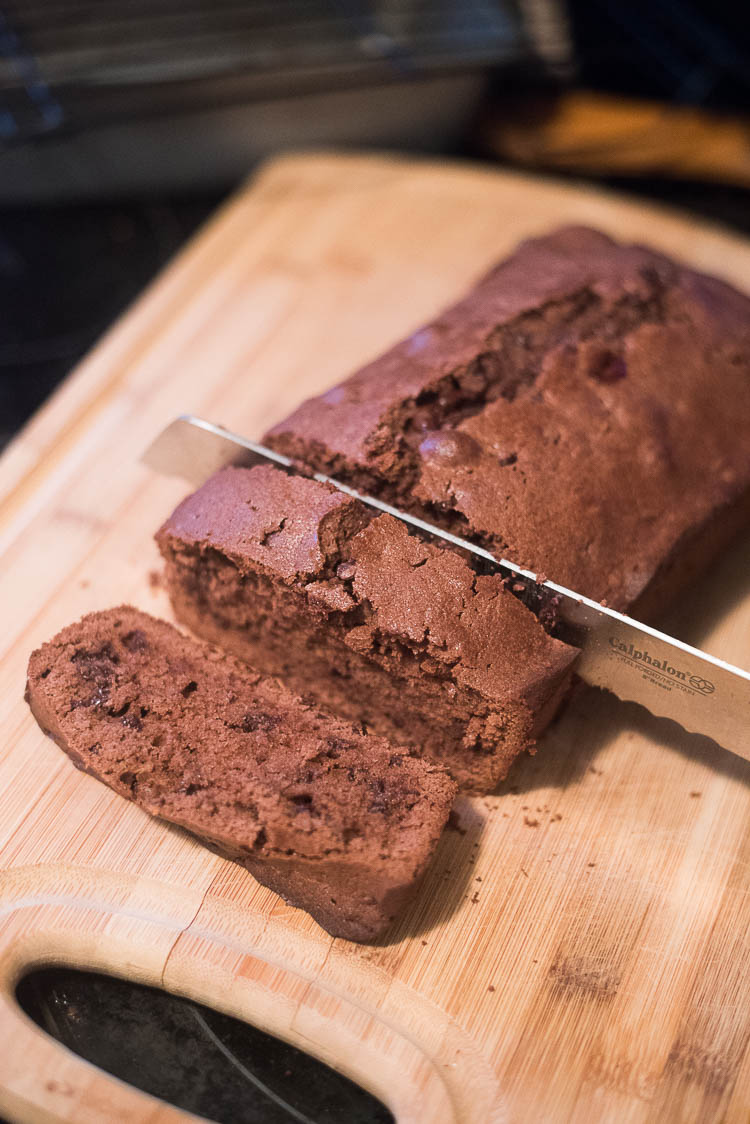 Pound cake originated during the mid-18th century in Europe. Originally, the recipe ended up being four pounds, and it would have one pound of all the ingredients.

It was (is!) a rich dessert, so the thought was to bake something so rich and decadent that you only had to serve a small portion so you could save the rest for later.

Most recipes these days don’t follow this exactly. In fact, as I was searching for a pound cake recipe to use as a base for this recipe, it seemed like all of them had different measurements. In the end, I did go with a pound of each item – though I adjusted the flour to be a little bit less for a more fluffy cake.

In this recipe, I obviously mixed things up (pun intended) a little bit by including cocoa powder and mini chocolate chips. It turned out AMAZING! 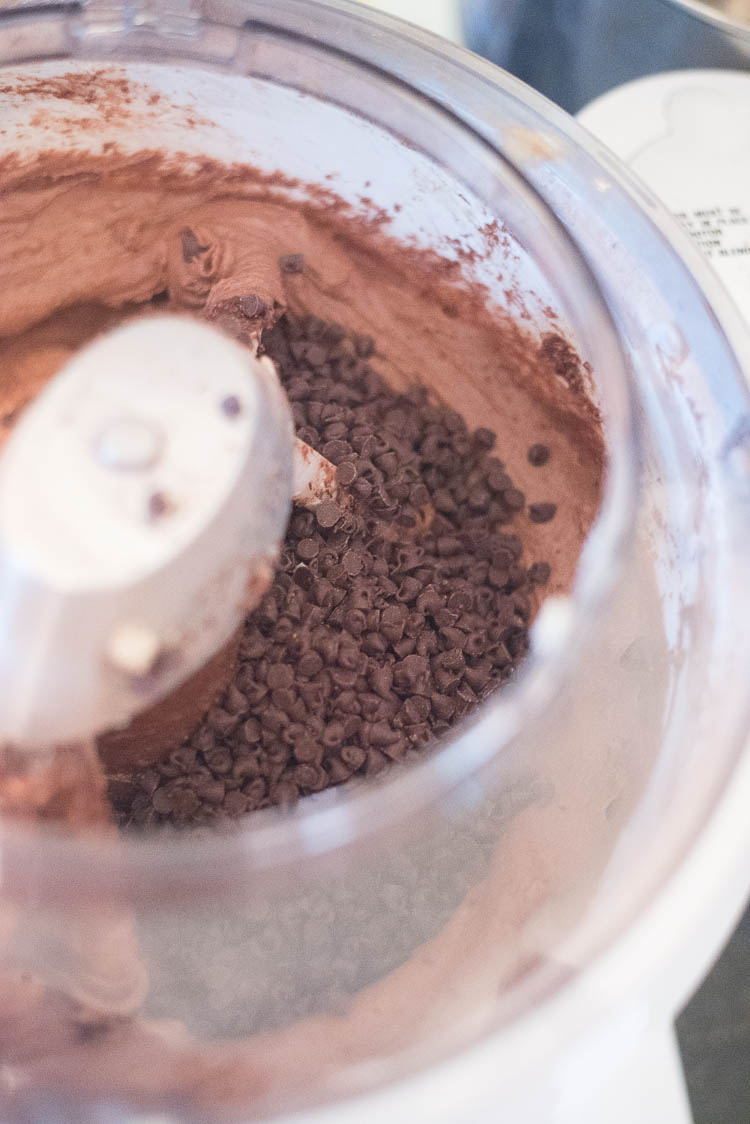 What to Serve with Pound Cake 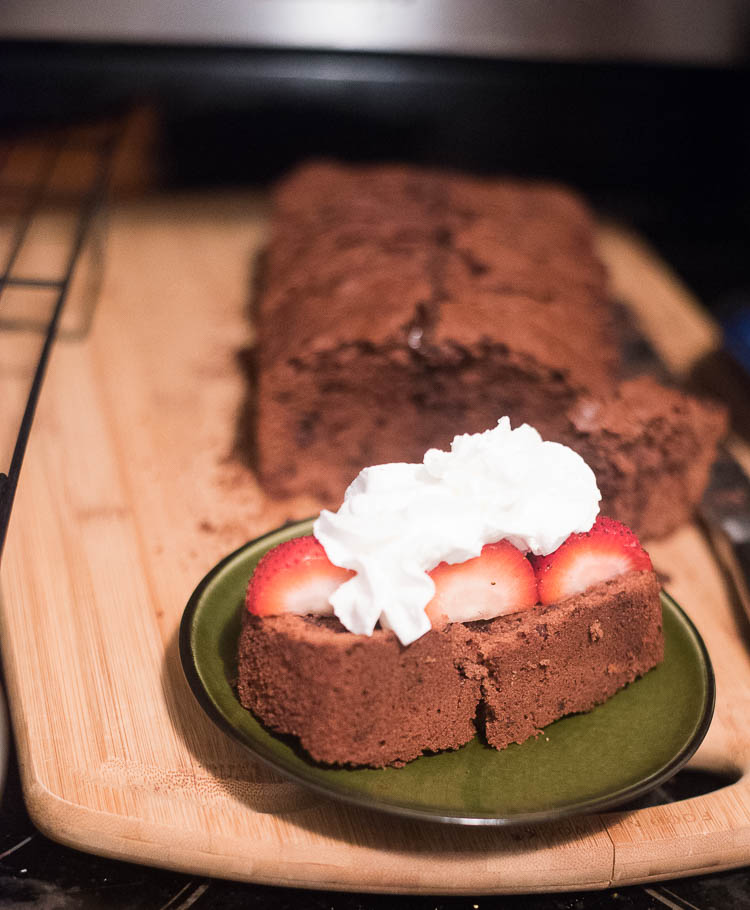 You can eat pound cake all it’s own, but it’s fun to add things to it to make it a little bit more dessert like. We always like strawberries and whipped cream, but you could really serve it with anything. Fruits are always a good option, though I think it would be delicious served with a side of hot chocolate for dipping! 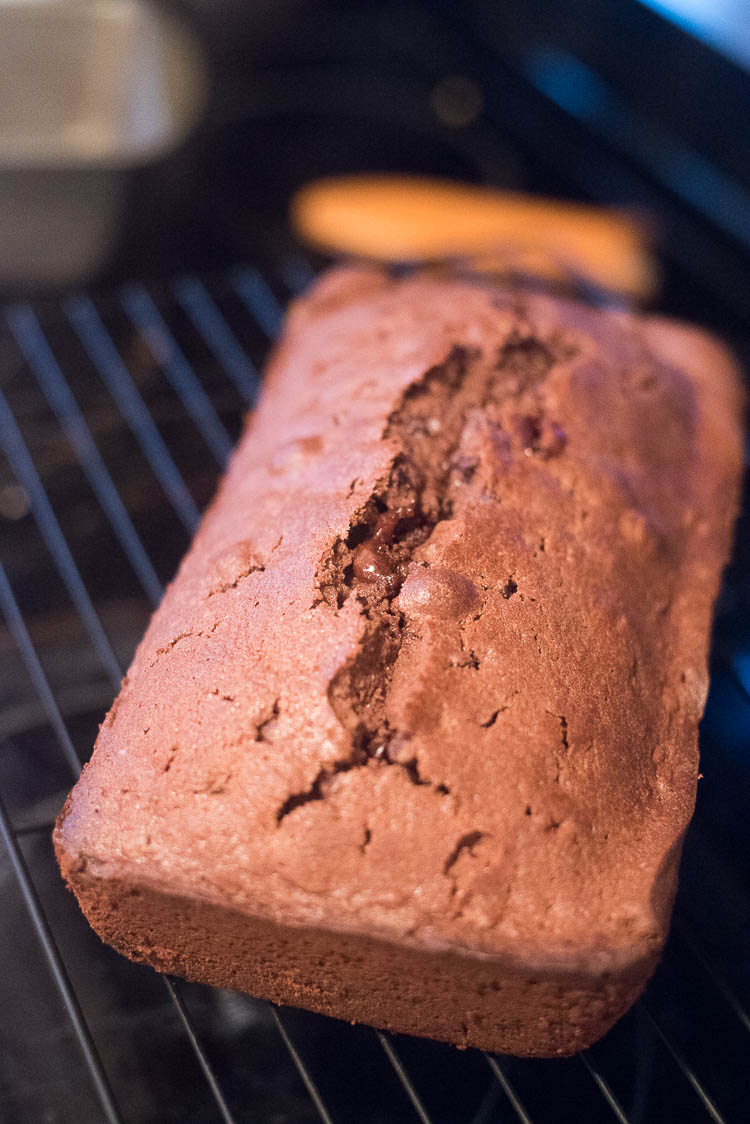 For this recipe, I recommend having either a stand mixer or a hand mixer – you can obviously whip things by hand, but I find electric mixers help to get more air into the recipe. It’s really just faster in general!

I have both a Kitchen Aid and a Bosch Mixer. For this particular recipe, I used my Bosch, and it worked beautifully. A hand mixer with beater attachments will work just fine as well.

Beyond that, you will need a pan to cook it in. This recipe makes two loaf pans or one bundt cake – it’s really up to you for what you want it to look like!

What flour for pound cake? I would use a high quality, all purpose flour.

Why did my pound cake fall? Too much sugar or opening the oven too much during baking can cause the pound cake to fall.

Why is my pound cake dry? The most likely culprit is too much flour. Make sure you are very accurate with your measurements for pound cake.

Why is my pound cake so dense? You may have added too much flour, or you may have beat the butter too fast. Make sure you are slow with beating the butter (and then the sugar into it), so it gets plenty of air.

Why is my pound cake tough/rubbery? You likely over beated the batter. Make sure you just beat it until the ingredients are incorporated.

How to make pound cake moister? A lot of people like adding a 1/2 cup of sour cream for a more moist cake.

What pan should I use for a pound cake? You will either need a bundt pan or a regular bread pan. Just depends on how you want it to look.

How long will a pound cake stay fresh? In an airtight container, it should keep for about three days. If you wrap it in foil and refrigerate, it should stay good for a week. And if you wrap it up nice and tightly, it will keep for up to six months in the freezer.

Can pound cake be made with margarine? Yes, but it needs to be Imperial margarine that is sold in sticks.

You can add a 1/2 cup sour cream to make the cake more moist.

The BEST Dinner in a Pumpkin Recipe
Next Post: HalloweenCostumes.com Coupon Code for 2018 – Two Ways to Save!