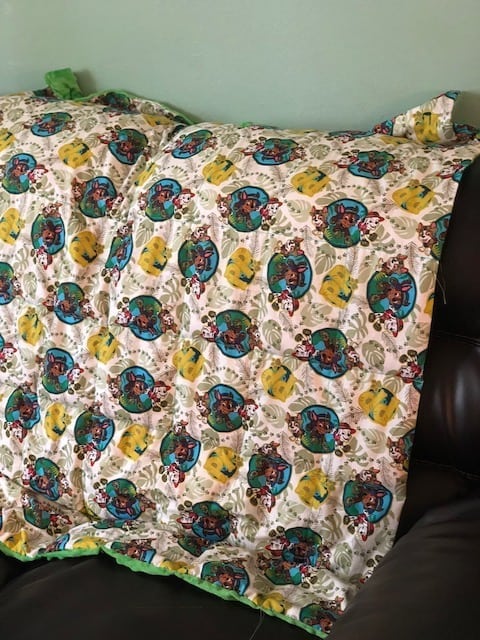 Oliver recently started some early intervention services. We discovered he was a little behind in a few areas, so we thought that extra help would be beneficial to him.

Most of his delays seem to be due to some hearing problems he has (which will hopefully be resolved soon with his ear tube placement), but we also are working on some sensory sensitivity (I believe he’s sensory seeking) and helping him make easier transitions from one part of the day to the other.

The therapist that has been coming to our house has come up with some really helpful ideas, especially in regards to his sensory sensitivities. He’s been really focusing on deep pressure therapy, and I think it’s helped as we implemented some of the ideas.

He suggested that we look into getting Oliver a weighted blanket for bedtime – which is something I had been considering for awhile! 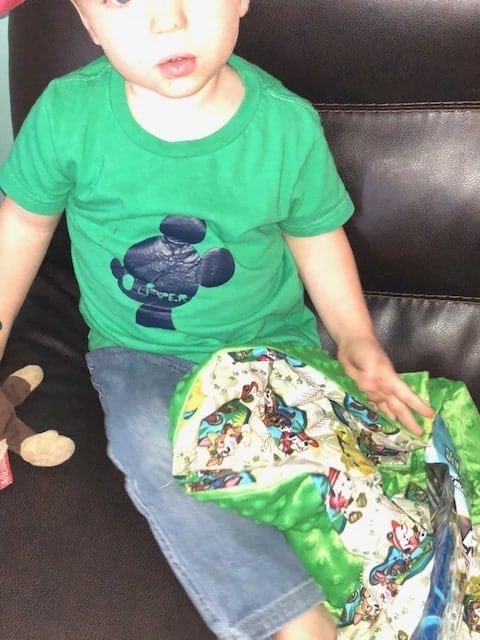 However, with him being a toddler, there aren’t a lot of options out there – and the ones that I did find were at least $75!

As I looked at what a weighted blanket entails, I realized I could pretty easily make one myself for Oliver. It really just requires some fabric, polly-pellets, and some thread.

The materials ended up being around $35 (I used lots of Joann’s Fabric coupons, as well as got 3% cash back with my Ibotta app), which is still a good chunk of change…but definitely more affordable than purchasing one. I used minky fabric, which is a bit more expensive than just cotton, so you can definitely cut costs in that respect if you need to.

After doing some research, I figured out how heavy to make the blanket. I saw a few different tutorials for larger weighted blankets, and I took those into account when I made mine.

As I mentioned, I decided to use minky fabric for Oliver’s blanket, just to make it a little softer. I saw other people recommend sewing cotton to the opposite side of the minky so the polly-pellets wouldn’t get stuck in it – so that is what I ended up doing.

This blanket is really not hard to make – all you need to know how to do is sew a straight stitch. It just takes several hours to get through all the steps, so it is time-intensive. However, it’s easy to make and much more cost-effective than buying the blanket yourself.

Plus, it was nice to let Oliver pick out the materials – I thought he would be more likely to use it if he was involved in that way!

So far, it’s taken him a few days to get him to want to use it, but he’s warming up to it, and I do think it’s helped with his bedtime and nap time. He has been sleeping about an hour longer in the morning, as well. So I consider it a win!

Although this tutorial is for a toddler weighted blanket, you can easily adapt the principals of it to make a blanket for a larger child. Just follow the math and get material that is a little bit longer, and you should be good to go! I think this blanket size would work well for a child from ages 2-5. Even my six-year-old, Jack, likes it (though you would obviously increase the weight for an older child!) 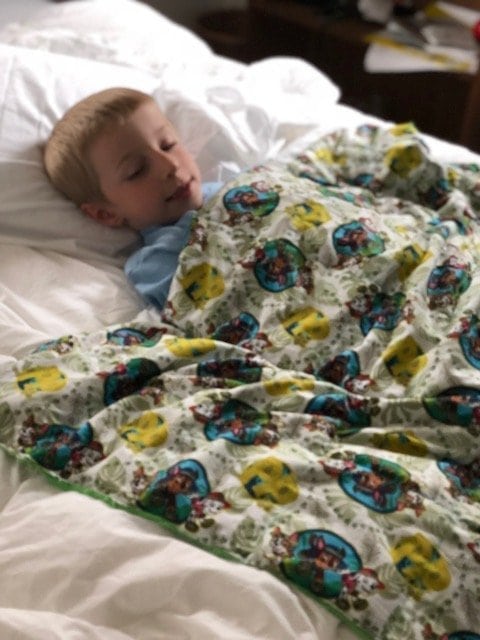 First off, I wanted to share a little bit about weighted blankets:

What is a Weighted Blanket?

A weighted blanket is a blanket that is filled with some kind of bead (poly-pellets are most common) that make the blanket heavier than a standard blanket. It produces Deep Pressure Touch Stimulation (DPTS), which helps to reduce joint and muscle stiffness and soothes aches and pains.

Warning: Weighted blankets should not be used by children under the age of two, as they may not be able to remove the blanket if it goes over their head, heightening the risk of suffocation.

How to Make a Weighted Blanket

36×40″ material for front and back of blanket – if you are using minky, you will need an additional piece of cotton material. I just got 1 yard of 43″ fabric, so the dimensions don’t have to be exact 🙂 I think it ended up being about 36×40″ in the end.

Determine how many pounds of poly-pellets you need. It is recommended to do about 10% off your child’s weight, plus 1-2 pounds. We ended up doing four pounds of poly pellets.

If you are using Minky, follow this step. If not, skip ahead to step two. Please read this post for tips on how to sew with minky:

Pin minky and cotton together with wrong sides together. Sew with a 1/4″ seam allowance. 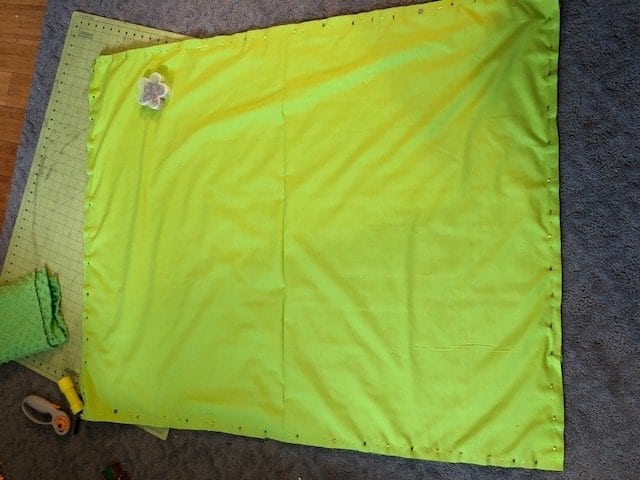 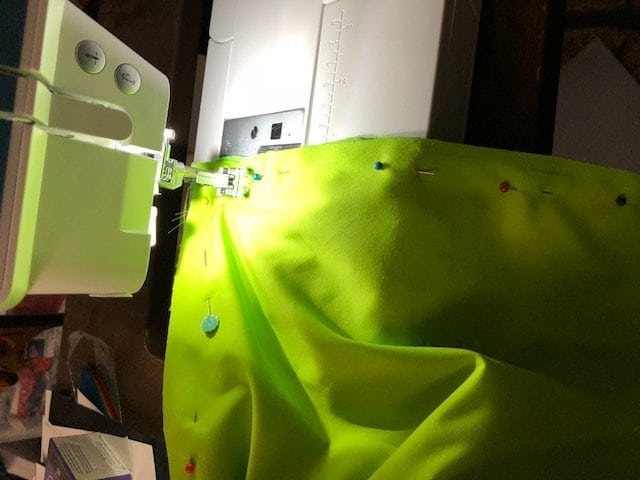 Next, pin the minky to the other piece of cotton (that will be the exterior print on the blanket). Sew around the two long edges and the bottom, keeping the top edge open. 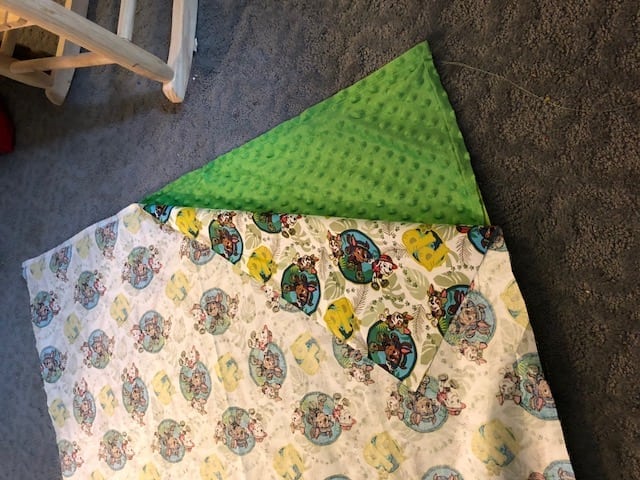 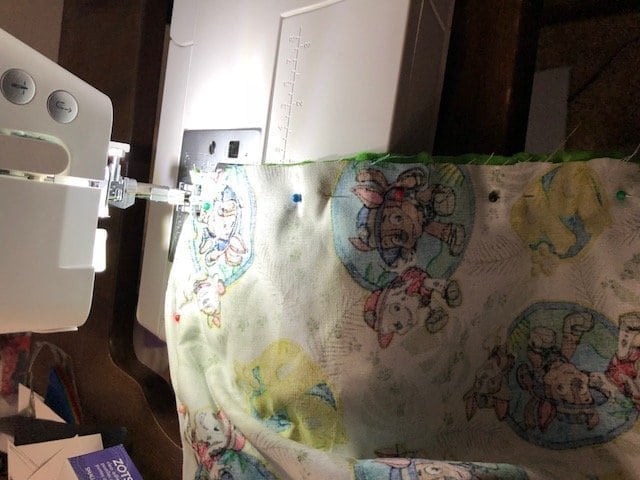 Decide how many columns and rows you want. For Oliver’s blanket, I ended up doing 7 columns and 7 rows – so they didn’t end up making perfect squares (more like rectangles), but it worked out just fine.

Using a straight edge and a washable fabric marker, draw your rows and columns on the top cotton layer of the blanket. 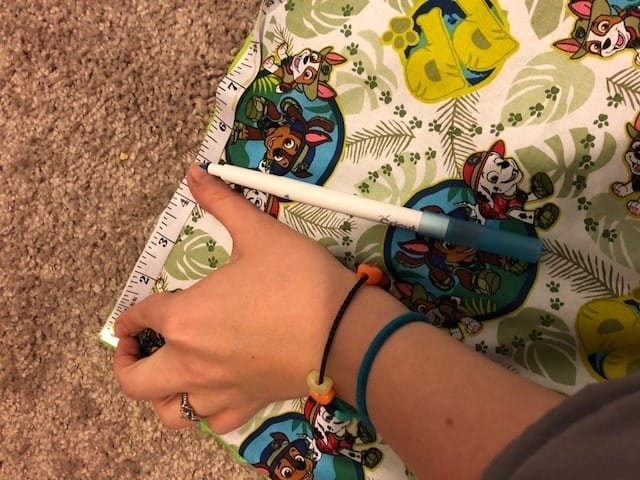 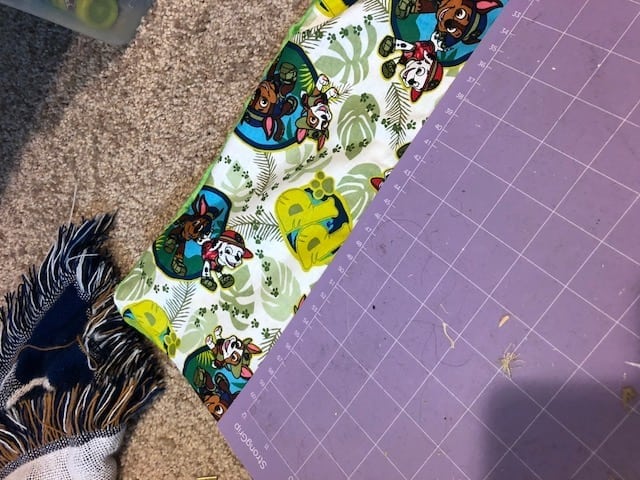 Sew down each of the columns on the blanket, starting about 1/2″ down from the top edge of the blanket. 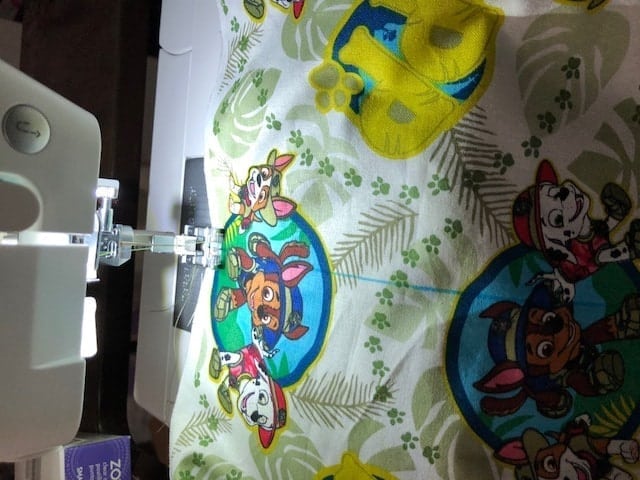 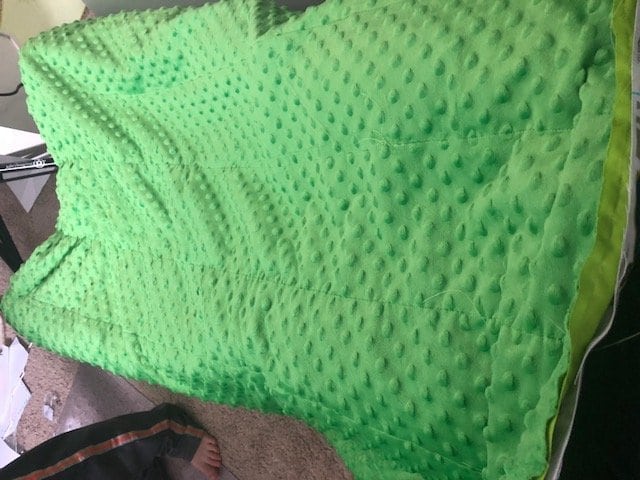 Now it’s time to fill blanket! This is probably the most time intensive part of this whole project.

First off, determine how much weight you want to be in each square (after you sew the rows, there will be a bunch of small squares).

You will first start with the weight of the polly-pellets you’ve determined you need. We used four pounds for Oliver’s.

Then, you will convert that to grams (here is a converter chart).

Then, figure out how many squares you will have in the end. This will just be the number of columns you have by the number of rows.

Divide the number of grams total you have of polly-pellets by the number of squares, and that is how many grams you will need in each square!

Here is my equation I used:

So each little square had 37 grams in each. 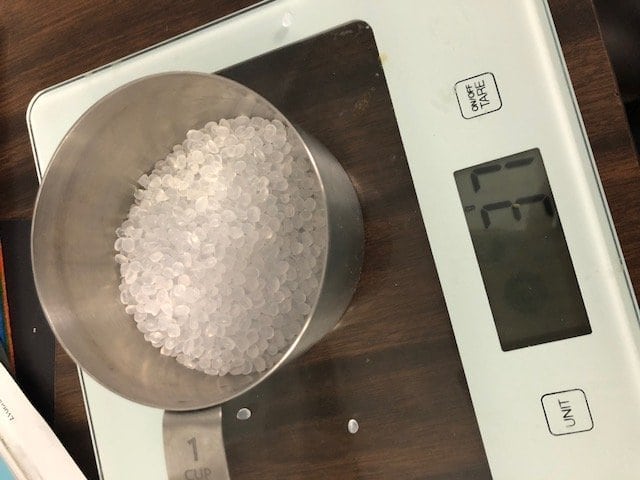 For the first “round”, I measured out 37 grams in a measuring cup, and I poured it into each column. Repeat this for each of the columns. 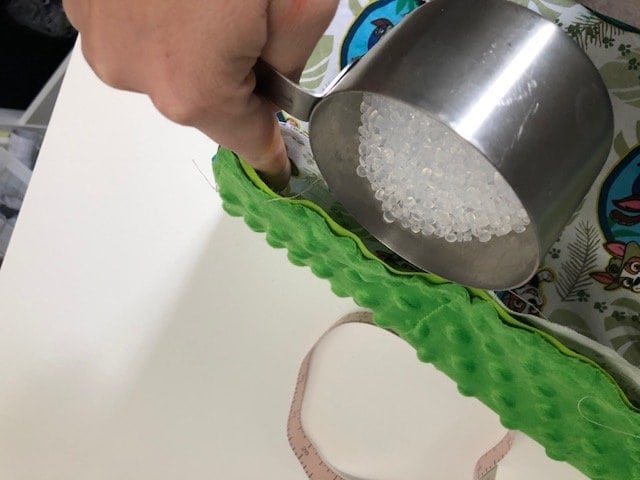 After you’ve put the poly-pellets in each column, run your hands down each to make sure none of them get caught on the way down. Then carefully sew across the bottom row – making sure the beads stay at the bottom, already sewed edge (I broke two needles from beads that made their way up). Check after each completed square to make sure the beads are in the correct position. 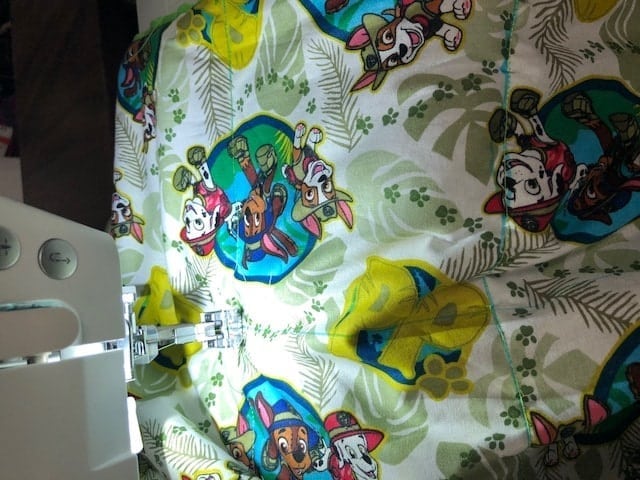 After the first row is done, repeat the steps for adding poly-pellets from step six. Then, sew the row shut like in step seven until all the rows are complete. On the last row, fold in the raw edges of the fabric and sew a 1/4″ seam allowance. 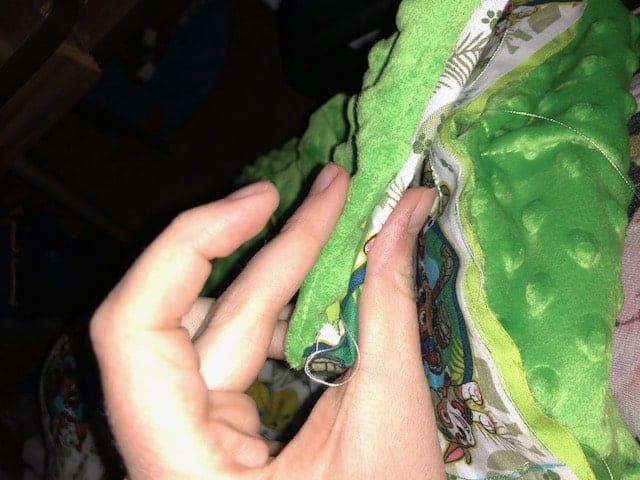 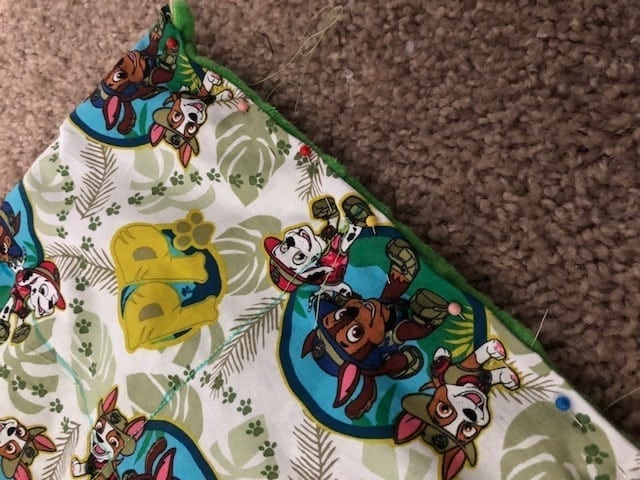 And now you are done! You can sew a finishing stitch around the edges if you like – however, I didn’t do this because the beads were getting too close to the edge, and by the time I was done sewing the crucial parts of this project, I was D-O-N-E. 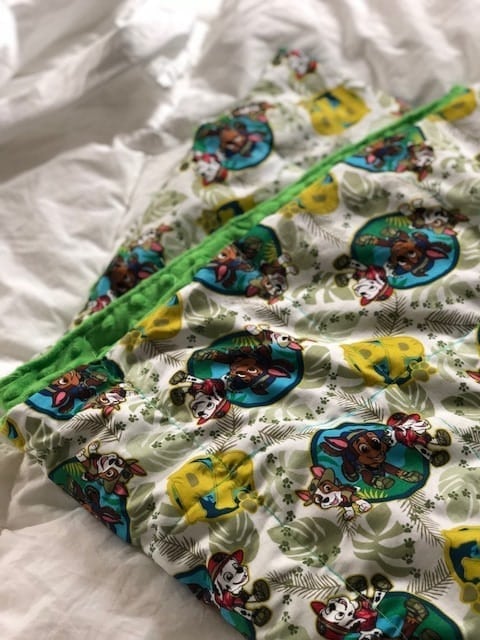 Please let me know if you have any questions!

Not sure you want to make one? Here is a great weighted blanket you can buy.

OTHER PROJECTS YOU MAY ENJOY: