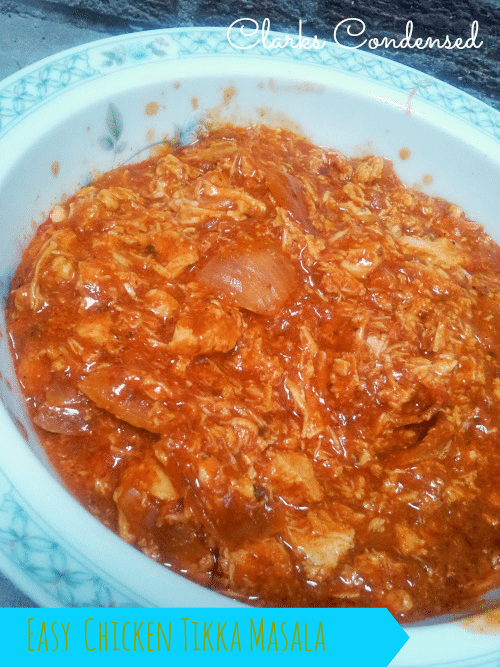 We love Indian food at the Clark household. There was a restaurant back in Provo called India Palace that we went to every now and then that was so delicious. Not only did they keep our water glasses completely full (literally the second we drank out of our cup, it seemed like they filled it back up) but the food was just…indescribable. Until we went there, I had really not been exposed to a lot of Indian food, and I realized how much I had been missing out on.

Unfortunately, Indian food can be rather pricey, so we can’t really afford to go out and get it often. So imagine our delight when, last summer, we came across Patak’s Indian Simmer Sauces, being sold in a three-pack at Costco. We picked up a package and immediately prepared a quick and easy meal with the Tikka Masala sauce. It was so good, and tasted almost restaurant quality. You’d better believe we went back to Costco and bought a few more three-packs, in fear that they would sell out and never come back!

Fortunately, we’ve found several other stores that carry Patak Simmer Sauces, such as Target. We typically cook up some chicken on the stove and then pour the sauce on top to simmer for about 10 minutes, which is way easy. However, the other day I came up with the idea to use it in crock pot. It seemed simple enough, and it turned out really well. I added onions, and after just a few hours, it turned out perfectly.

So if you came here looking for an easy Tikka Masala recipe that is homemade, I’m sorry to disappoint. I know, nothing compares to something being homemade. But if you came here looking for an easy, crock pota Tikka Masala recipe that literally takes minutes to make, then I hope you’ll be excited to try this. I used the chicken I made from this for the topping of another super secret recipe I’ll be sharing on Tuesday…but even just served over rice and with a side of naan, this is the perfect, simple meal.