Sign Up!
Home » 6 Factors To Consider Before Buying a Smart Phone 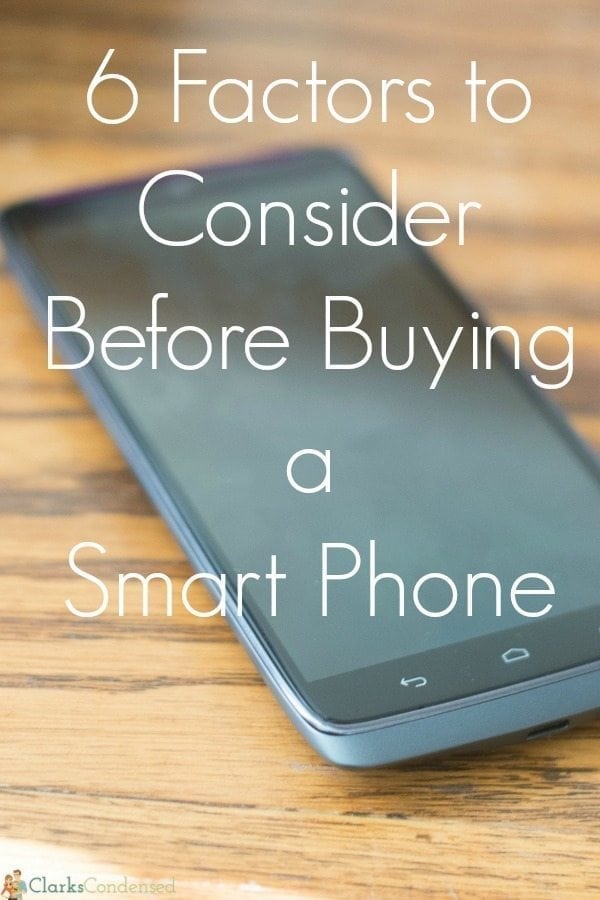 I’ve been through many smart phones since I got my first one around the age of 18. Whenever we go to the mall, I can’t help but stop and play around with the latest and greatest smart phones that are available. While I never have the most recent phone, I like to have one that is powerful and let’s me accomplish different tasks (particularly relating to my blog). I watch smart phone reviews on CNET and YouTube for fun. Yes, I’m kind of nerdy.

Through all of this, I’ve come to discover what are some important things to consider before buying a smart phone. Because, no matter what one you get, it is an investment, and to me, when I’m making an electronics purchase – I want something that is going to last. I don’t like having to replace my phone six months after I bought it (or three days after I bought it because the screen was so fragile, it broke with a simple drop.) So, whenever I’m considering a new phone, here are 10 things I look at. I will also be mentioning some details throughout this post about the DROID Turbo, an amazing phone that’s great for moms, travelers, photographers…and really just about anyone. It’s definitely the ultimate smart phone.

There are so many smart phones out there, and they come in a wide range of prices. The smart phone you can buy for $25 at Walmart is certainly going to have less features (and overall quality) than a $700 phone. It’s up to you to determine what features are important to you and worth paying the extra for. For instance, some smart phones have a ton of features, but you really need to think about whether or not you will actually use them (therefore justifying the cost.)

It’s good to shop around and find the best price. Sometimes you can get a phone financed through your cell phone company for a certain amount for two years (if you are on month-to-month plan, typically). If you have a two-year contract with a phone company, you can typically get the phone for less up front that you would have otherwise. You can always buy phones on Ebay, Amazon, and websites like Craigslist but doing that comes with their own risk.

My advice? Decide on a budget, determine what features are important to you, and stick to it. 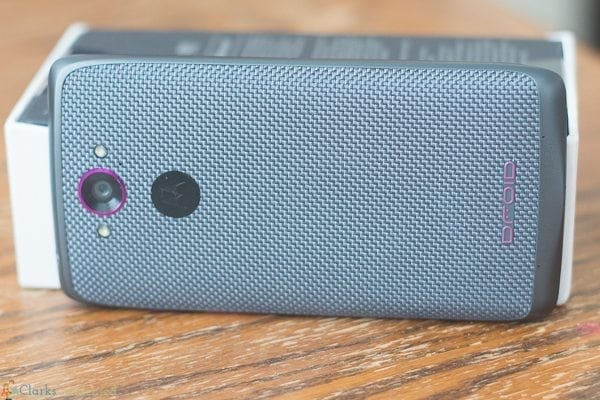 Who wants to buy a phone that’s going to break in a few months? Not anyone I know! Phones have a certain level of durability, and it seems as if some are becoming quite invincible. You can read about different specs related to a phone’s durability online, and there are plenty of reviews about durability as well. Popular phones have drop tests that have been done on them. Take it from me – if you have kids, you want a durable phone. Or if you just have slippery hands or tend to be more accident prone!

Some durability factors to keep in mind are:

The exterior – What kind of material is it made out of? Some phones just have cheap outer casings that are easily banged up and broken. Some phones have metal exteriors, others have plastic, etc. There are exteriors and screens that are scratch resistant as well. I highly recommend buying a case no matter what you do to preserve the exterior of your phone. Forrest and I both use Tech21 cases, which aren’t bulky at all, they are shock resistant, and they’ve protected our phones pretty well. They are reasonably priced as well.
The Screen– Even more important than the exterior case, in my opinion, is the screen on your phone. There are many different materials a phone’s screen can be made of, and some are definitely more prone to cracks and scratches. First off, make sure you get a plastic screen protector installed on the screen, which will protect against most scratches. However, these plastic coverings won’t protect against the screen cracking and breaking. I’ve been most impressed with Corning Gorilla Glass (which I previously wrote about in this post about kid-proofing your electronics.) It’s stronger, more scratch resistant, and has survived many drop tests! The DROID Turbo has the latest version of Corning Gorilla Glass.

Another thing to keep in mind is how much it would cost to replace the glass if it does crack or break. Some phones are very inexpensive to replace the screen (especially if you are handy enough to do it yourself), however, other screens can cost almost the amount of replacing the phone entirely.

This doesn’t really have to do with durability, but you want the screen resolution to be at least 480×800. The DROID Turbo is a whopping 1440×2560, which is more than a lot of computers!

Water and Dust resistance – Many phones are coming out to be dust and water resistant, which is awesome. I know that I’ve had water accidentally spilt on my phone, or I’ve gotten caught in a rainstorm, etc. and it’s always stressful. While there are tricks, such as putting a wet phone in rice, there’s no guarantees. While water and dust resistant phones aren’t full-proof, they are definitely going to have you protected a little bit more. 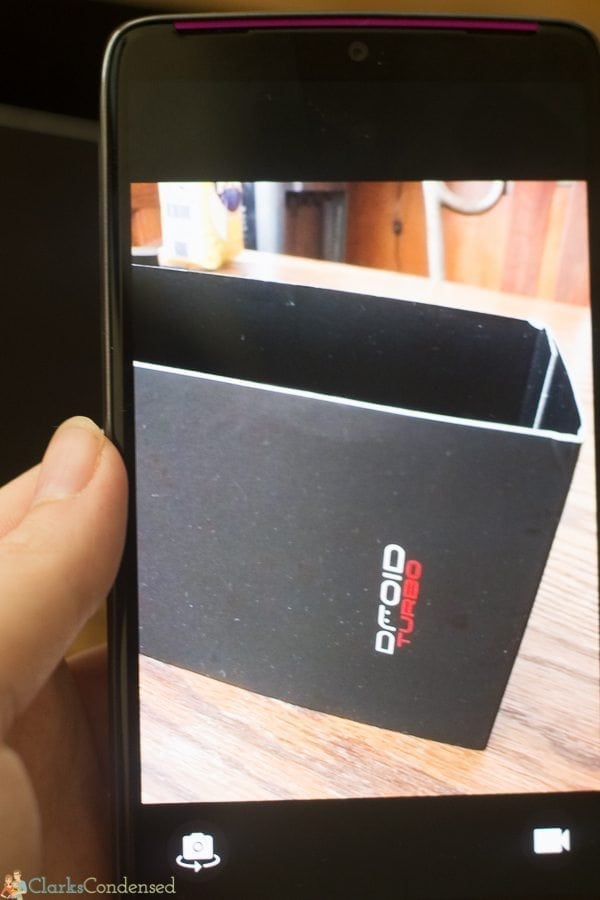 If I’m being honest, the camera on my phone is the most important feature. The last phone I owned had a terrible camera. It claimed to have a high megapixel camera, but the quality of the photos was comparable to an old flip phone I used to own. Since the only other camera I own is a big DSLR, I usually rely on my camera phone to capture our day-to-day moments (you know, those ones that I upload to Instagram to help create my Chatbooks – just about the only form of scrapbooking I do nowadays.)

Just for fun, here’s a picture we took with the DROID Turbo. It was very clear and high quality! 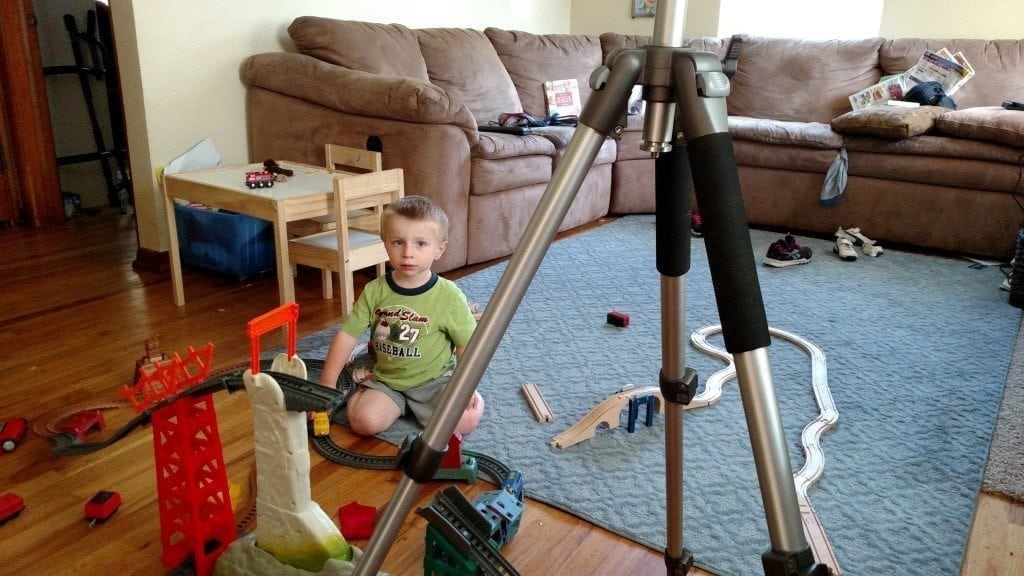 The number one thing I hear people complain about with their smart phones is when there is a lack of storage. I know many people that can’t download more than one or two apps without their phone telling them they have no space (my mom has to pick and choose from these money making apps she wants to download, which is annoying for her. #FirstWorldProblems.) What’s the point of having a smart phone if you can’t do anything with it?!

When looking at the memory for your potential phone, you want to look at a few different things:

Smart phones aren’t always known for having the greatest battery life – which can be soo annoying. For instance, the phone I currently own lasts for like two hours before it dies. It’s ridiculous and inconvenient – I have a portable charger that I have to bring with me everywhere. Most phones give an estimate of the battery life, but this is one of those things where I’d seek out consumer reviews for the actual battery life.

One thing that really impressed me about the DROID Turbo is the fact that it has a proven incredible battery life. It can supposedly last up to 48 hours. While I’d imagine it doesn’t go quite that long with heavy use, we have only had to charge it once in the past four days, which I’d say is pretty great. It also can be charged up in about 15 minutes for eight hours of charge, which is great for those times when you really need it charged quickly. As Forrest mentions in our review video below, he played a soccer game on the phone for quite awhile, and it barely made a dent in the battery. On his phone, it probably would have been dead soon after.

I believe that before you buy anything, you need to spend a lot of time reading reviews. For smart phones, I typically recommend CNET.com for professional reviews. They typically go in depth and have a lot great information about the pros and cons of a phone. After reading a few professional reviews, I’d then turn to consumer reviews. This is where you can find out the really nitty gritty details of how a phone performs under day to day use. There will always be people who got a lemon, or who are just negative about everything, but if you can find a website with at least 100-200 reviews, you can get a better idea of how well a phone works.

Here’s a video review of the DROID Turbo that Forrest did. We’ve only tried been using this phone for about a week, but we’ve gotten a pretty good idea of how it works. YouTube is another great place to find reviews (and you’ll typically find a lot more consumer reviews on there as well.)

Bonus: Test before you buy

I very rarely buy something without testing it out in person. There’s just something that comes from an in person experience. You may find that a phone is too large or too small, or too difficult to use if you try it out in person. For smart phones, you can almost always find test phones at places like Best Buy, Verizon, other cell phone providers stores, and pretty much any tech store! Before I buy a phone, I usually spend at least an hour in the store testing out the ones I’m considering (and usually going back and forth, and back and forth!)

More on the DROID Turbo

I mentioned the DROID Turbo a few times in this post, and it is seriously one of the coolest phones available. It’s the latest in the DROID line, and it’s by far the most impressive. We’ve had the opportunity to test it out over the past week, and if you are looking for a phone with a lot of sleek features, an great camera (with incredible video recording capability), and an amazing battery life. It’s available in gray ballistic nylon with the choice of metallic orange, metallic violet, or metallic blue accents. The phone really raises the bar on what smart phones can do. It’s available exclusively through Verizon and can be bought here!

Get your DROID Turbo by Motorola in Gray Ballistic Nylon with your choice of metallic orange, violet and blue accent colors at Verizon.com.

Motorola sponsored this blog post. The opinions and text are all mine.