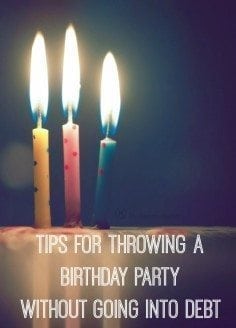 Over the past few months as I’ve perused my “Birth Month Club” on BabyCenter.com, one of the hottest topics was first birthday parties. Most everyone who commented had been pretty much planning the party before their child was born, and were so excited to finally put their plans to action.

And yes, I’ll admit I’m one of those moms. I had the theme for Jack’s birthday party picked out early on, as soon as I noticed a certain affinity he had toward his Very Hungry Caterpillar that his Aunt Meredith gave him.

However, as I read some of these posts, I quickly found myself feeling out of place. One particular thread was about budgets for the birthday party. I was shocked when I saw many mothers talking about a budget of between 500 and 1500 dollars.

Now, to each his own. But I couldn’t believe that someone could spend that much money on a birthday party! Maybe that’s how people that aren’t students and poor party, but I know I could never justify that much even if we were rolling in the dough.

Even though our budget was rather tight for birthday celebrations, I knew I still wanted to do something fun. To be honest, I just love throwing and planning parties, so his first birthday was a great reason to! So over the past several months, I’ve found ways to save money, but not skimp on quality. I have definitely spent money, don’t get me wrong, but I’ve kept it under $100 (for presents and party), and I think everything has, and will, turn out just as nicely as if I spent $1500 (Ah. Still can’t get over that!)

Here are a few ways to celebrate a birthday on a budget.

We are big fans of the store Once Upon a Child. They don’t have one in Utah, but whenever we are visiting my family in Colorado, we make at least one or two visits there. Most of Jack’s warddrobe is from there. And I don’t feel one bit guilty that we bad things “second hand.” Because, if you’ve ever tried to sell clothing or toys here (or similar stores), you’ll know that they are super picky.

One thing I loved about Once Upon a Child, is that they actually have quite a few new toys, or things you would never know they were used. And for that reason, this is the perfect place to buy presents. We spotted this toy there this past December, brand new and in the box: 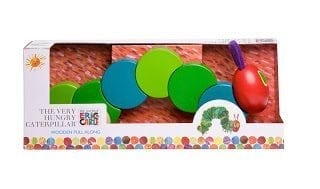 At this distributor for this product, it is 25.95. We bought it for 3.50. Now, would we have ever purchased it for 25.95? Absolutely not! But for 3.50, we snatched it up in an instant. And this is often the case at second hand stores. I have seen some awesome toys, anywhere from
And even if you don’t have a store like Once Upon a Child in your area, hit up stores like Ross and TJ Maxx. They get products from stores like Kohls, Target, and Walmart, and then heavily discount them. We’ve gotten some awesome things there, especially at Christmas-time.
Kids, especially babies, don’t probably know or care if something is new. As long as it’s fun and clean, they’ll be happy. However, we were able to get several new items for Jack because of how often I read deal websites. I got some really fun toys, for over fifty percent off, just because I happened to be reading Freebies2Deals at the right time. Be sure to read about other ways I’ve found to save money online.

This is probably one of my favorite stores, ever. While I don’t think I’d ever buy any of the frozen food here, the party section is awesome. For Jack’s birthday, I went to several different stores looking for a birthday sign and the perfect birthday tablecloth. Some of these stores had a few that I liked, but boy, were they expensive! So the night before Jack’s birthday, we headed over to the Dollar Tree, and as luck would have it, they had just what I was looking for. And for WAY less expensive than any other store I’ve been to. After doing some price comparison, the Dollar Tree tends to be way cheaper when it comes to party supplies — everything from plates and forks, to wrapping paper and decorations. I hadn’t bought wrapping paper in awhile, and when I was seeing rolls at most store for 4-6 dollars, I knew I had to hit up the Dollar Tree. Yes, the rolls have less than some of the more expensive ones…but just buy two rolls, and that just about equals one of the bigger rolls. And most of the stuff doesn’t seem really cheap.
The dollar store is also a great place to buy party favors. Sure, the candy isn’t exactly name brand, but it still tastes good. And there are so many fun little toys that I’m positive any child would be thrilled to get in their goodie bag.

This is probably one of the ways I’ve saved the most amount of money when planning Jack’s party. Doing it all myself. I’m not the most crafty person in the world, but I can follow instructions. And I’m willing to bet that most people can. There are so many tutorials for just about anything you could ever dream of — from fondant on a cake, to awesome homemade decorations.
On one of those days where I was feeling particularly unmotivated, I looked around at prices for cupcakes and a smash cake for Jack’s party. Um. That just about would have taken my entire budget to do! I’m sure that my cakes won’t look as professional or fancy (I once took a cake decorating class. Epic fail.) But they will taste just fine, and cost a whole lot less. The same goes for food.
By at least trying to do most of the cooking and decorating yourself, you’ll save a bundle. And don’t be afraid to ask friends or family to help. If you feel a little less talented about doing something, you might have someone close to you that would be willing to help.
Although Pinterest can make anyone feel inadequate, it’s a great place to find DIY ideas. That’s where the inspiration for most parts of Jack’s birthday party have come from

One of things that baffled me most about some of the people on BabyCenter was how much they spent on the venue for the party. Some people were spending $1,000 alone. Now, I understand not having enough space in your house if you want to invite more than five people. Believe me, we live in a two bedroom apartment. But there are plenty of places and ways to have a party at a place where a lot of people can attend.
For us, we are able to use certain rooms at our church building free of charge. I know that isn’t an option for everyone, but if you are a member of a church, definitely check into that option.
A lot of apartment complexes, and even neighborhoods, will allow residents to use a club house to host parties. Many times it will be free, or there will be a minimal deposit required. This is a good option because there is typically a lot of space, sometimes a kitchen, and even a large room where kids can play.
Even if you don’t have a big house, a family member might! I’ve been to plenty of parties held at a family member’s home, that is large enough to host a big crowd. While you shouldn’t just automatically assume someone will let you use their house, it’s worth a shot asking.
And finally, if the weather is reliable enough, the park is always a wonderful choice. There’s plenty of room for kids to run around and play, grass to sit on and relax, and usually picnic benches. A lot of parks do require some kind of reservation, and sometimes a fee, but it’s definitely a great option for a party. If the weather wasn’t so unreliable around here, that’s definitely where Jack’s party would ahve been.

Hey, there is NO rule saying that kids have to have huge, extravagant parties. There is nothing wrong with having a small party with just family, and maybe a few close friends. In fact, I’m sure that the only big party that we’ll throw for our kids is their first, and probably their sixteenth. Everything else will likely include a small family party on the actual birthday, and small friend party when they are older (if they want!) I mean, we plan on having at least two or three more kids. There’s no way we could afford to throw big parties every year! Keeping a guest list small is a certain way to cut costs.

It can be hard, living in the Pinterest-perfect world that we do. I feel plenty of pressure to throw the party of the year, have yummy food, and perfect decorations. But the best way to save money on birthday parties, is to keep it simple. Don’t feel like you have to have a professionally made cake, or hire a professional caterer. Do whatever you want, regardless of what the Jones’ are doing next door. As I mentioned yesterday, I do feel like birthday’s should be special. But special does not equal expensive.

Do you have any ways that you’ve saved money at birthday time?