Birthday cakes are so fun, don’t you think? I always looked forward to mine each year growing up, and still, on my birthday each year, I always get excited. My birthday cake of choice always used to be German chocolate with that yummy coconut frosting from Betty Crocker. Even though this was my mom’s least favorite kind, she faithfully baked it each year, not just for me, but for my dad’s birthday, and probably other siblings over the year.

Since Jack isn’t old enough to really have a say in it, I decided to make whatever kind of cake I wanted to! He isn’t supposed to have very much sugar (he has a fructose intolerance, along with his lactose intolerance,) so he has really never had anything sweet. While I couldn’t really avoid the sugar in the cake (because we don’t use artificial sweeteners, and the doctor said to absolutely avoid those for Jack,) I did omit all dairy. I was nervous about how it was going to turn out, but dare I say it, this turned out to be one of the best cakes I’ve ever baked! 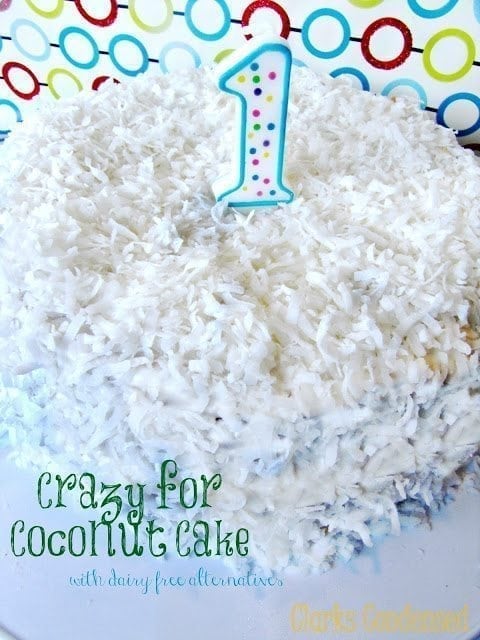 The original recipe called for more sugar than I used, so this cake part wasn’t super sweet in this. To be honest, it had a similar taste to cornbread — without the corn. I was a little worried that it was going to be bland, but combined with the frosting, it was the perfect combination.

I found the idea to use the Coco Lopez Coconut from Chef-in-Training, and that really pulled the cake together and made it really moist. I was very pleased that this dairy free coconut cake turned out tasting better than any other cake I’d ever made (and if dairy free isn’t your lifestyle, don’t worry — I’ve included the dairy way, too.)If you hate coconut (like my mom,) then this probably isn’t the cake for you. But anyone else will probably love this — I know I did.

Jack seemed to really like it, though he was very dainty about eating it, so he only got a few bites in…which was probably for the best. The coconut that I covered it with really covered up my terrible frosting job, and I think it made it look slightly more professional!What is your favorite kind of cake to have on your birthday?