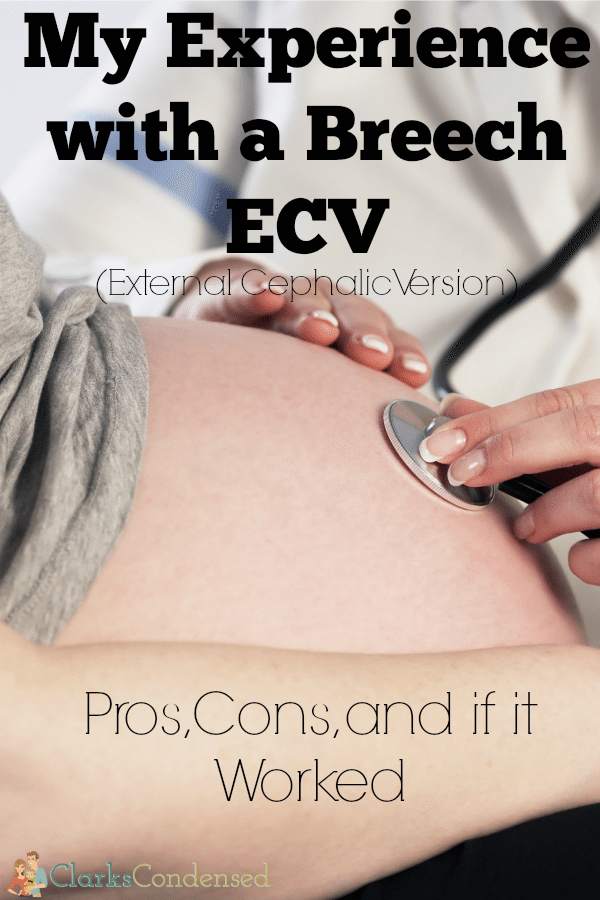 When we found out that baby boy #2 was breech, our physician said we could either just schedule a c-section or try what is called an External Cephalic Version, which, in layman’s terms, is basically manually trying to turn the baby. She said they only did them at 37+ weeks, and since I was 37 weeks the next day, I could have one then. Since I wanted to avoid a C-section if at all possible, we had her schedule one right away.

Of course, I went home and did what everyone tells you not to do – consult with Dr. Google. I wanted to know exactly what to expect, the success rate, and any dangers associated with the process. It seemed rather…rough. As I searched through forums, articles, etc. I felt pretty well-informed about what would happen. Of course, I ran into a few experiences that people had that scared the heck out of me…but fortunately my good friend and experienced Labor and Delivery nurses, Hilary from Pulling Curls, reassured me that it was a routine, safe procedure. She tends to keep me level-headed in the baby/pregnancy department, especially when I get mixed messages from doctors.

I read several helpful blog posts from other moms, and it put me a bit more at ease as well, so I thought I might as well share my experience as well, in hopes that it might help someone else!

The thing with ECV is that the success rates are extremely variable. I saw numbers from 20 percent all the way up to 80 percent. The success appears to be contingent on a bunch of different factors:

There aren’t a ton of risks involved – I believe I read that the chance of those risks happening are between 1 and 2 percent. Of course, if you were to believe some of the online forums, you might convince yourself that it’s like 75%, but you shouldn’t believe everything you read online (unless, of course, I say it. You should believe everything I say.) However, because there are some possible risks, the procedure has to be done in a hospital where an OR is available in case something goes south. My doctor said that in her experience, she only knew of one ECV where the baby had to be delivered immediately. The main risk is the baby’s heart rate becoming erratic and not recovering, a placental abruption, lots of contractions, and water breaking.

So, back to my experience. Our appointment was at 12:05, but we were told to be there two hours before. Most of that time was being checked in, having the fetal monitor and contraction monitor put on my belly, and getting my blood drawn and an IV placed. I was also told to come fasting from water and food (in case an emergency c-section was required).

About 30 minutes before the procedure was scheduled, one of the doctors who would be doing it came and did an ultrasound to confirm baby was still breech – which he was. She measured the fluid and told me it looked like it would probably be successful. That gave us hope!

When it was time to start, the doctor and one of her colleagues came in, along with a nurse. They turned on the ultrasound to monitor the baby and to see if they were getting him to move. Before they started, they gave me a relaxant called Terbutaline that would help prevent contractions and hopefully help with any pain. When I was reading different experiences online, some people said it was the most painful experience of their life, which made me nervous. They also said the Terbutaline made them super jittery and have a headache right away.

Well, I didn’t experience the effects (well, the jittery ones) until several hours after the procedure. It was very strange – but I did not like the feeling when it did go into effect!

Anyways, they started the version, and it was an odd experience. I didn’t feel any pain, but there was pressure…it wasn’t that bad though. Forrest said it looked very uncomfortable though, and one of the doctors commented on how it seemed like such an archaic procedure. For about five minutes, the doctors took turns pushing on the baby and trying to get him to move head down. At one point they got his head down, but then he just flipped back around and starting tucking his head into his chest to avoid them. Baby boy didn’t not want anyone messing with him!

In the end, they were not successful, and we were disappointed – especially since we kept getting told it was very likely to be successful. They told me to come in a week later to check the position and see if the baby flipped on his own (which one of them said she thought might happen, and the other said was unlikely to happen. ha!) If not, they would schedule me for a c-section. I will say that I loved the doctor who did it. She was very kind.

So, just a brief overview of the pros and cons of an external cephalic version:

Fortunately, as of right now, the baby has flipped to the head down position, and I’m praying he stays that way. I found a lot of alternative ways to try and flip a baby – several of which are documented as being good alternatives – and I will sharing that experience soon (some of which I feel may be worth trying before doing an ECV.) I was in a lot of pain after the ECV the next few days, and my stomach was somewhat bruised. The after-effects of relaxant they gave me weren’t particularly pleasant either. I do think it’s a good thing we tried, and had the baby not flipped, I would have insisted they try one more time before they did a c-section (even though my doctor said that doesn’t work – I beg to disagree after talking to friends and reading countless experiences where the baby did turn with a version right before a C-section!)

Let me know if you have any questions! And remember – I’m not a professional. This is just my experience and you should ABSOLUTELY talk with your physician about your options.