Looking for some good Southern food in the heart of Denver? Look no further than Tupelo Honey – their cathead biscuits, fried chicken, and friendly atmosphere will have you coming back time and time again. 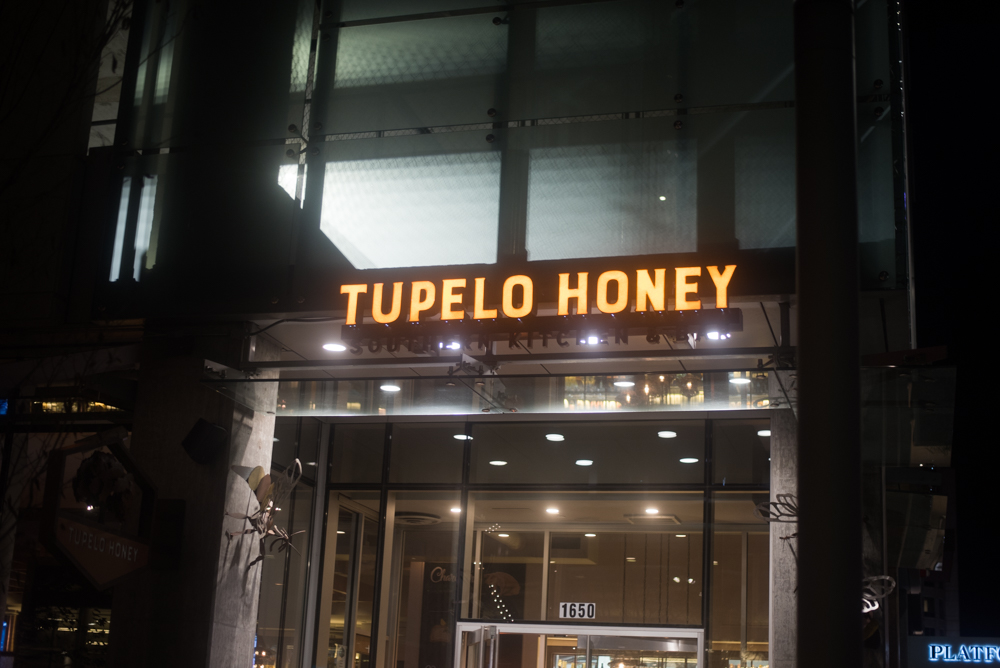 Recently, on a blustery fall day we were invited to dine at a restaurant in downtown Denver called Tupelo Honey.

I was excited because the restaurant specializes in Southern food. As someone born and raised in the South by a Southern mother, I looked forward to some dishes and flavors I haven’t tasted in a while.

I ended up really enjoying the experience. I enjoyed the quality of the food, and I left impressed with Tupelo’s creative and intelligent approach to their recipe creation.

First, what is tupelo honey, the namesake of the restaurant?

I had never heard of Tupelo honey before visiting the restaurant. According to Wikipedia, Tupelo honey is honey made from bees who visit the flowers of the Tupelo tree.

Tupelo trees grow well in the Gulf Coast region of the United States, particularly in Florida. Tupelo honey is known for its light, mild taste, as well as having a high fructose to glucose ration.

Personally, I assume the honey that was served to us was Tupelo honey, and it was delicious. They sell jars of Tupelo honey as well if you’re interested.

Overall, Tupelo Honey describes its food as a revival of Southern Food, which means that they provide their own unique twist to traditional Southern food. I felt that all of the food was high quality in its ingredients, its conception, and its execution.

I remember specifically noting how each dish had a clear variety of textures. The crispy elements were actually crispy, and the soft elements were appropriately soft.

Additionally, I felt that all of the food could appeal to non-southerners. In my experience, every class of food has its dishes that are more of acquired tastes. However, I didn’t really feel like the any of the food at Tupelo Honey was in that acquired taste realm. It was just quality food that I think anyone could enjoy, or, at the very least, find something they could really enjoy – some people are just picky.

We have arranged a limited time discount code for a to-go order from the Tupelo Honey Downtown Denver location. You can get 30% off with the code CLARKSCONDENSED – and you can order here!

We decided to order a few appetizers, which on their menu are listed as snacks and shares.

We enjoyed their cathead biscuits with blueberry compote and whipped butter. I believe ours came with honey as well. The biscuit were what my mother would call drop biscuits. The biscuits were huge and delicious. Every element tasted well made. All of us really enjoyed these. They just tasted like perfection in a biscuit. 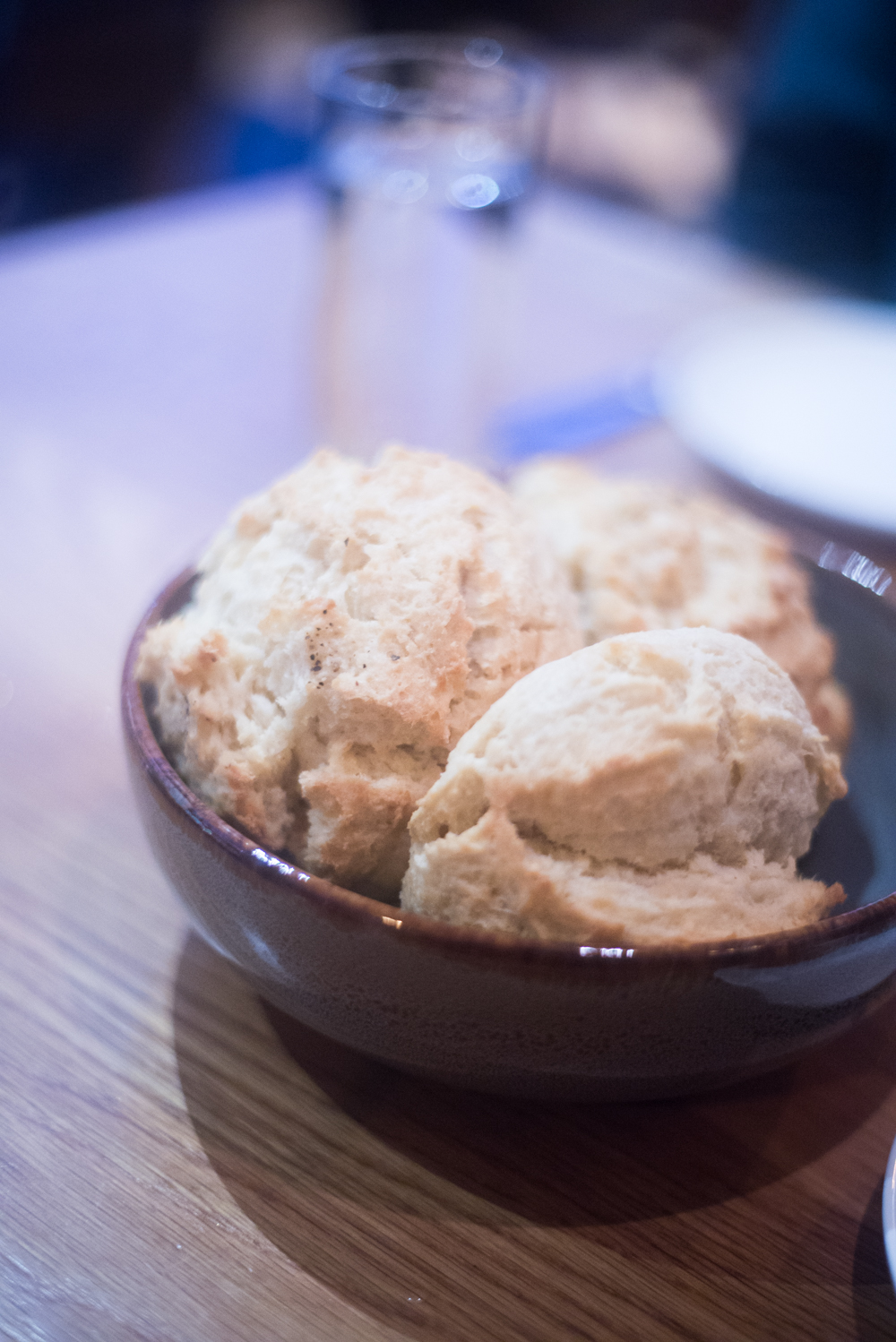 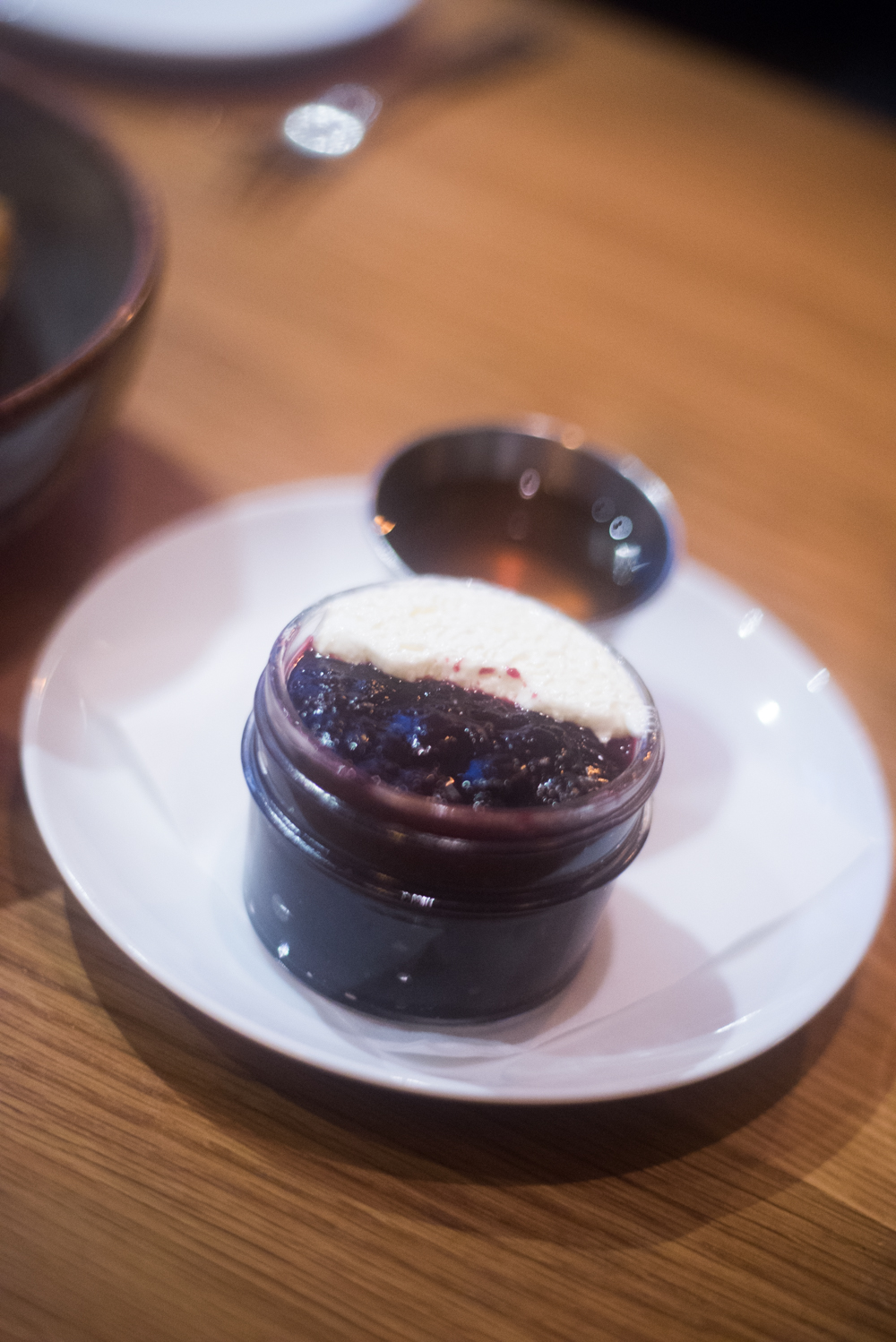 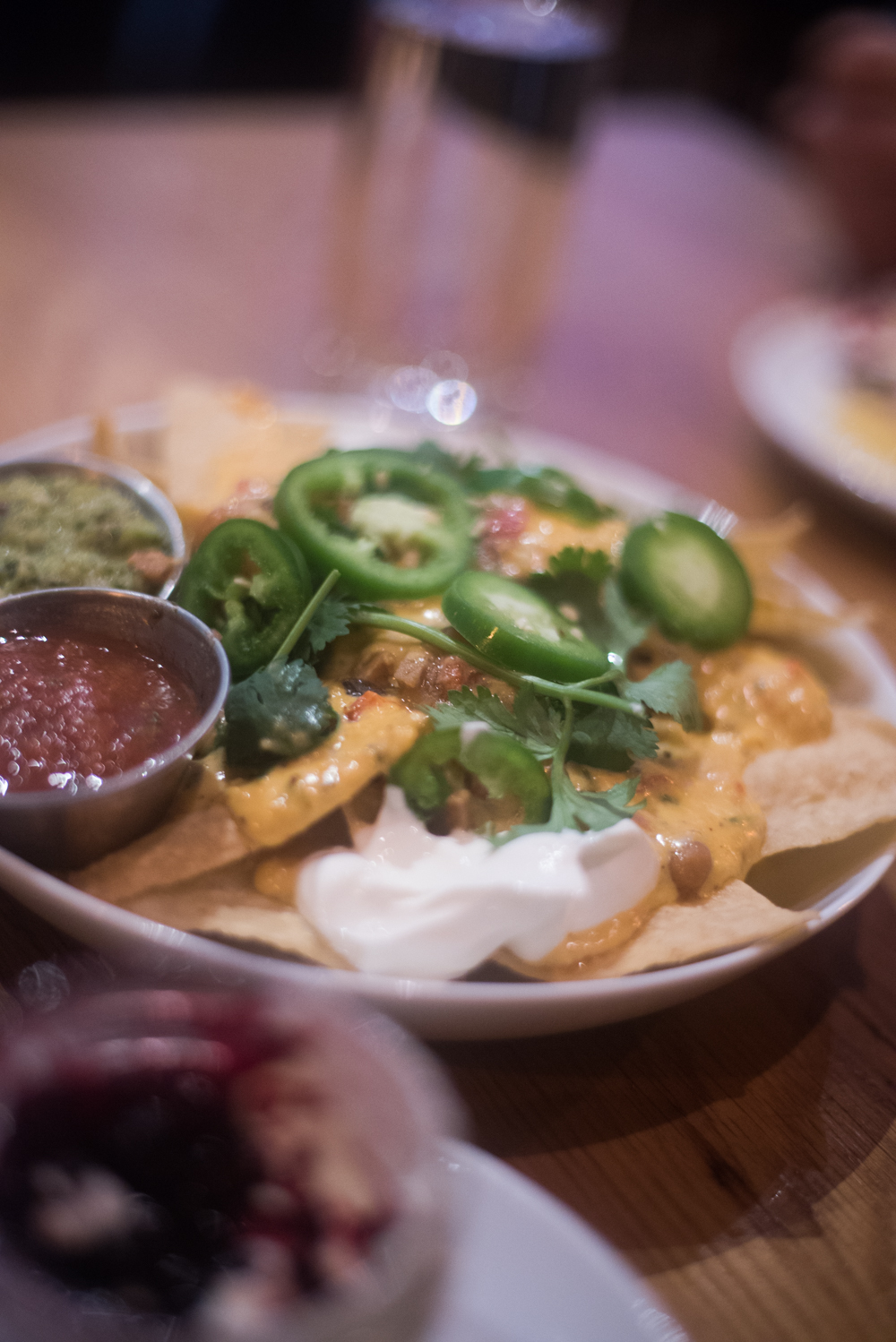 Katie tried the Honey Dusted Fried Chicken, which is described as partially crusted with ‘bee dust.’ I believe bee dust is crystallized honey, and its coating did taste sweet to me. The fried chicken was juicy and flavorful on the inside, and perfectly crispy on the outside. It also had a slight “kick” to it (nothing too crazy though). Katie also got a side of cheesy potato gratin. She might get something different next time, but it was quite tasty. 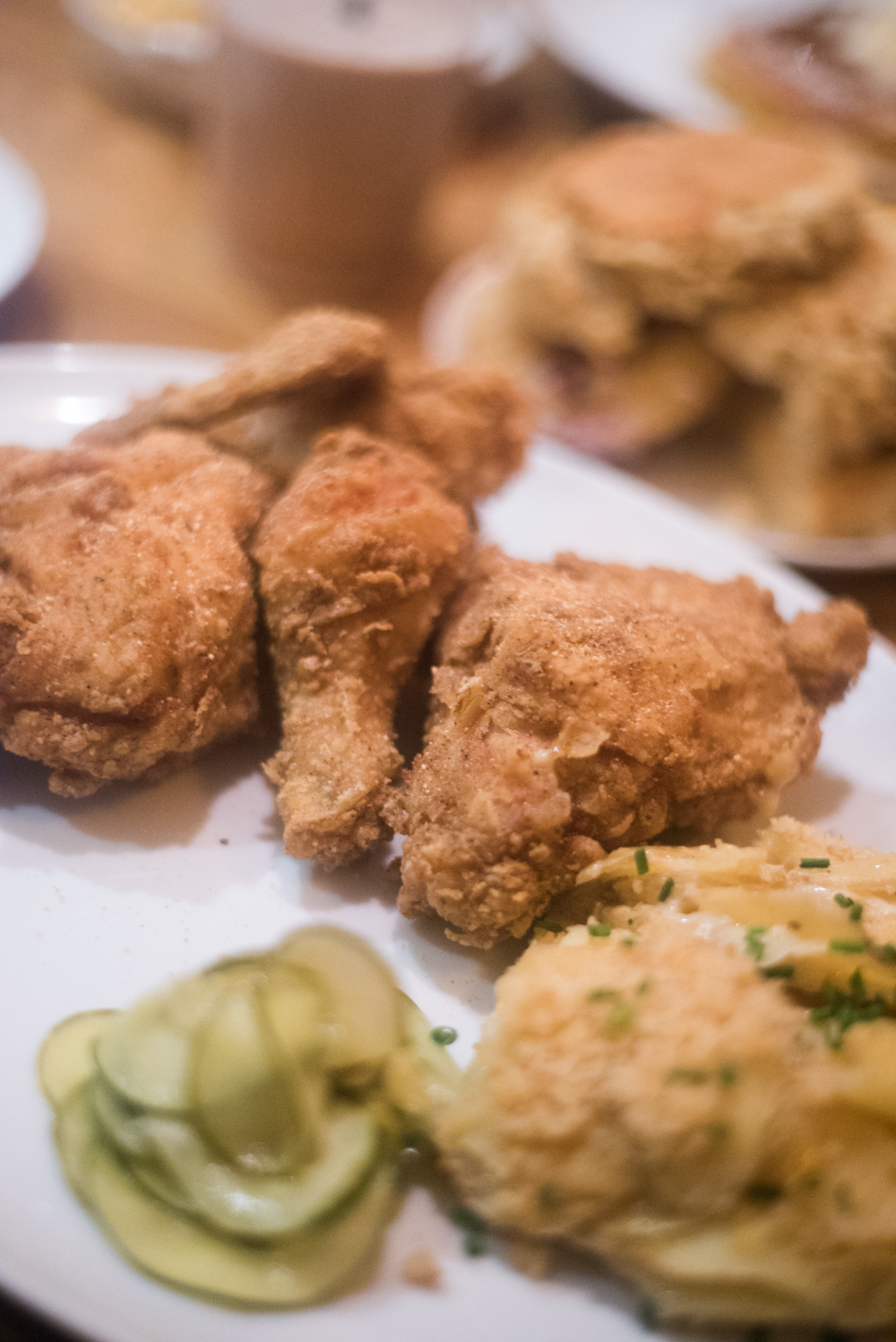 I tried the Pimento and Fried Pickle Burger, which I believe used the same Pimento cheese sauce that was on the nachos. The fried pickles added a slight crisp, as well as a nice tang. My burger came with a little cup of collard greens. The collard greens were seasoned well, and I enjoyed the bits of bacon mixed in.

Oliver had the grilled cheese kids meal. Even his kid’s meal sandwich was made with high-quality bread, and it was grilled to perfection. 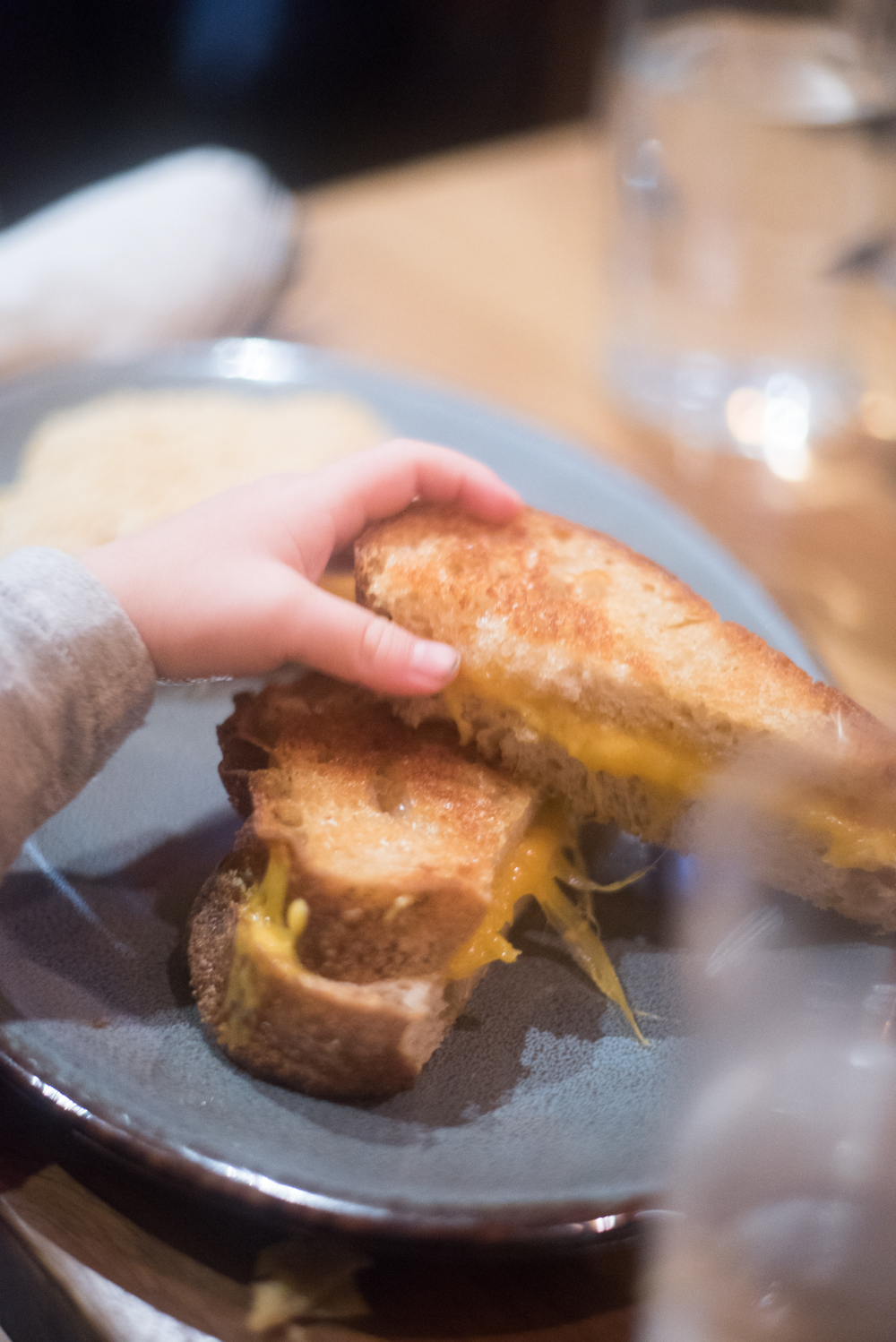 Jack had the Sweet Potato Pancake kids meal. In the past, he hasn’t been a fan of a lot of sweet potato dishes that I have given him. However, he really liked his pancakes – he even said it was one of the best things he’s ever eaten. I thought maybe it was because they didn’t have very much sweet potato flavor, yet, when I tried the pancakes, they had a very clear sweet potato flavor. 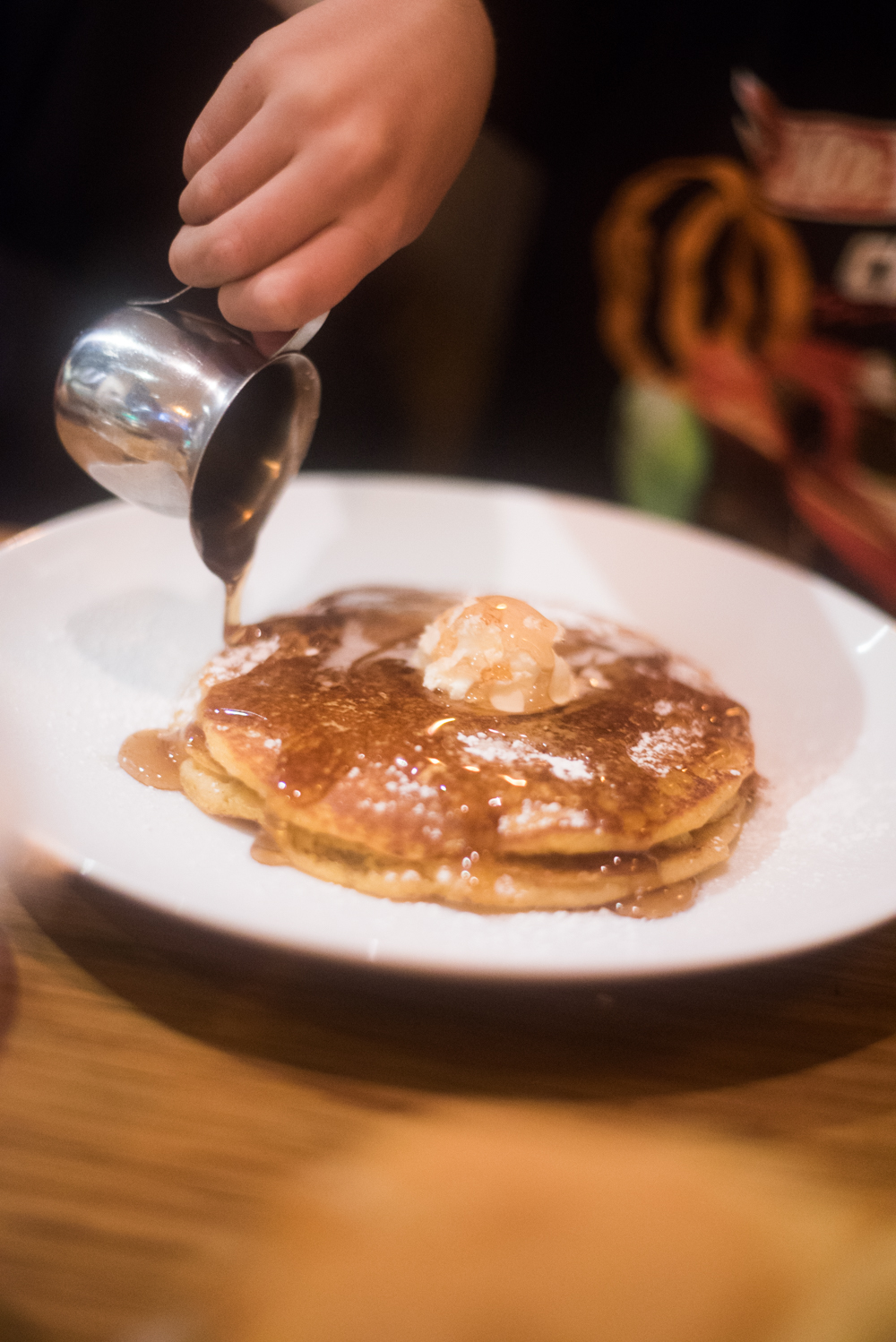 At this point we were rather full and satisfied. However, we did want to try a dessert so we could give a more thorough review – oh, the sacrifices we make for our readers! 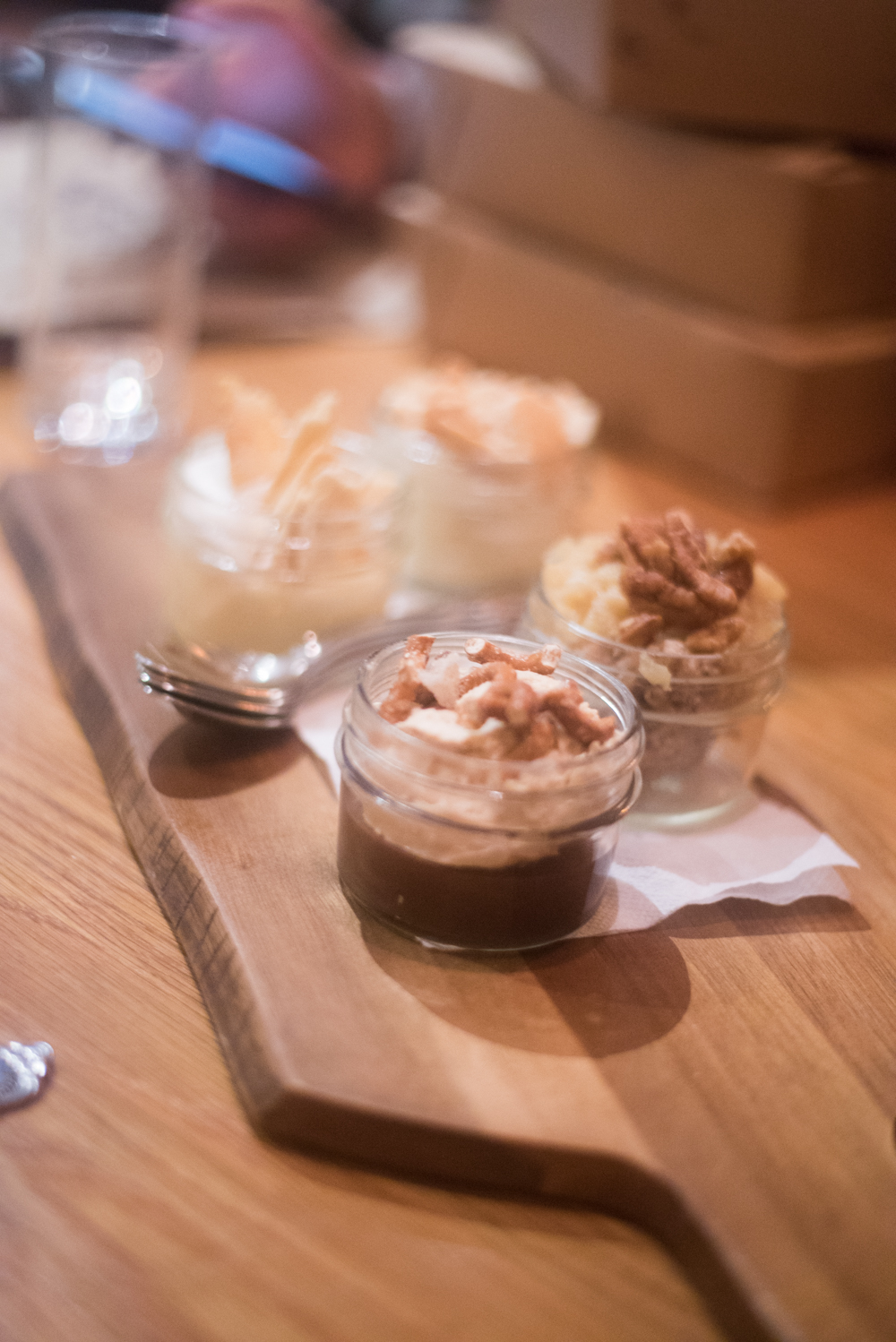 They have a banana pudding flavor. Another flavor of peanut butter mousse, chocolate ganache, and salted pretzel crumbles. A surprisingly delicious flavor was their hummingbird cake with cream cheese frosting and spiced pecans. The last flavor was the Atlantic Beach lemon custard with whipped cream. All of the deserts were very flavorful, decadent, and delicious.

As you can see, we ordered a lot of food, and we had a few delicious leftovers to take home. They portions ranged from sufficient to plentiful. I never felt like I was worried I would leave hungry. I highly recommend this restaurant.

It is a very good Southern restaurant, and just a very good restaurant in general. All of the food was made well, and with quality ingredients. I don’t think I’ve ever been to a restaurant with a menu, and execution of said menu, like Tupelo Honey.

We don’t normally like to make the trek Downtown. We generally try to avoid the traffic and parking fees. However, for this level of foo,d we’ll definitely make the extra effort in the future. We might try taking the light rail, because it basically takes you right there.

Tupelo Honey is located in Downtown Denver right next to Union Station. One side of the restaurant is largely glass, so the restaurant has a nice open, urban feel. We parked at the Whole foods across the street, and if you buy anything you can get your parking validated. We were able to park for free because we bought some ketchup.

In my experience parking can be very expensive downtown, or you could take public transportation to Union station. I also felt like getting to the restaurant from the Denver suburbs was relatively easy for early dinner because commuter traffic generally goes away from downtown instead of towards it.

The restaurant was a little loud for my personal tastes, but it was also a result of a good amount of people being attracted to delicious food. I wouldn’t say the restaurant is cheap, but you get what you pay for. I really don’t know how the price compares to other quality downtown restaurants, but I would imagine it is about average when you compare like for like.

Apparently, the menu changes seasonally, so I guess I can’t really promise if anything we tried will be on the menu. However, I imagine most of it would be.