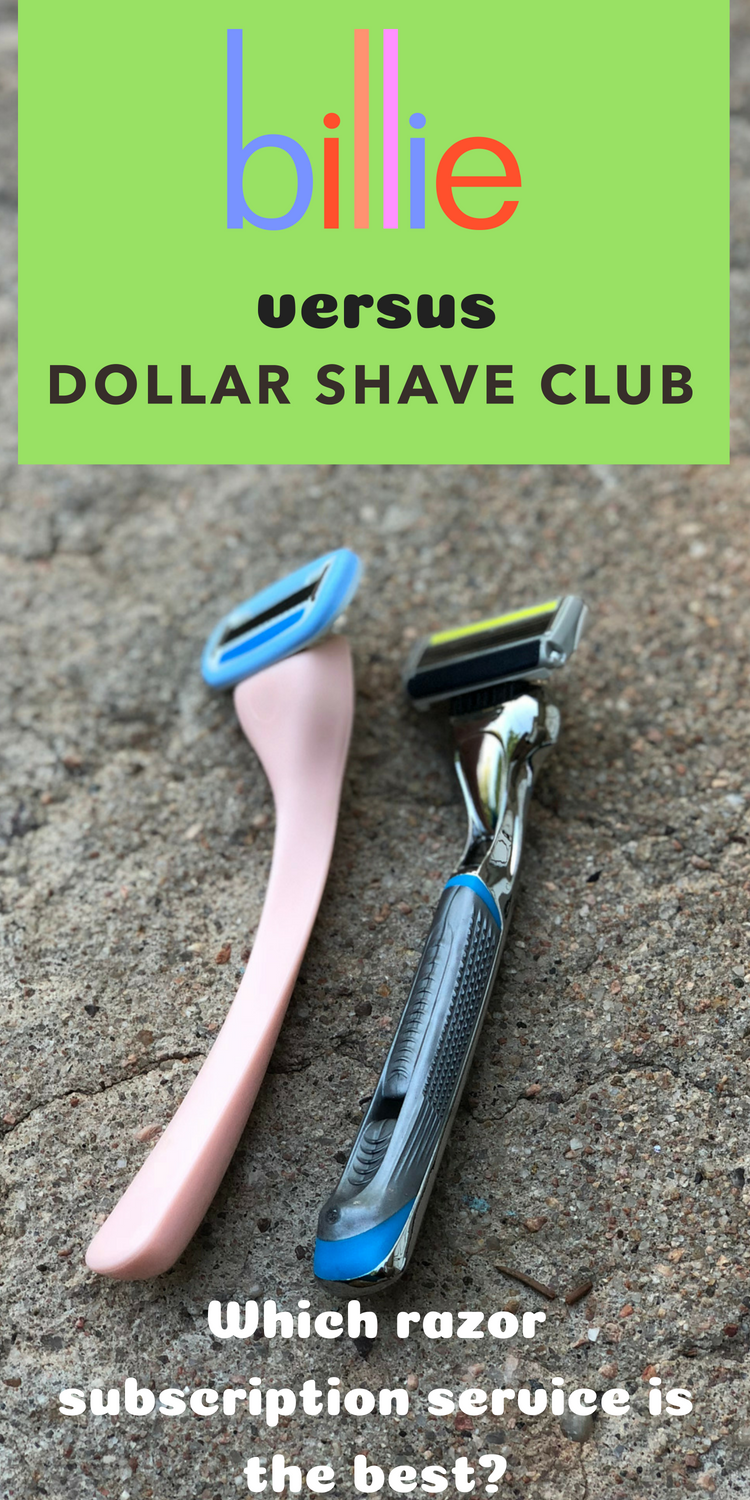 Shaving is an ineveitable part of life for most women – but it can be made easier with a razor subscription service! Here is a side by side comparison of two popular ones – Billie versus Dollar Shave Club! 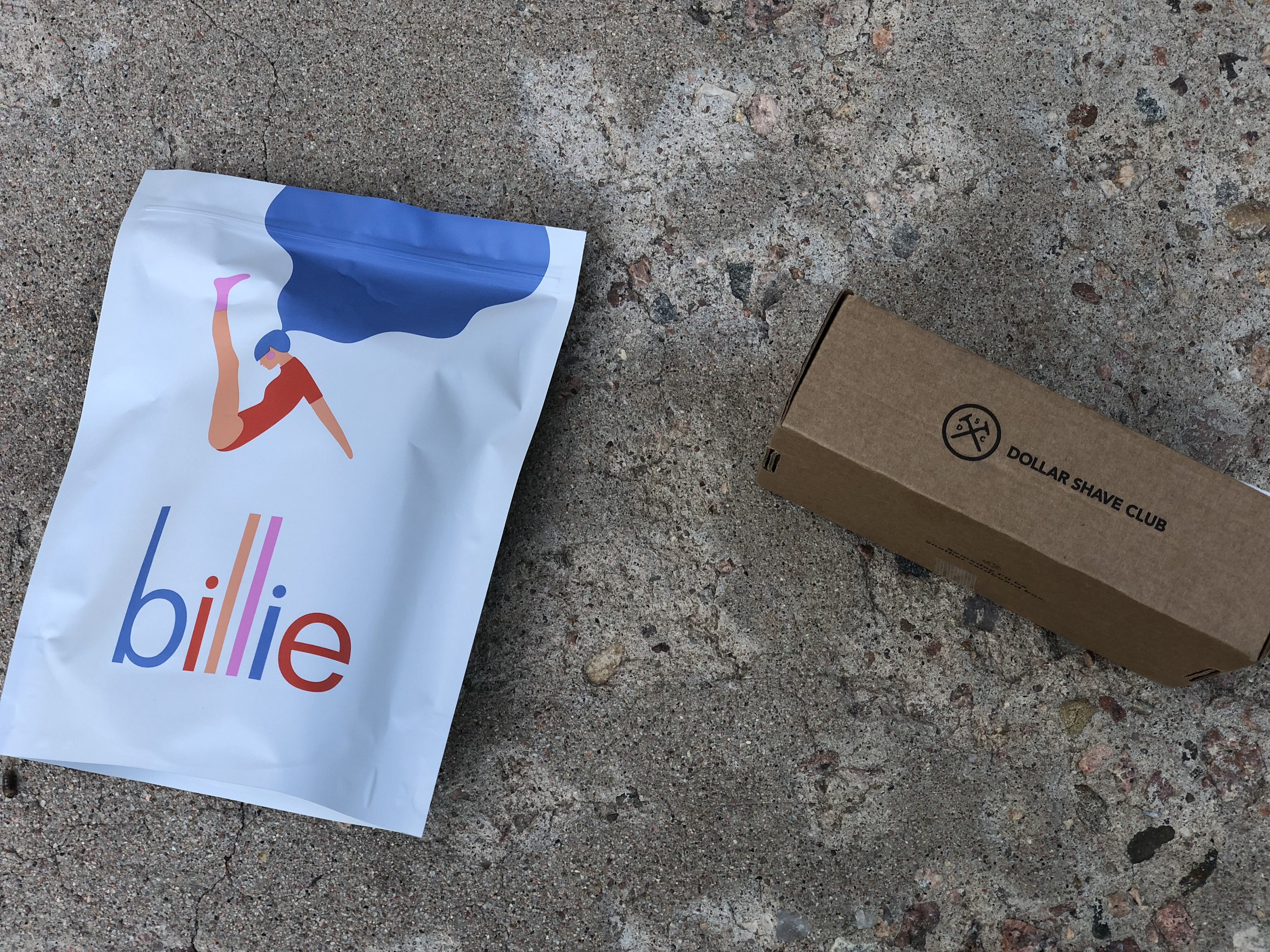 Subscription boxes are all the rage right now.

We’ve talked about our favorite subscription boxes in the past….ones for pregnant moms…ones for babies…ones for beauty aficionados and ones for snack addicts.

And today, I’m going to talk about another kind of a subscription box:

I’ve known about the Dollar Shave Club for several years now, but I just heard about Billie the other day when they showed up as an ad in my Facebook feed (good job targeting those ads, Billie. It’s not easy to do!).

I was really intrigued by what Billie was offering, so I decided to order a kit. Since I know that Dollar Shave Club is popular, I figured it was a good time to try them out as well

This post is NOT sponsored in any way. My referral links are used, but my experience is my own. You are welcome to have your own opinion, but if it’s different than my own, that doesn’t mean I’m being paid. I have updated this post several times to make this comparison similar.

When placing my orders, I simply ordered what was offered when I went through the prompts on each website. That is how I ordered the products and subscriptions described below.

The Cost and Subscription

Both Billie and Dollar Shave Club offer different variations on their subscriptions. When I signed up with Billie, it asked how often I shave, and it calculated a subscription-based off of that. 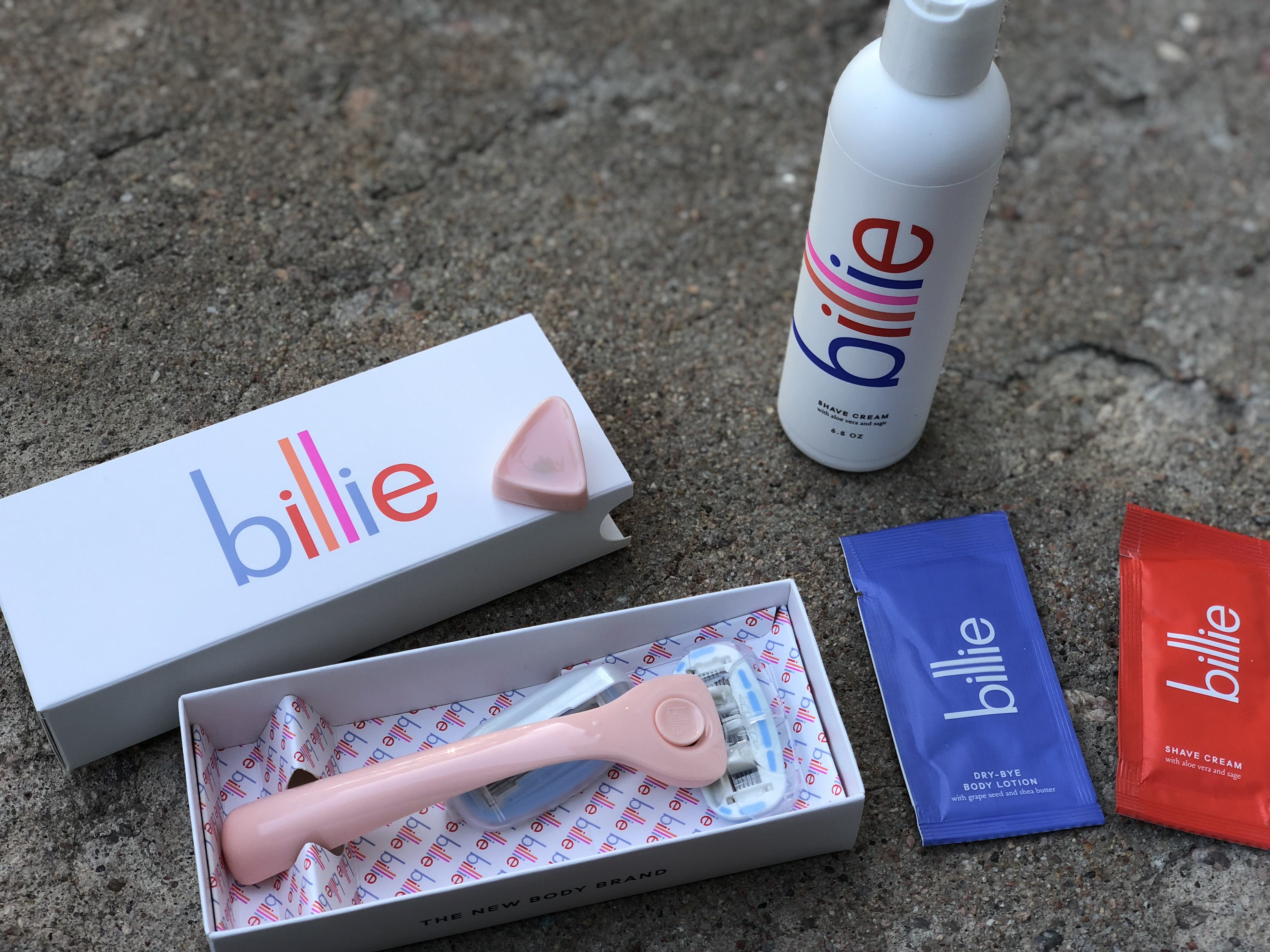 Billie is $9 per month that you receive the subscription – so for me, I get a new package every three months with new cartridges. In your first package, you will receive:

And each shipment (regardless of how often it is) will have four razor replacement cartridges in it. At $9 per shipment, I think that’s a pretty great deal. They also offer a shaving cream (more on that in a bit), a body wash, and body lotion, which you can add for an additional cost.

How often you shave will determine how often you need to order. Billie recommends changing the blade every seven shaves.

But based on ordering once every three months, that amounts to be $3 a month.

I ordered a shaving cream with mine, so that is why that was included with my subscription. But that is totally optional. 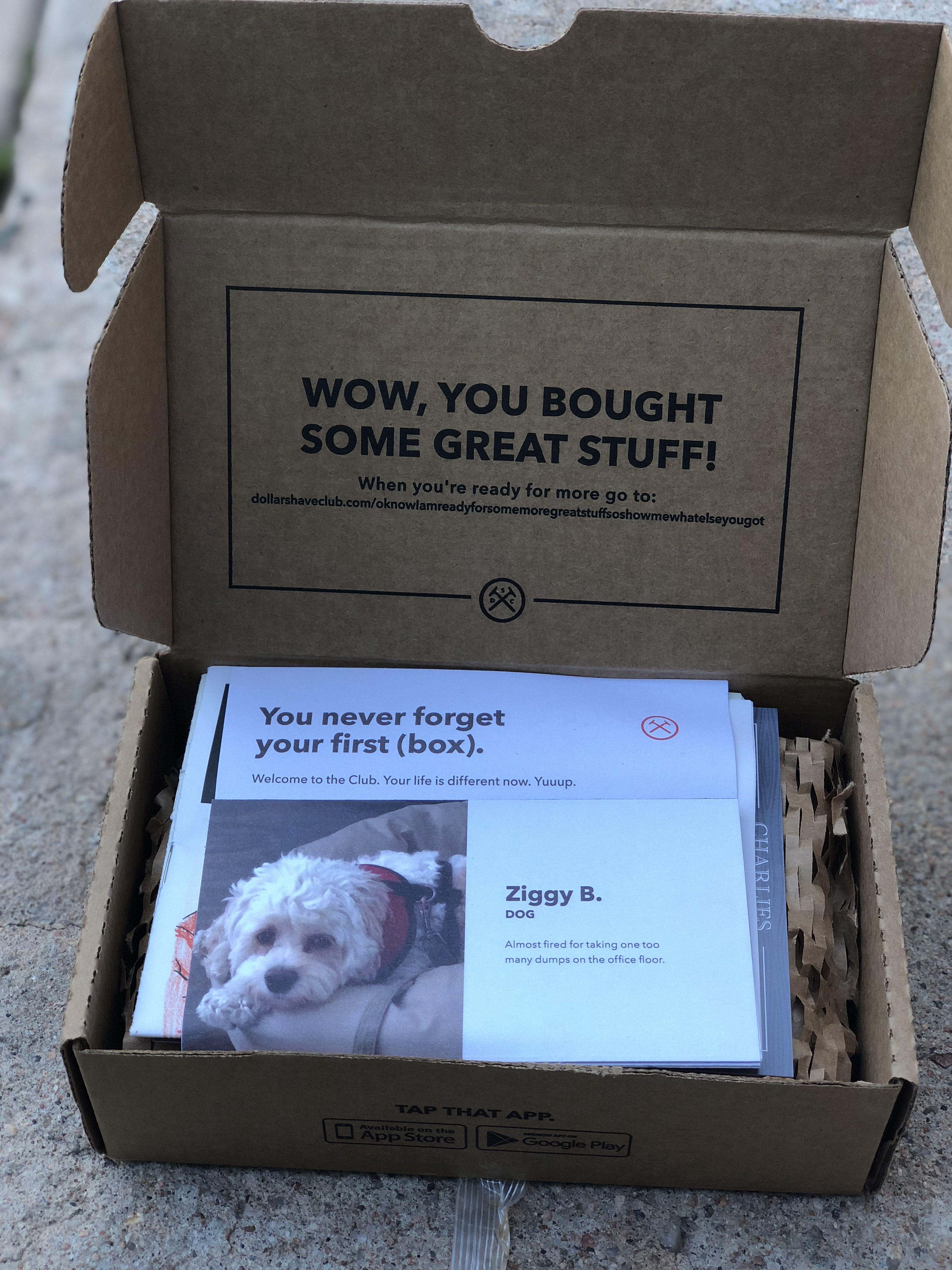 However, each time after that, it will be $24.70 to get eight replacement cartridges and shaving butter. You can remove the shave butter to make it less, and it ends up being about $16.

Here are a couple pricing scenarios:

Here is a screenshot of the exact plan I am looking at that quotes the $24.70 above since I have been getting comments saying I wasn’t giving accurate numbers 🙂 This is what was given to me by default. 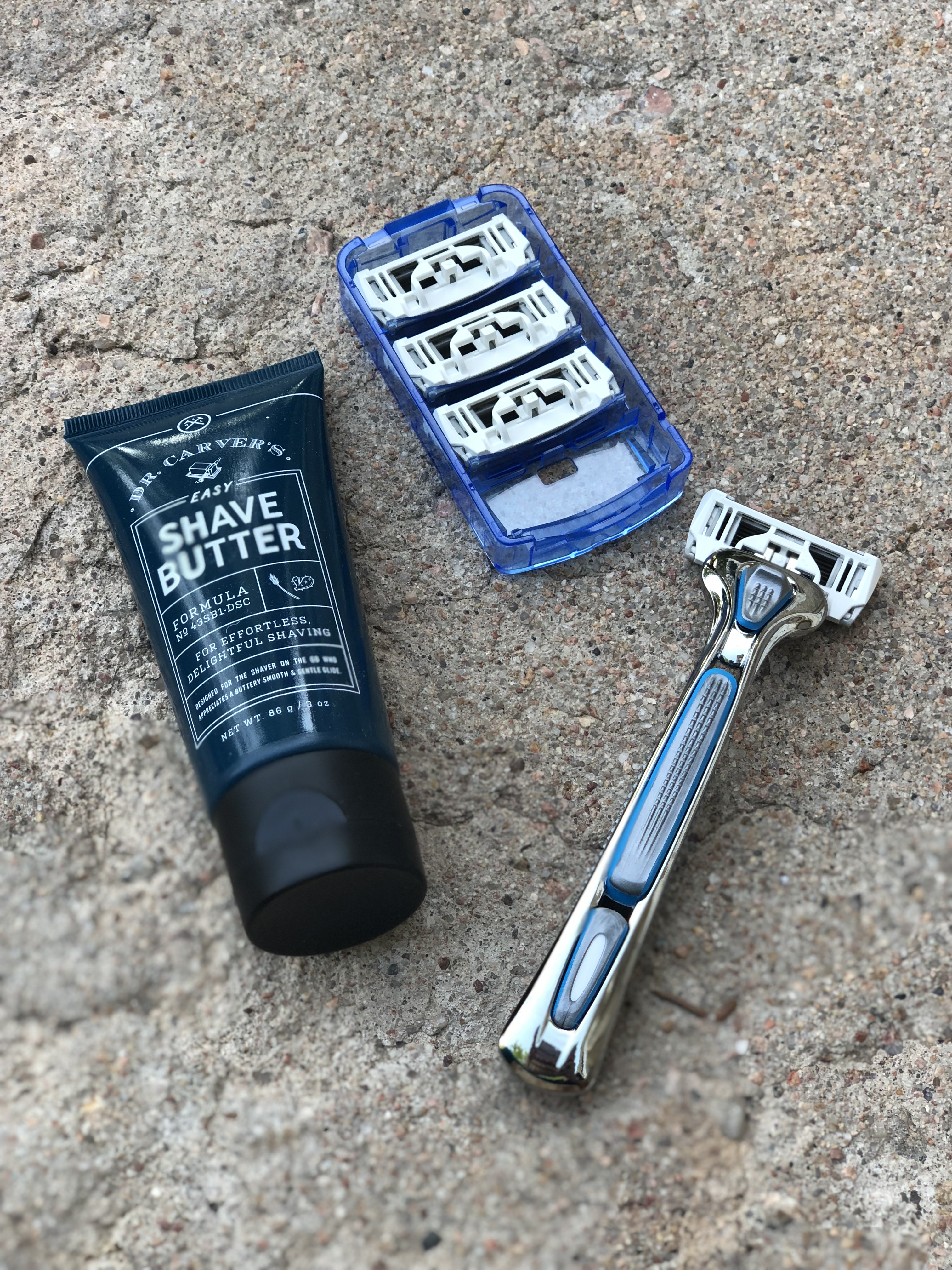 It’s hard to compare the pricing as apples to apples, since they include different amounts of razors and have different recommended switch out periods. A lot of this will depend on how frequently you shave.

Neither of these companies requires a contract, and you can cancel at any time – it’s very easy to do through the website.

My main gripe with Billie was that it didn’t create me an account when I signed up for my subscription. I accidentally did two subscriptions, which was a tad bit annoying! But as soon as I created an account, both of them were connected to it, and I was easily able to cancel one 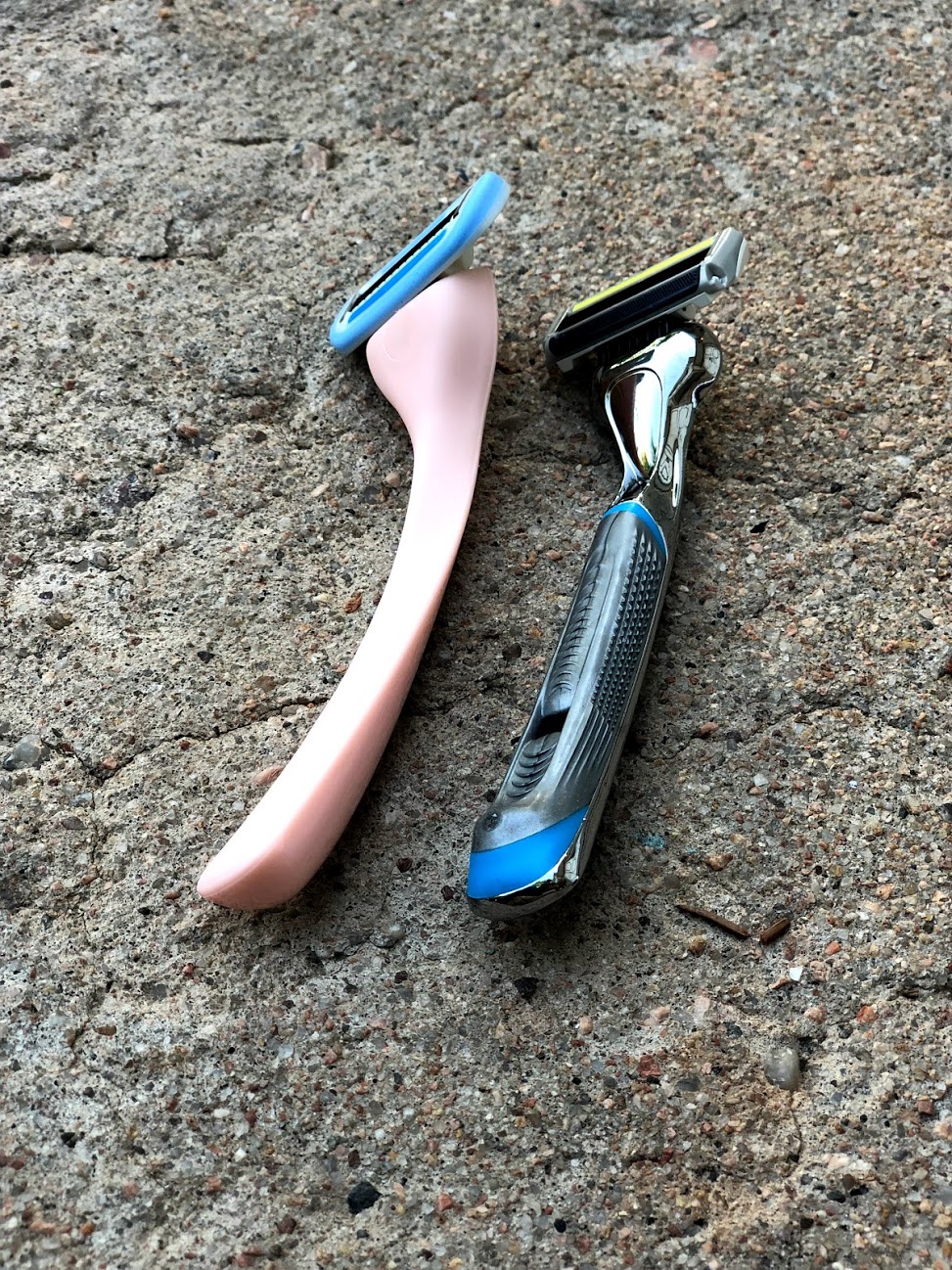 The razors from both Billie and Dollar Shave Club have some similarities – but they are definitely very different overall. 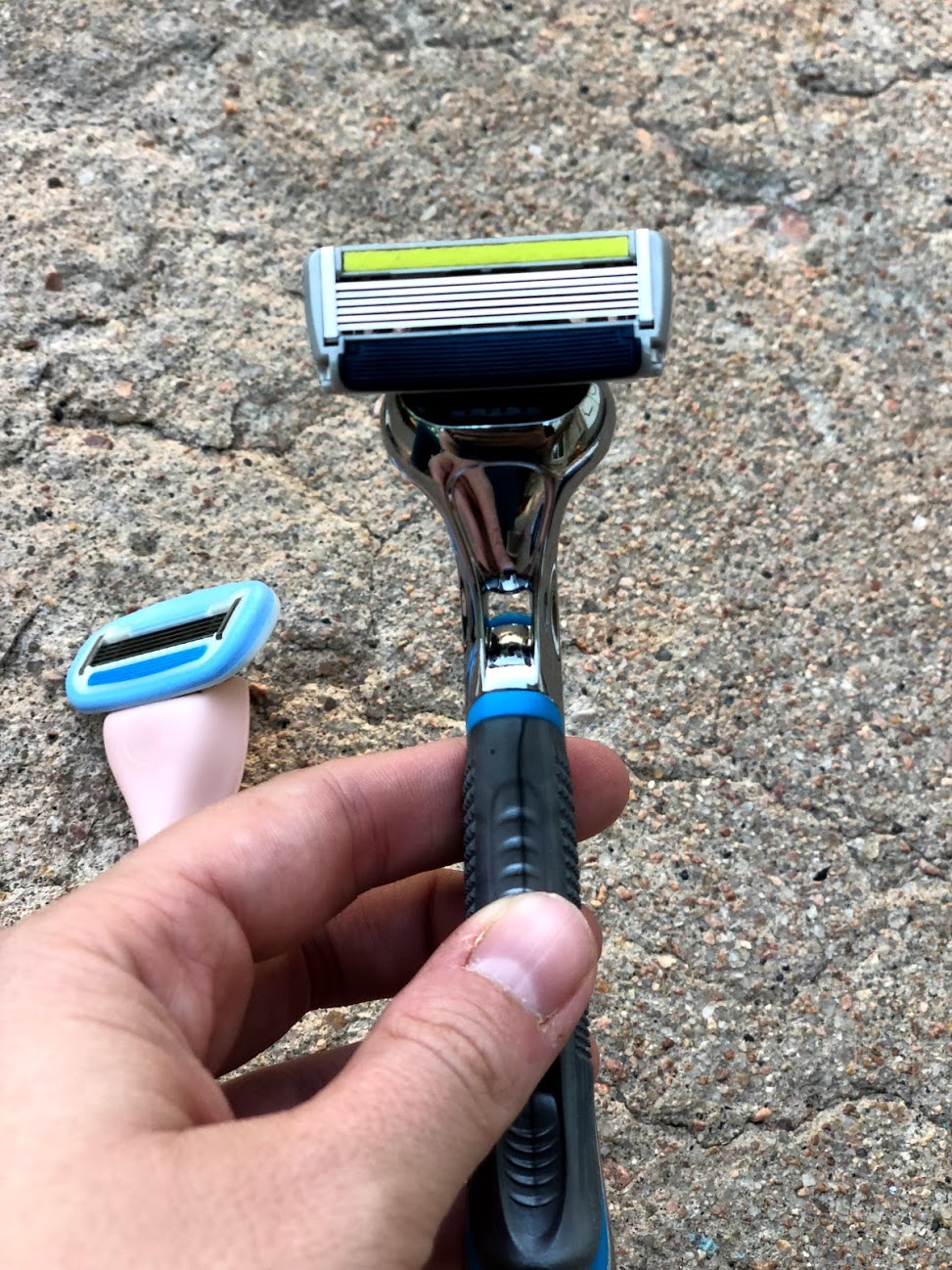 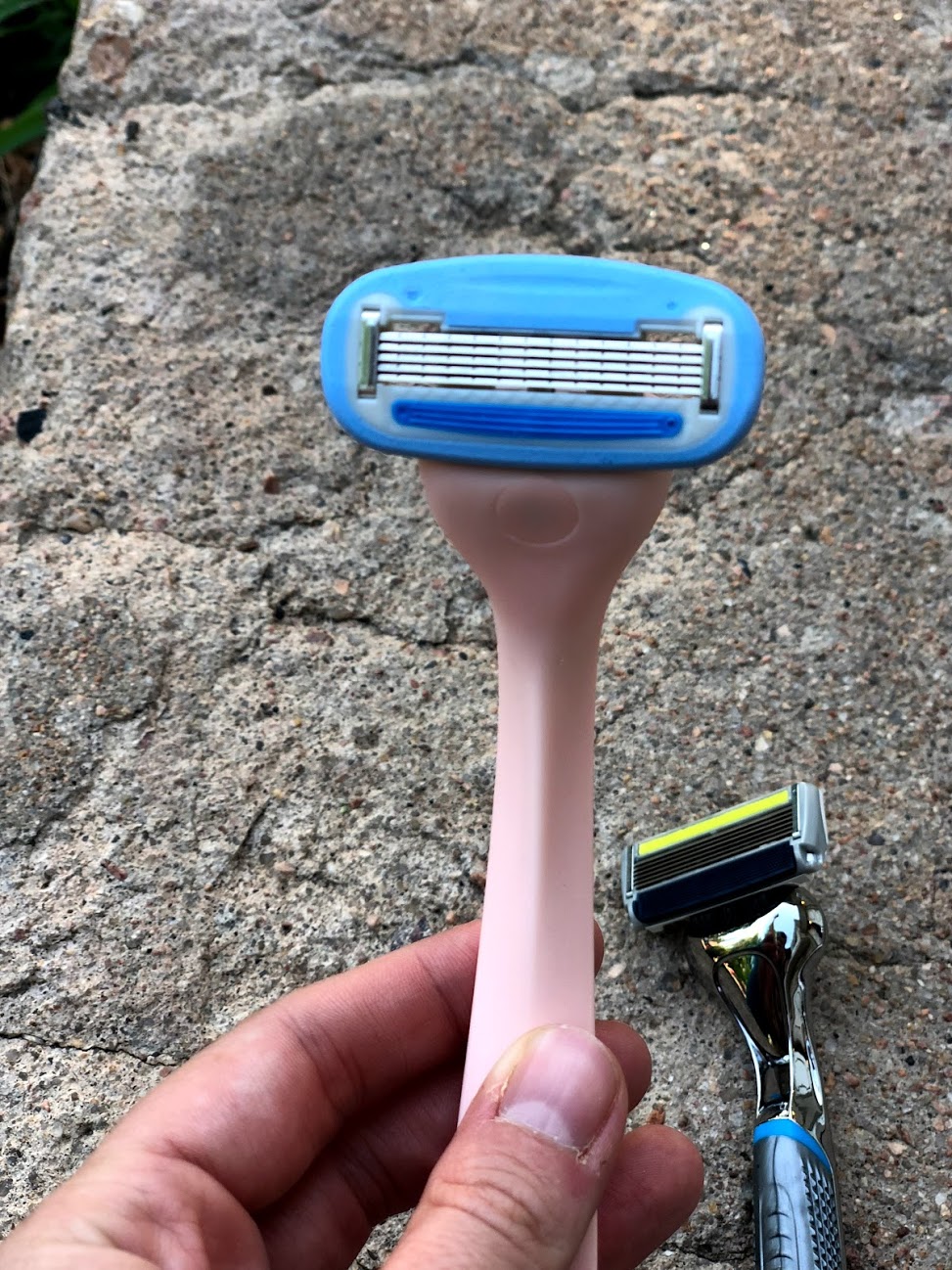 **UPDATE – After just a couple of weeks, my razor from Billie started to rust all over the blades. This has definitely been concerning to me, and since then, I have switched to primarily using my DSC razor for the time being, which I have liked more than more I use it. I still prefer the feel of the Billie. Both razors were stored the same way, and the DSC one has not rusted**

**UPDATE #2 – Apparently I wasn’t the only one who had issues with the rusting at Billie. They recently updated their blades to be charcoal based, which supposedly helps with rusting. I am getting these new blades soon, and I will update as soon as I can!** 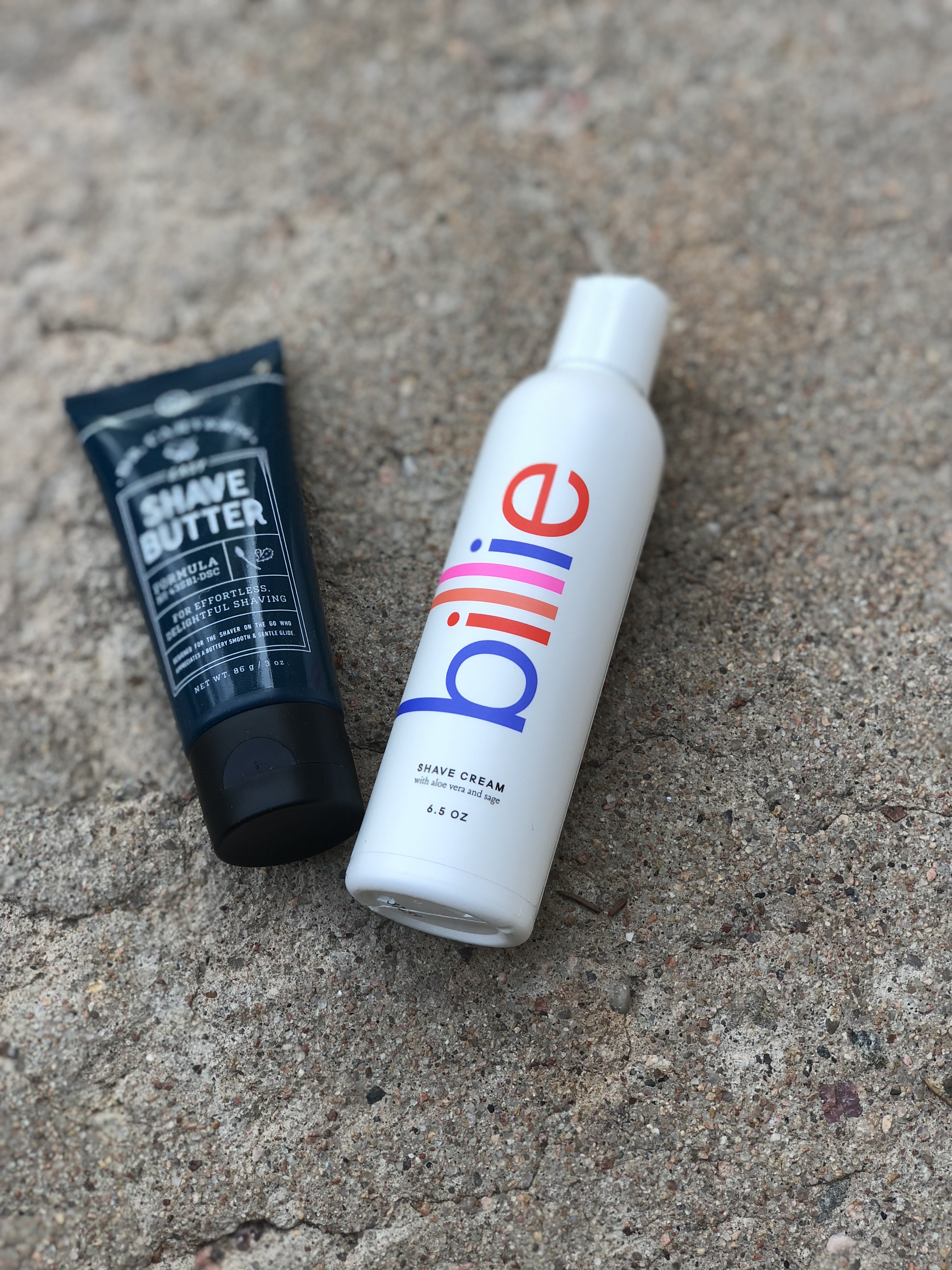 The Dollar Shave Club includes a travel-sized sample of their shave cream with their $5 starter pack. Billie doesn’t include shave cream in their $9 subscription, so it’s about $8 to add it on. They do include a free single use sample though with your first order.

However, I still wanted to compare the two. I’ll admit that I don’t always use shaving cream because I’m lazy…but it definitely makes a difference when I do 🙂 I know most women do, though, so hopefully this will help you decide which one you will want to use.

Dollar Shave Club – this shaving cream definitely felt more like an oil. I didn’t feel like it lathered up at all, and it seemed to rinse away pretty quickly. However, even though it didn’t lather up, it did seem to get the job done, and it helped achieve a more smooth shave.

The main issue I had with it was the smell – I did NOT like it at all. It smells a bit too “masculine” for me – a bit like a cologne or a men’s aftershave. This may just be a personal preference – I tend to prefer more floral or fruity scents. I just didn’t like it.

Billie – This shaving cream definitely lathered up, which I do like, and it was more creamy than oily. I don’t know what it is, but I just feel more confident when things lather up. Haha. I absolutely loved the smell! Very pleasant, yet not overpowering.

I feel like they both did about the same job assisting in the shaving job. I think it really just comes down to the smell and texture. 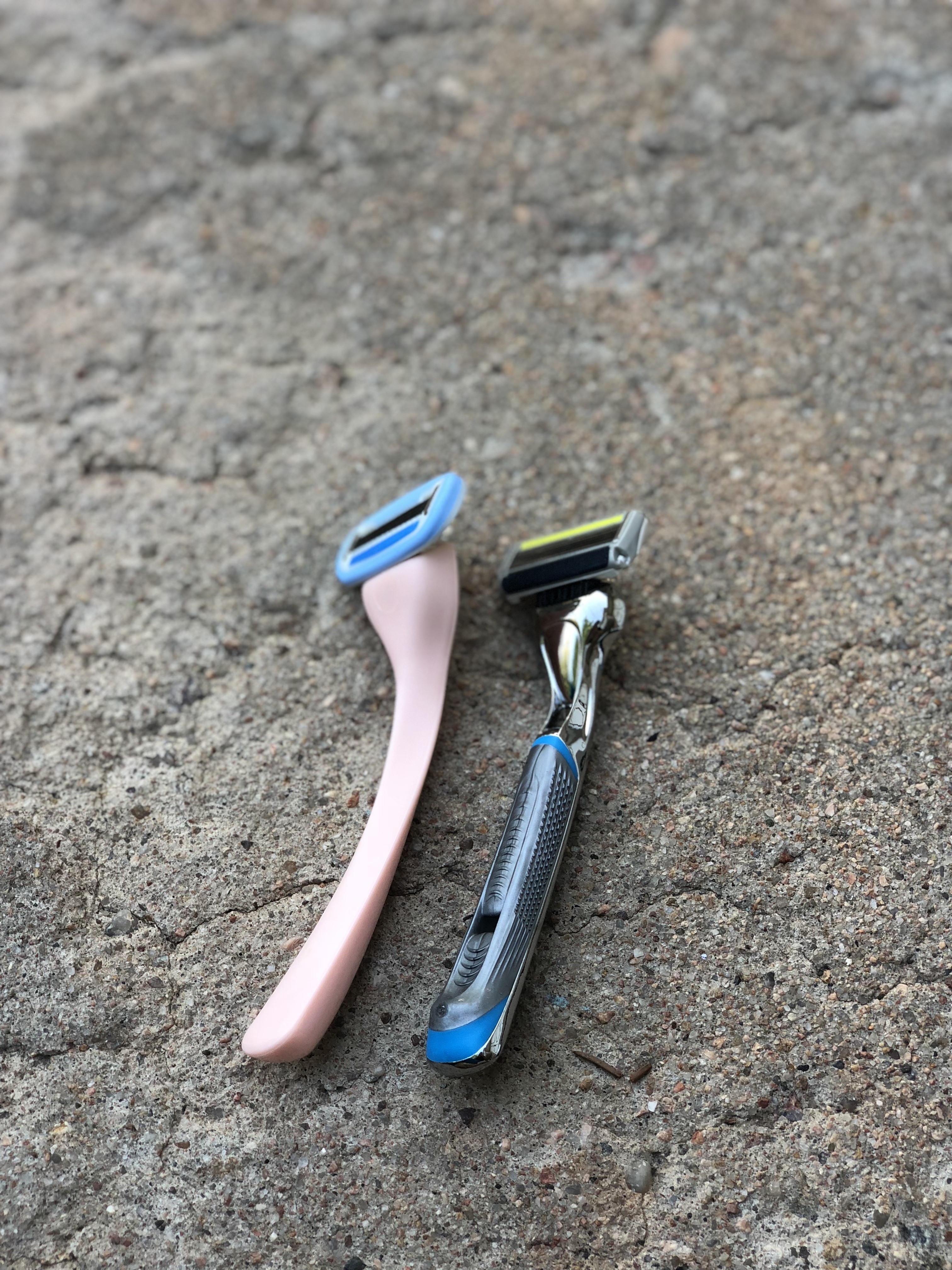 When it comes to the experience, I felt like they were both pretty similar. The Dollar Shave Club razor seemed to just *barely* have the edge on the closeness of the shave. I felt like the DSC razor was better for smaller areas – like around my knees – and I felt like on larger areas – like my calves and thigh – I ended up with a little bit of razor burn.

The Billie razor seemed to be the opposite – good for larger areas, but my knees got some razor burn.

A few days after shaving, I compared hair regrowth, and I would say that the leg and armpit that I used the DSC on seems to have less growth (so that lines up with getting a little bit of a closer shave).

I shaved with both razors at the same time, just to compare the feeling more easily. I felt like the DSC razor just felt kind of rough. I can’t really explain it – but I didn’t like the feeling at all. With Billie, I could barely even feel the razor as I used it, which is what I like. In the end, that little test is why I decided that Billie was my favorite.

Billie or DSC – What Should You Choose?

I think it’s pretty obvious that Billie is the company I personally liked the most – except for the rusting issue. With that said, I think they both offer a good product – it just depends on what you want.

Billie is designed specifically for women – the razors are designed with a woman’s unique shaving needs in mind, and I definitely felt like the razor worked much better with me than Dollar Shave Club.

Dollar Shave Club is supposed to be unisex, and it is. I was able to use the razor without any major issues. However, at the end of the day, I really kind of felt like I was shaving with a man’s razor. I felt like the shave cream was more like a male after-shave as well.

Like I said above, I did feel like the DSC did provide a closer shave, and I didn’t have to shave as frequently. But for the most part, I think that Billie offers a more comfortable shave and better value.

If you are a man, though, I think I would definitely choose DSC 🙂

All in all, though, I would recommend you try both out to see what YOU like the most.

Curious about another toiletry subscription service – be sure to read our review about the Dollar Maxi Pad Club!