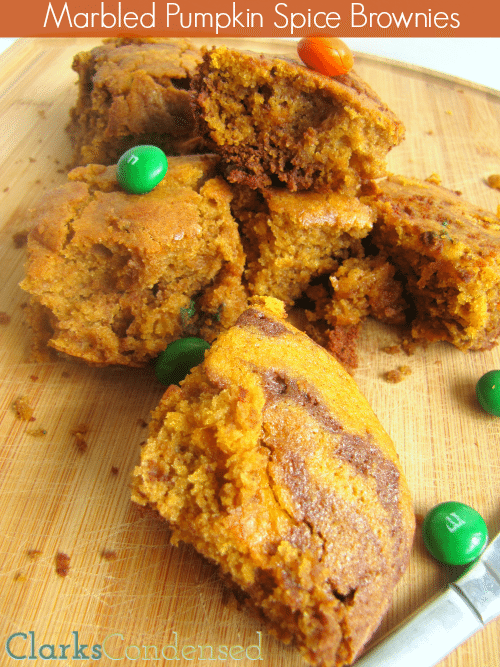 Last Sunday, I gave Forrest a couple different options for dessert, and he chose brownies. Since I had two half-used cans of pumpkin in the fridge, and a bag of Pumpkin Spice M&MS, I thought I’d make pumpkin brownies — ’tis the season, right? Most of the recipes I found had cream cheese in them, and we didn’t have any of that. So I was excited when I stumbled on to this tasty sounding pumpkin brownie recipe. I adapted it a little bit, cutting down the sugar and butter a tad bit, and using Pumpkin Spice M&M (exclusively found at Target stores) instead of chocolate chips. The result? 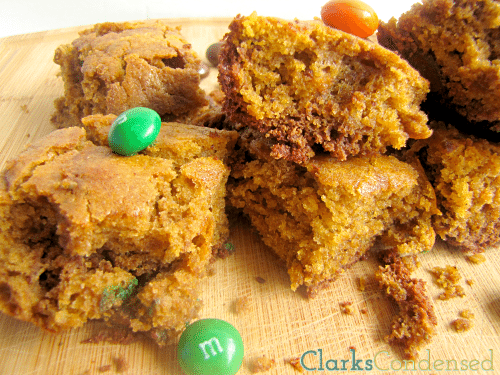 Light and fluffy brownies. To be honest, they aren’t gooey and uber-chocolately, like traditional brownies, but they still had the delicate chocolate flavor that I love. The M&Ms added even more chocolate, and the pumpkin really played well with all of it. They were super addicting too…which may or may not have been a good thing. If you can’t find the M&Ms, you can use semi-sweet chocolate chips instead…but I think it’s worth the search!
Continue to Content