Sign Up!
Home » VidAngel is Back – What to Know VidAngel’s New Filtering Service

VidAngel is back! Here is what we know about VidAngel’s new streaming plans!

I remember when Forrest first told me about this new company that was going to be offering filtered movies for just $1.

It sounded crazy. But amazing.

And thus began our interest and love of VidAngel.

As soon as we watched our first movie through them, we believed in them.

We sometimes joke that we personally funded them with how many movies we watched.

It’s the reason why we never rented another RedBox movie again (until last week when we got a free one with T-Mobile Tuesday…and we ended up paying $11 for two movies because we kept forgetting to return it!).

Even when a lawsuit was looming over their heads, we chose to invest in them because we believe in what they stand for – allowing people to filter what content is shown in their homes.

We believed that filtering is the future for families like ours – and since they have over one million customers, there are a lot of us.

I’ve watched with eager anticipation as they’ve entered into a David and Goliath battle with studios such as Disney. We’ve missed watching filtered movies, and to be honest, since they were ordered to go offline…we haven’t watched many.

So when I heard they were making a big announcement (which coincided with their recent court appearance,) I knew it was going to be big.

DId I secretly hope they were going to announce the studios have dropped their suit, and they could resume as normal? Of course.

Obviously, that was not the announcement – but I’m pretty thrilled with what they did announce. I thought I’d share what I know about VidAngel’s new filtering options, so you can decide if it’s a good option for your family. As of right now, I haven’t been able to try it out yet (their website is totally overloaded), but I will definitely update this post with my assessment once I get more information.

What was VidAngel’s Big Announcement?

Basically, VidAngel is now working with streaming companies such as Netflix, Amazon, and, soon, Vudu. You can filter movies that are streamed through these services.

So, movies and TV shows that are available on these services can now be filtered through VidAngel! According to their legal counsel have said that the new services resolves the issues brought up by the studios (who “claim” that they aren’t against filtering…you know, despite denying any attempt VidAngel has made to work with them).

“It removes all the economic harms that Disney claimed it was suffering as a result of our prior service,” Quinto says. “There would be no economic reason for the streaming services to complain. VidAngel would be driving more traffic to them.” (source)

How Much Does VidAngel Cost?

Can I still rent movies for $1?

Sadly, no. As of right now, this model is a thing of the past. I sure miss it though – we loved all the $1 filtered movies we watched!

Do I have to have Netflix and Amazon?

Yes, you do. In order to take advantage of the VidAngel filtering services, you need to have a monthly subscription to Netflix and/or an Amazon Prime account. You can get an 30 Day Amazon Prime free trial here to see if it’s worth your time.

How does VidAngel’s New Service Work?

Once you signup, you will be asked to connect to your current streaming services. As of right now, those would be Amazon, HBO, and Netflix.

The website is still a bit sluggish, but from what I can tell, anything is available for filtering will show up on the VidAngel app or website, and you can watch it from there! Here is a screen shot of what I am seeing right now! 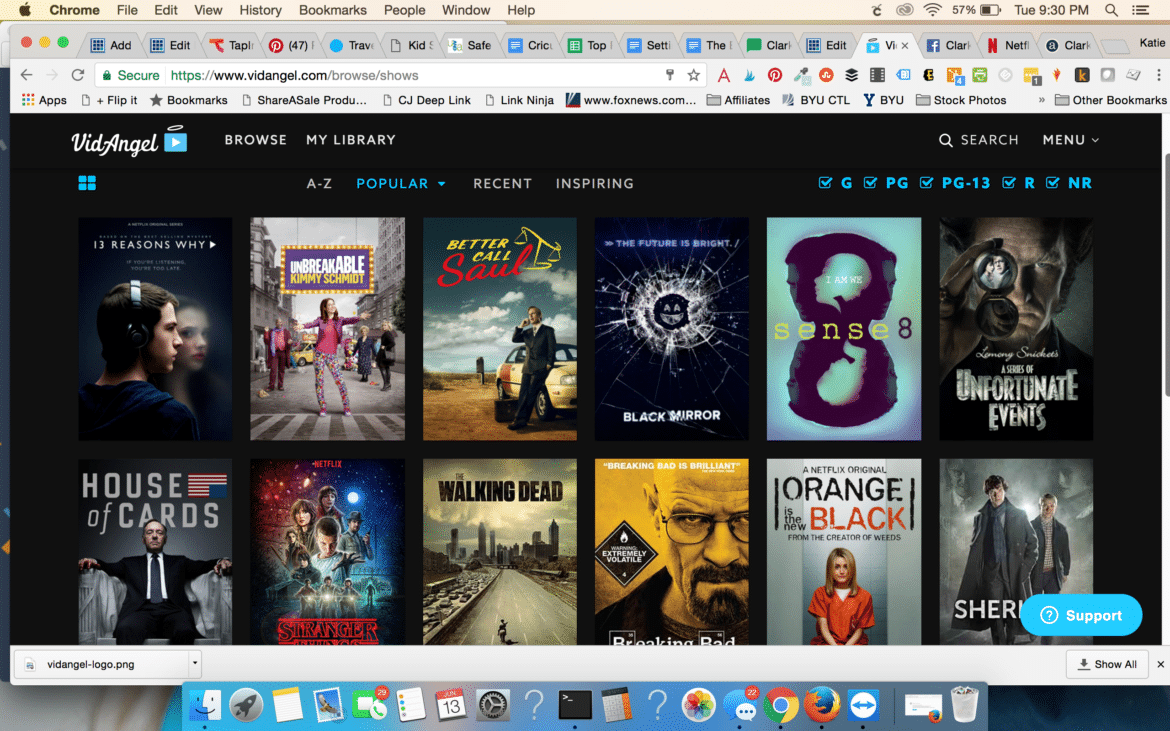 What happens to my old credits?

From what I’ve read, you can apply these to your new account. Also, if you were a previous member, you can sign up for the free 30 day trial. AWESOME!

Are all movies and shows on Netflix and Amazon available for filtering right now?

This is what I’m trying to find out. I have a feeling that only select movies and TV shows are available. From what I’ve read, there is a huge ongoing effort to filter things as quickly as possible (and obviously, anything filtered in the past that are available through these services will be available for filtering).

I did find this article to explain how it works pretty well. You will do everything through the VidAngel app, which essentially becomes the cloud for all your streaming services!

So is this as amazing as it used to be? Nah. But it’s definitely an awesome way to be able to choose what kind of content my family is watching. I certainly consider this a big win for families and individuals everywhere.

We always knew there was something special about this company 😉

and no, VidAngel did not ask us to write this. We just really, really love the company, and I was so excited to hear about this new development.