Sign Up!
Home » Motherhood: What I’ve learned five years in

“God gives you what you need.” 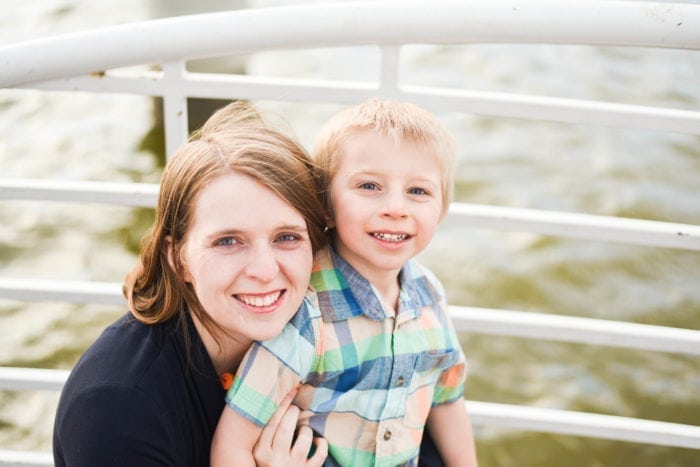 It was only hours after Jack was born that I remember that thought coming to my mind, clear as a bell, as I sat there basking in his wonderful newborn spirit.

After having a very difficult pregnancy – where I often wondered if I even deserved to be a mother – all my fears washed away as I sat there holding him.

And now, five years later, I know more than ever Jack came to our family at the exact time he needed to.

Being a mother isn’t always easy – but it’s the best calling I’ve ever had.

When Jack turned two, I wrote a post about what I learned from motherhood two year’s in – so I thought it was about time for another post like that.

Do I claim to know everything? Of course not.

But I have learned a lot.

My main job is to love

There are many responsibilities that come with being a mother – I need to feed, clothe, and house my children.

I need to teach them right from wrong.

I need to raise them up in a way that will allow them to be on their own someday.

I need to teach them to respect others.

I need to teach them how to enjoy life and be happy, yet to also be contributing members of society.

But I truly believe that my biggest responsibility to them is to love them – especially in a world that’s not always so kind.

Yes, they need to have limits and be disciplined. That is very important. But I do believe that we need to make sure your children know they are loved

You can never say “I love you” too much.

This quote is mainly in regards to women, but it’s often how I try to approach motherhood (though heaven knows I’m not perfect!).

Anyone who has small children know that they LOVE to talk – about everything and anything.

I’ll admit, I sometimes don’t always listen as carefully as I should, especially as I’m being told another story about Paw Patrol or Rescue Bots.

However, as Jack’s gotten older, I’ve noticed that he notices pretty quickly when I’m not paying attention – and so often, I can tell it makes him sad.

There’s a quote I love that says:

Listen earnestly to anything [your children] want to tell you, no matter what. If you don’t listen eagerly to the little stuff when they are little, they won’t tell you the big stuff when they are big., because to them all of it has always been big stuff.” – Catherine W. Wallace

How true is that? As a parent, I don’t think you can ever listen too much. Every story they tell you is something that is important to them – and for you to act like what they say is important can make a big difference in  how they grow up.

Even though the endless knock knock jokes that make no sense might be a little tiring at times, and the questions they ask always have another question attached, it means so much to them to be heard.

Motherhood is hard. There’s no question about it.

However, if there’s one thing I’ve learned so far, it’s that hard does not mean bad.

In fact, I think the hardest things in life are the ones that end up meaning the most.

I remember when I was pregnant with Jack, I would always read these articles about how hard being a mom was, but they were often associated with negative feelings.

But overall? The hard things we’ve gone through haven’t been bad. They’ve helped me to grow and love my children and Forrest all the more.

So don’t run from the hard – embrace it.

There is a story from the biography of Gordon B. Hinckley that I love:

For Marjorie, there were certain kinds of things that didn’t merit intervention, anxiety or, worse, punishment; most definitely they weren’t worth creating conflict between parent and child. ‘I learned that I needed to trust my children,’ she said later, ‘so I tried to never say no if I could possibly say yes. When we were raising a family, it was a matter of getting through every day and having a little fun along the way. As I could see that I wasn’t going to be able to make all of my children’s decisions anyway, I tried not to worry about every little thing. I think that came from my parents, because they had absolute confidence in me and my siblings. As hard as it has been at times, Gordon and I tried to have the same confidence in our children.

I love this quote, and it’s something that often comes to mind as I parent.

Does this mean that you give your kids everything?

No! I certainly believe children need to learn the value of hard work.

But I think that if you can say yes (within reason) then you should.

I think this is especially important when it comes to spending time with your kids.

The dishes can wait. Your Instagram feed will always be there.

I often feel that children aren’t given enough credit.

They pick up so much from their surroundings – and so much earlier than you might think – especially when it comes to emotions.

Always be aware of how you talk around your children – about yourself, about them, and about other people.

They will remember it all — good and bad.

If you want your children to be kind – be kind yourself. How you treat others and yourself will be reflected in how they do.

As a popular quote goes from Barbara Bush:

Want to change the world? It starts in how you raise your children.

Kids eventually sleep through the night and get potty trained

I think this is the one thing I always want to tell new moms who are stressed out – kids eventually do grow up.

And in the midst of those things…it can feel that way!

But they eventually will. Jack was the most terrible sleeper of all time until he was almost two.

Now he falls asleep the second he gets in the car, sleeps all night, and well, he is definitely potty trained (though wiping his own bum took awhile longer).

And now I realize that yes, eventually he’ll be able to brush his teeth by himself, get his own breakfast, and be able to drive places by himself.

But you know what? I’m in no rush.

It does go by too fast.

Discipline is important with children – they need to know limits and how to respect others and themselves.

However, empty threats mean nothing. If you always tell your child that you’ll take away a privilege, but you don’t actually do it…they won’t learn or care the next time you do it.

I’ll admit, this is something I’ve been really working on lately. I’ve been more careful to make sure my the punishments I get “fit the crime”, and that I actually want to follow through.

It’s better than I imagined

I always wanted to be a mother.

But I never know how much I needed to be one.

I became a mother pretty early on – 22 is quite young by most standards. But I can’t imagine having done anything else with my life at this point.

I will never regret being a young parent.

Being a mother is the hardest thing I’ve ever done, but it’s certainly the most rewarding, and I am so grateful every day for the two boys that call me mom.

I’ll end with this quote – which I love. I feel that it encompasses what motherhood means to me:

Making the decision to have a child – it is momentous. It is to decide forever to have your heart go walking around outside your body. – Elizabeth Stone