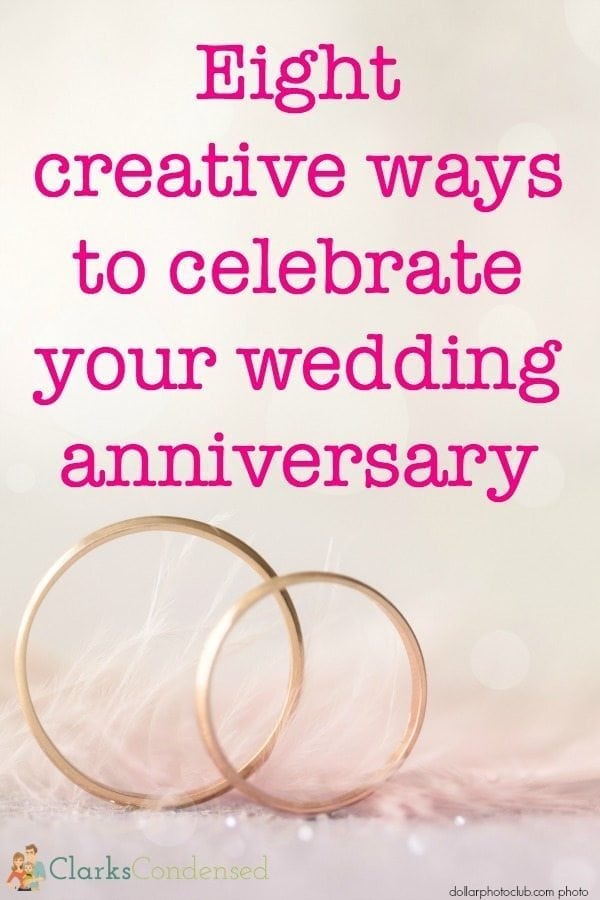 Last December, we celebrated our fourth anniversary! It’s crazy to think we are half way to celebrating our fifth. In some ways, I feel like it was just yesterday, and in other ways, I feel like I can’t even remember life without Forrest. I’ve been so lucky to have him, and I look forward to an eternity of happiness with him. He is my perfect match. 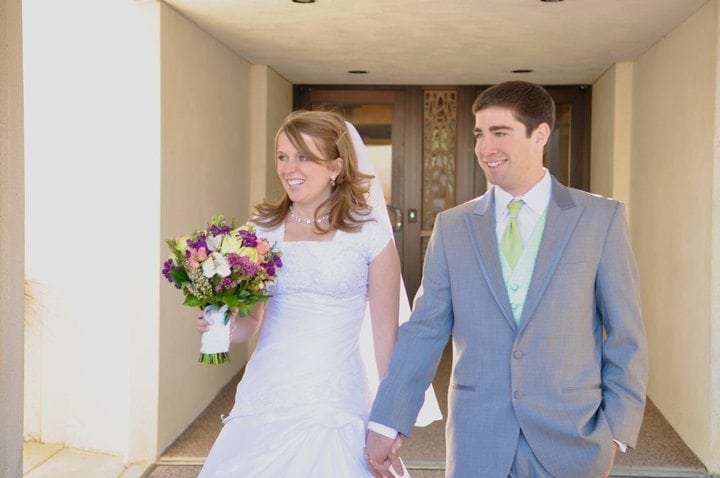 We have a few anniversary traditions that we started at our first anniversary that we’ve kind of kept going. They are both really simple, but I look forward to them each year. Since our anniversary is so close to Christmas, it can be hard to really do too much, but we both like to make sure we remember how lucky we are to be married to each other!

The first one is something I’m sure I must have found on Pinterest. Each year, we have a picture taken of us, holding the picture from the previous year. It’s fun to see how we’ve changed over the past year, and I’m sure that after 50 years, it will be an even more special — for both us, and our posterity! You can also see how our quality of camera has gotten better each year as well.

Year one, I was pregnant! We took a couple of fun pictures that showed that off, but you really can’t tell in this picture. I think it’s the one I have looked the best in! 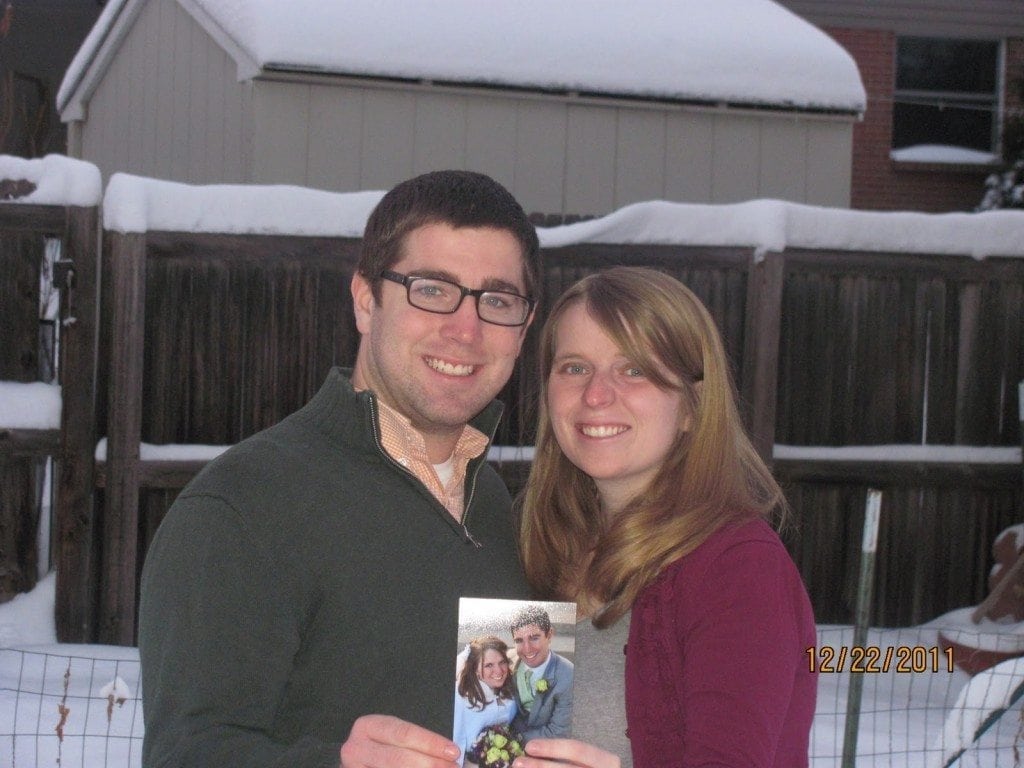 Nothing too notable to say about year two’s picture! Except I don’t like my hair at all. Remind me to never get it cut like that again! 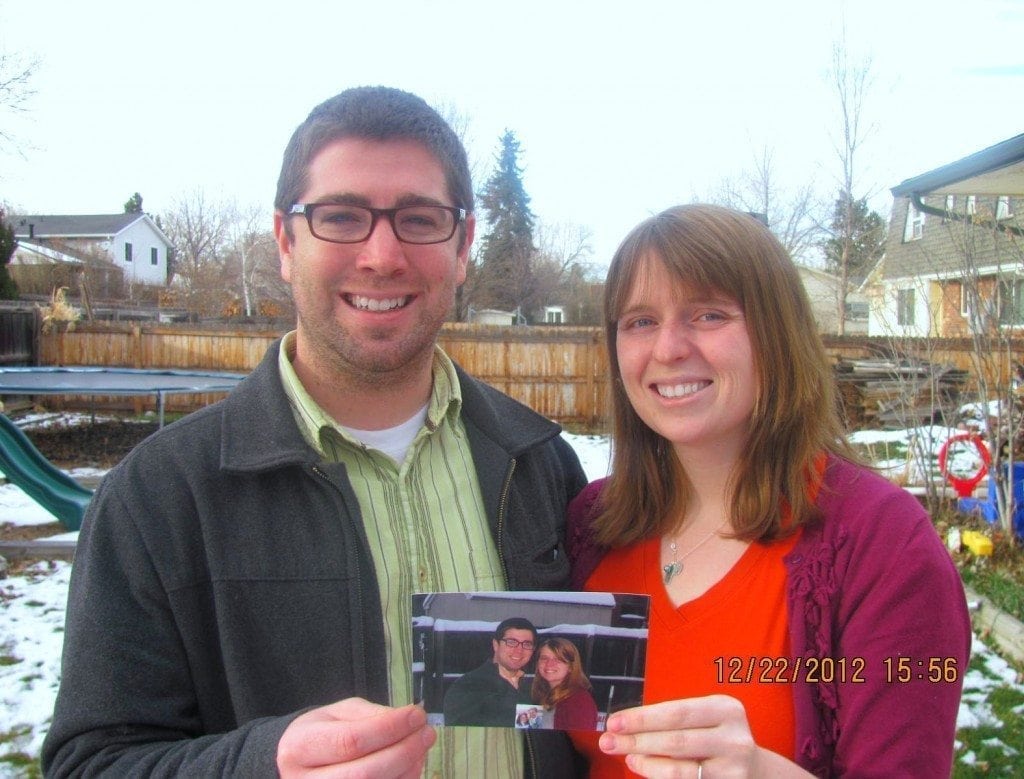 And here we are this year! I think it’s funny, because Forrest’s facial hair gradually gets longer in each of these pictures. Also kind of funny about this picture — I forgot to print off a hard copy of last year’s picture, so we just pulled it up on the iPad. Oh well! 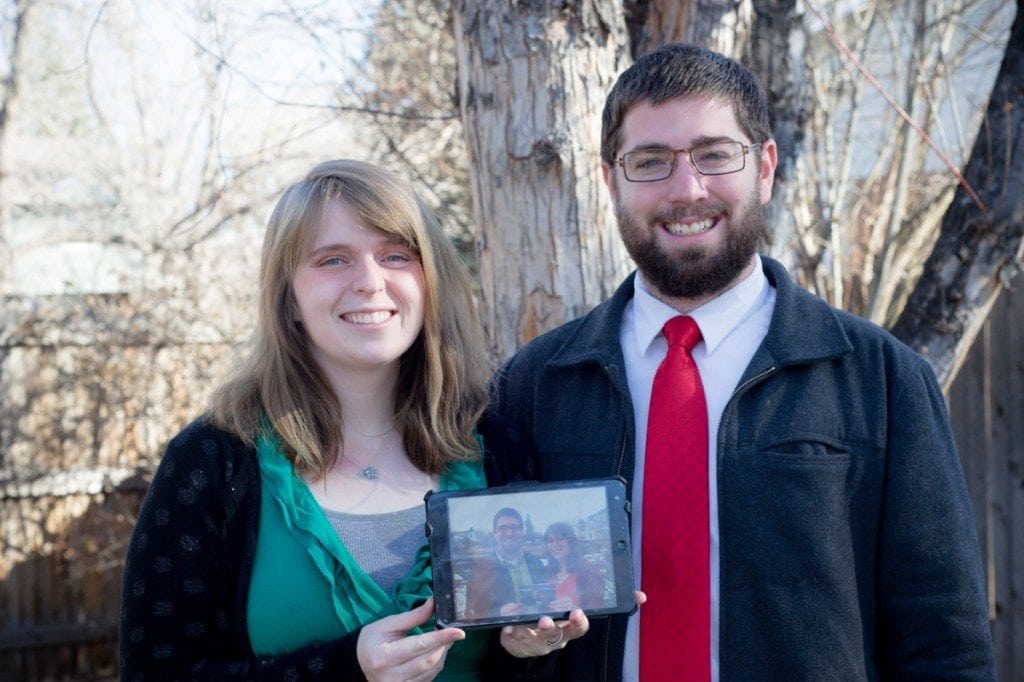 Celebrating your anniversary doesn’t have to be a huge or costly experience. However, I think it’s important to celebrate it and make that day a little extra special with fun anniversary date ideas. Here are eight inexpensive and creative ways to celebrate a wedding anniversary.

Something else Forrest and I have done is each year, we take the anniversary theme for that year, and we each come up with a gift idea that is associated with that theme. It’s been a fun tradition we each look forward to, and it’s fun to make us think outside the box a little bit. Here is a list of anniversary themes by year.

Take yourselves back to where the magic began! This can be a fun way to take a trip down memory lane. On our first date, we went to an El Salvadoran restaurant and bought papusas and fried plantains. We took them back to my apartment and watched a movie (that was sooo boring.) Forrest was sick and coughing the whole time we were in the restaurant (which he was totally mortified about), and I wasn’t even sure if it was a date! Still, it was a fun memory, and it’s something I wouldn’t mind re-enacting for our anniversary – minus Forrest being sick.

Make a simplified version of your wedding cake

Create a Love or Memory Journal

As the years go on, it’s easy to forget some of the smaller details of your relationship. I love the idea of taking your anniversary each year to reflect on the past and write down some of the parts of your last year (or before). Wouldn’t it be so fun to have a nice collection of memory/love journals after many years of marriage?

As you get older and are married for longer, it might be harder to try new things together. While it may be unfeasible to do some things on your bucket list on your anniversary, make it a goal to try something new together. Groupon has some amazing deals on fun activities nearby. It might be fun to allocate a certain amount of money to each person and surprise the other with which activity you want to do together on your anniversary. Another website I found recently is called

Another website I found recently is called Cloud 9 Living. It has “experience” gifts, and they have tons of different ideas in a variety of budgets. You can buy the gift now and book it later, and they have free returns and exchanges…which is awesome, and, in my opinion, better than using Groupon! They have everything from race car driving, to city tours, to learning to fly. Obviously some of the experiences are more expensive than other, but they definitely have options for those with a smaller budget as well. Here are some that are especially popular for anniversaries.

Create a video of your past year

This is similar to the memory journal, but it’s a little more interactive. I absolutely love making memory videos, and I have done quite a few of them for different reasons (parent’s birthday or anniversary, a funeral, our wedding, etc.) Each year on your anniversary, you could gather pictures from the previous year and put them in a video with music playing along with it. I always associate different songs with different years of our marriage (for instance, Danny’s Song I associate with our first year of marriage, when I found out I was pregnant with Jack!) If you have a windows computer, Windows Movie Maker is a great free option for making videos with pictures, songs, and other videos.

This idea will mainly just work if you live in a place where there are a lot of meaningful locations to your relationship. For instance, if we still lived in Provo, this would be a little bit easier for me to put together, as opposed to where we live now (since there aren’t as many memories!)

Basically, you set up a treasure hunt with different clues, directing your spouse to locations that have some sort of meaning in your relationship. At each stop, you could do some kind of activity (if possible). For instance, if I were to do this, I would have one clue lead us to a Papusa restaurant, the LDS Temple in Provo, some of the places we both lived while we were dating, the hospital Jack was born at, etc. I think this would be such a fun way to remember some memorable moments in your relationship. At the end of your treasure hunt, you could have your gift for your spouse (for instance, I think this year of dates binder would be a fun way to end the treasure hunt, so you can make sure you have dates planned out – and more special memories planned – for the next year!)

Jurassic World Giveaway
Next Post: 3 Ways to Show Respect to Your Husband