A variety of ideas for hosting an epic Hunger Games party – including foods based on foods from the books, fun games, and simple decorations!

When I was pregnant with Jack, Forrest and I started reading the Hunger Games triology. Each night he would read a chapter or two out loud. Jack was born right when we were in the middle of the third book, Mockinjay, and it took us about six months to get through it. Regardless, we loved the entire series, and we were thrilled when the first movie came out (and the second, and the third.)

It’s kind of bittersweet to have the final part of Mockingjay to be released, but we can’t wait to see it. It’s kind of like the end of an era. It’s one of those series that I really got invested in, and I’ll be sad that there won’t be any more movies released. However, I was on the edge of my seat during part one of the finale, so I can hardly wait for part two.

Since it’s release is this week (Friday, November 20th), we thought it would be fun to throw a pre-release Mockingjay party last week. It turned out really fun, so I thought I’d share some of our ideas in case you want to have a Hunger Game’s themed party, too! Make sure you buy your tickets in advance, and enter below to win one of five $100 Fandango gift cards so you can go see it!

Since the party was being held during dinner, we wanted to serve more than just snacks. After a lot of deliberation, we decided on lamb stew, drop biscuits, juice, popcorn, and chocolate cookies with white roses. All of these recipes were inspired by something we had read in at least one of the Hunger Game’s books.

I have never had lamb before, but when I saw it on sale at Target, I was so excited to be able to come up with a crock pot lamb stew recipe. I think it turned out fantastic! Get the recipe here. 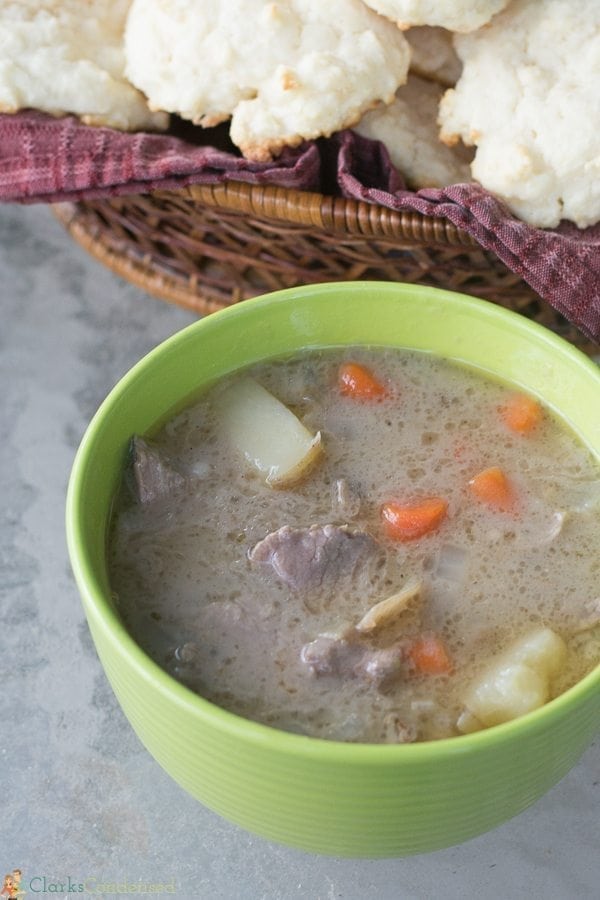 Obviously, President Snow’s signature item is a white rose – so we made some white roses using Wilton’s rose candy mold and bright white candy melts. They took just a few minutes to make, and then we placed them on top of these double dark chocolate cookies (when they were cooled.) They tasted so good, and they were a huge hit. 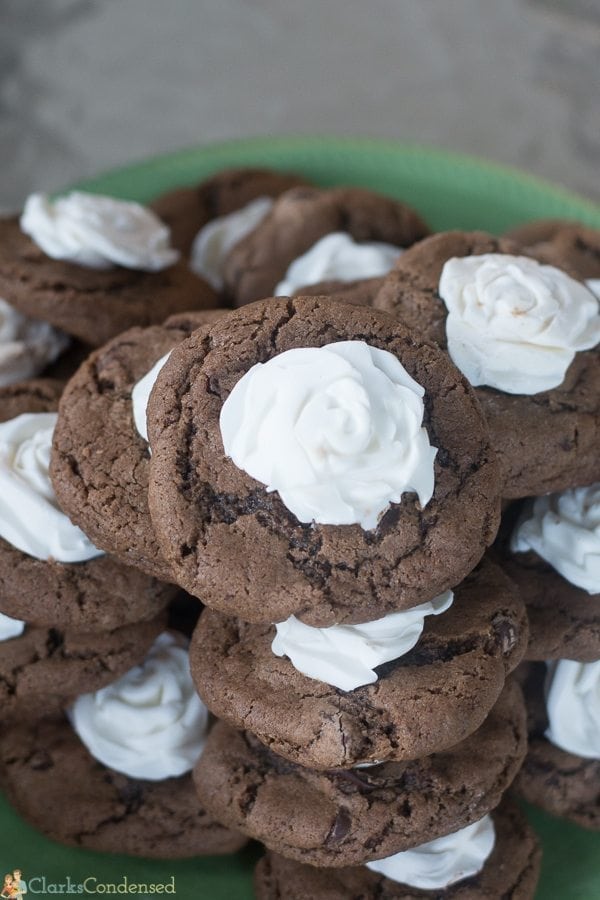 We also made drop biscuits. I don’t actually remember if there are biscuits in the Hunger Games, but these are in honor of Peeta…the boy with the bread. We used this baking powder biscuit recipe, using the variation instructions for drop biscuits. 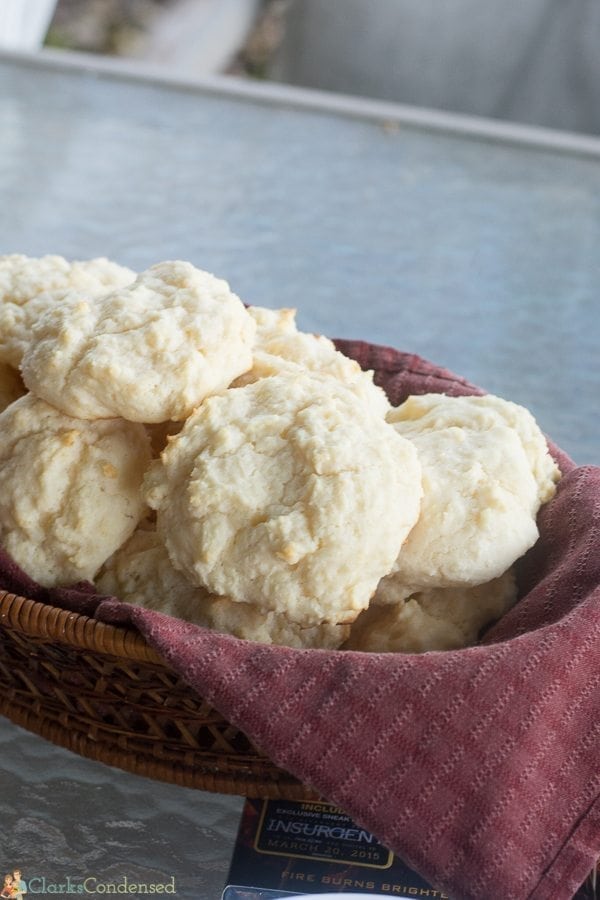 There is a part in the book where popcorn is made over the fire. Since we were going to watch the movie, we thought we should serve popcorn anyway. Forrest decorated some black cups from the dollar store with the Mockingjay symbol  using gold paint pens. 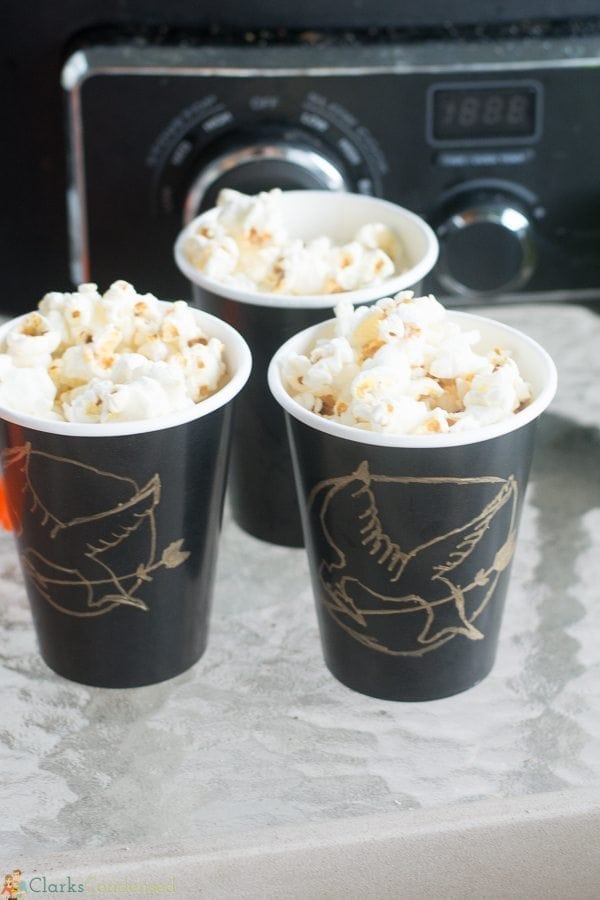 What party would be complete with games?! Here are a few Hunger Game’s themed party games that we thought would be really fun.

First off, everyone had to draw teams! I made these tickets with “District 13” and “The Capitol” on them. This divided people into teams for some of the games. You can download the printable below (just scroll over the image for the download option.) 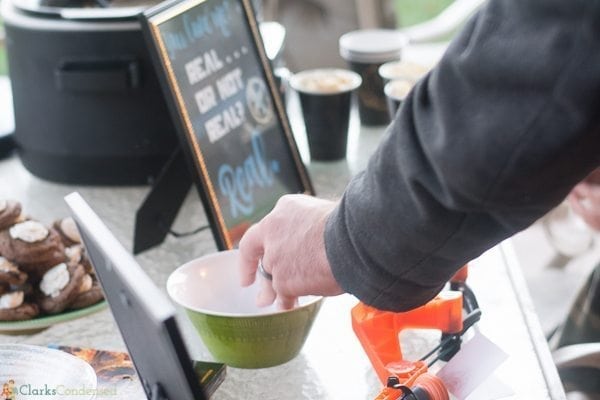 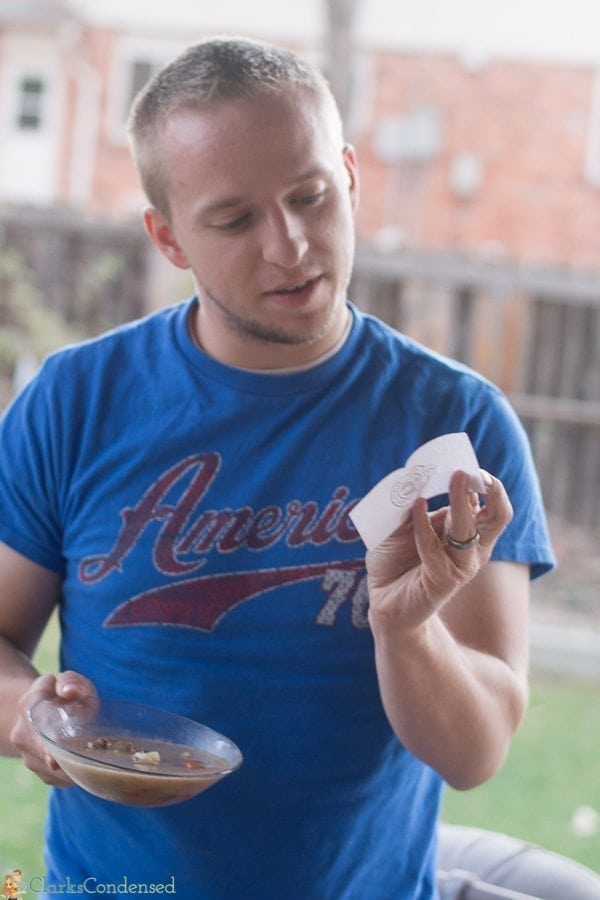 We came up with three games!

Real or Not Real

Have you ever played two truths and a lie? That’s basically what this game is. Everyone gets a note card where they right down one two real things and one lie about themselves. Then, you read them out loud and everyone guesses what was real and what was not. It’s kind of fun!

Glow in the Dark Capture the Flag

This is just a fun little competition. You need to buy glow sticks (the dollar store always has them.) We just had everyone put them in their pockets. Just play the way you’d play normal capture the flag – just in the dark!

We bought a bow and arrow from Target for about $18. Everyone loved trying to see who could shoot their arrow the furthest. Forrest and I thought it would be a good idea to set up some bottles or something to shoot over as well. 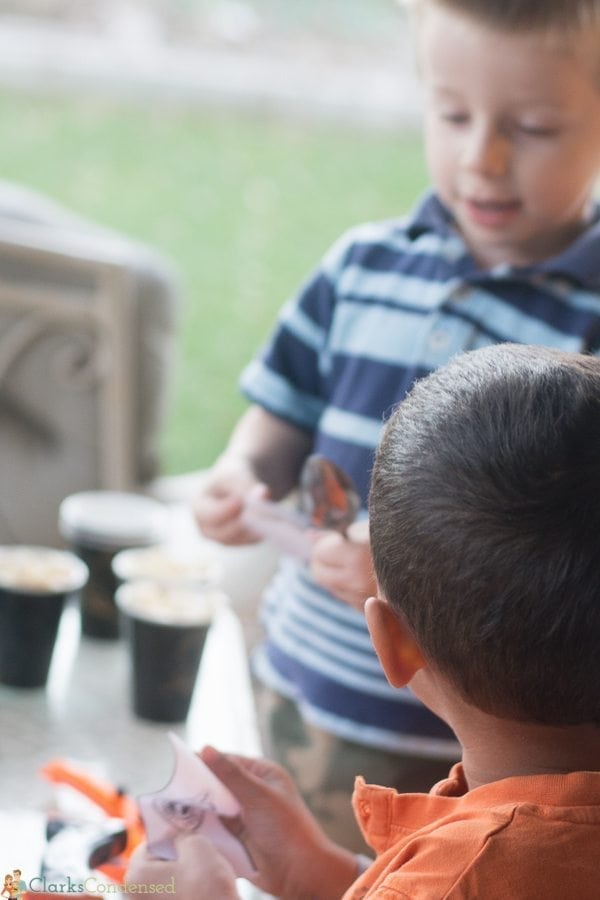 We kept it pretty simple for the decor – just a couple of fun printables in dollar store frames. Here are two that I made using quotes from Mockingjay. You can print them using links below the image! 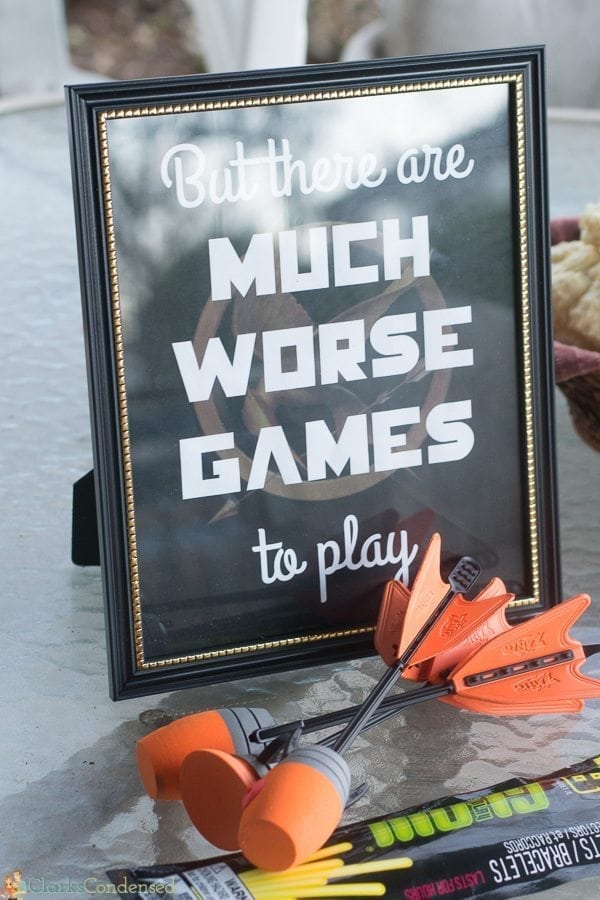 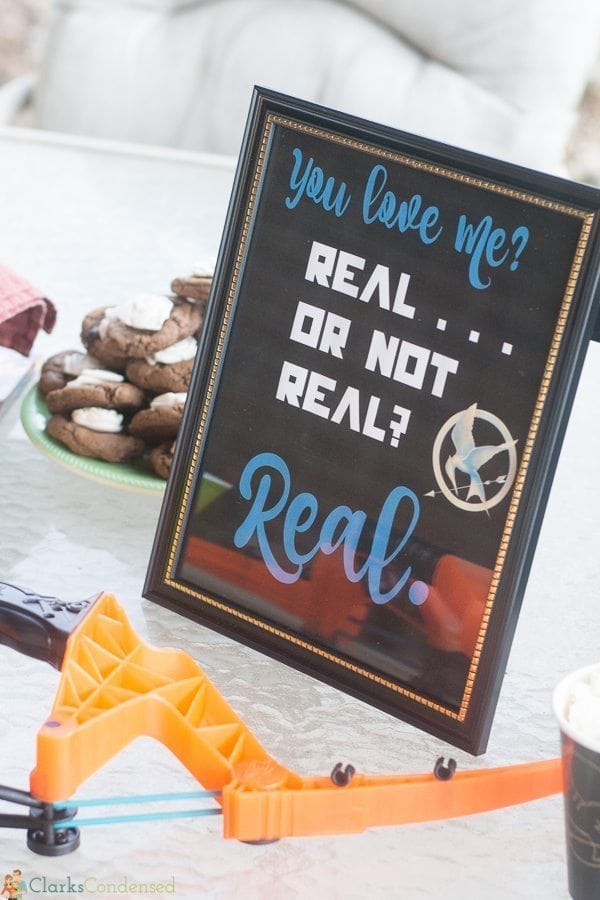 We also put up a movie poster from Mockingjay, just for fun! 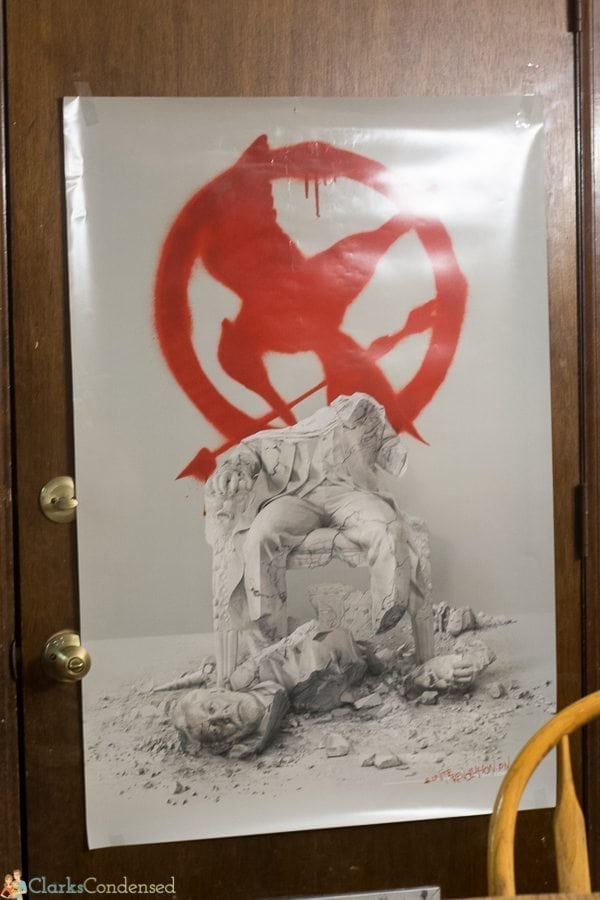 And now, enter to win one of the gift cards!
Mockingjay Part 2 Giveaway