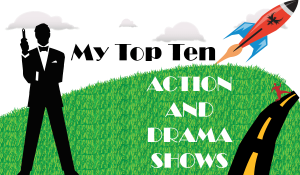 I had trouble trying to differentiate between shows with a little action and a lot of action. 24 has a lot different type of action than Early Edition. Additionally, I’m not a huge fan of shows that have traditional drama with not action. So, if was going to include any shows with almost no action into any of my lists then I would have to put it into this one.

1. Jericho – This show only lasted one and a half seasons, but, to me, it was epic and intense. I as so captivated by the show that I watched some episodes thirty seconds at a time at my parents house when they had terrible internet speed. The show starts out with a nuclear explosion, and it goes through what might happen in an average small town if suddenly thrust into a situation like that. I like to imagine what if scenarios. I like to figure out how prepared I am for certain situations. For example, what if there was a nuclear explosion. What do you do? What are some of the practical issues to be considered while dealing with the fallout. How might society react, and how might that affect me. The show goes one such possible scenario. Additionally, I love how the fans pushed really hard for a second season, and they were at least rewarded with a half season extra.

2. The Pretender – It has been awhile since I watched this show. However, when I remember watching this show as a kid I remember how intense it felt. It is something my whole family watched. It was always interesting to see how the main character could pretend to be so many different things.

3. Robin Hood – This is an English show with several seasons. Action packed and very dramatic. I always enjoy a show where the core group of good guys have a strong and loyal camaraderie. It can be a bit cliche, but it is good to reminded of what friendship and loyalty can look like.

4. Merlin – This is another British show with an interesting twist on the classic story. Merlin is a young servant of King Arthur, but magic is outlawed. Merlin has to help King Arthur fulfill his destiny without revealing his use of magic.

5. Arrow – This is a new show that just started another season. It shows a gritty, somewhat conflicted man who through extraordinary circumstances is transformed into a superhero. I always like seeing the human aspects of superheros. Superheros that don’t rely on mystical, magical, or practically magical science experiment accidents make you wonder about the limits of human ability. What could a person achieve if he was determined and empowered enough? Plus, the plot and action is intense.

6. Smallville – 10 seasons really flushed tons of interesting story lines out of the Superman story line. Smallville is the story of young Clark Kent who has to learn about his powers, his destiny, and his relationships. The show does  a good of balancing dramatic action with dramatic moral challenges. Even though he had amazing physical abilities he still had to learn how make good friends and good decisions.

7. 24 – I actually haven’t watched a ton of 24. However, from the little I’ve watched and the rave recommendations that Katie always gives me that I should watch more I had to put on my list. Plus, there are all of those great jokes that put the Jack Bauer level with Chuck Norris. The episodes I did watch were always very intense, and including a few moments where I was I had to say something like, “I can’t believe he just did that!”

8. Early Edition – Early Edition show that I watched when I was younger with the rest of my family. I watched an episode again the other day and it still was very entertaining to me. The show’s premise is that of a guy who gets tomorrow’s newspaper today. With the knowledge he gets he can change what will happen and what the newspaper looks like.

9. Hart of Dixie – Honestly, I think I like this show because that the strong southern flavor it has. It is based in the south, and Dixie is in the name. Other than that, it isn’t what I usually watch so I might label it a guilty pleasure. The small town feel amplifies the story lines. A lot of the issues that affect one person affect someone else, and everyone learns about it quickly.

10. Royal Pains – To me, summer isn’t usually the best season for television shows. However, for the last couple of summers I have enjoyed watching Royal Pains. It is about a medical doctor that moves to the wealth Hampton’s area to be a concierge doctor. He lives their with his brother, and they make many new friends along the way. The doctor has a Macgyver style where he improvises medical devices on site to help out his patients. Somewhat in the spirit of House he seems to have a talent of diagnosing unusually illnesses. Life and death is always entertaining.

I probably forget a few shows. You probably have a very different list. What are your favorite action/drama shows?

The Ultimate Guide for Planning a Disney Vacation
Next Post: Halloween Bug Project