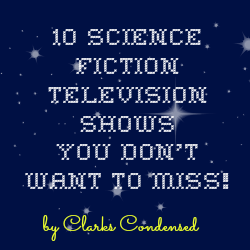 Here are my favorite top Science Fiction shows. I have to admit that I like shows based in space a little more, and I am unable to enjoy or recommend shows with characters that are too sexual and show too much skin. Battlestar Galactica falls within this category, as does Defiance. Additionally, I don’t view fantasy shows such as Merlin as science fiction. I haven’t taken the time to delve into all of the classic science ficiton shows. I have trouble staying sufficiently interested and engaged in shows such as the older Battlestar Galactica and the Twilight Zone. I think another issue I had with Battlestar Gallactica was all of the deception and politics. There wasn’t a clear core or team of people that knew that they could trust each other 100%.

About science fiction in general, I love the enabling devices, the fictional scientific devices or knowledge, that allow stories to be approached in a unique way. Instead of talking about racism, you can show prejudices between aliens and humans. Also, I like the dreaming that can be done about what humanity might be able to achieve in the future, yet it can be interesting to see how much humanity might remain the same in very different circumstances.

By the way, it has been awhile since I have seen some of these shows so my opinion of them might be from

I like the outlaw, western style of this show. This show was shown out of order at a poor time which lead to only one season and luckily a movie, Serenity, being made. I love the style of the show, and the overall plot is interesting too.

I like the feeling of exploration and discovery in this show. The show starts with the characters figuring out how to travel from one planet to another, and then they end up challenging local galaxy powers. One convenient thing about this show is that the gate that allows them to travel through space makes computer generated ships less necessary, and thus the show can invest in other areas.

Like Stargate SG-1, sliding from parallel universe to parallel universe eliminates the need for spaceships and long trips. Sliders, almost more than any other show I’ve watched, creates many different story lines. Each episode can be very different, and I wouldn’t be surprised if some subsequent shows stole some ideas from Sliders.

An astronaut gets lost in space and must join a strange alien crew far away from Earth. He has no hope of returning to Earth, and he is forced to accept he will live out the rest of his life among aliens and strangers. One of the stranger science fiction shows, especially if you don’t like creature effects. This is an Australian show that I think went 4 seasons with an accompanying movie.  (note from Katie: Forrest started watching this a few months after we got married…and I thought it was the weirdest show ever! I was so glad when he finished all the episodes!)

This Star Trek is a prequel to the original Star Trek. Like Stargate, Enterprise shows an initial foray by mankind into the galaxy. There is a great spirit of exploration. I like the uncertainty. It seems like a coming of age of humanity.

This show does have a strange kind of ghetto, post-apocalyptic style with strange fake slang. However, overall I enjoyed the action and plot development. James Cameron was the producer for this show.

This show was inspired by Gene Roddenberry. Some of the episodes are weird, but some of them are really good. The main character did play Hercules in the television show, so if you liked that you might like this. I watched most of the episodes recently, and I wasn’t disappointed.

Spin-off of Stargate SG-1, Stargate Atlantis follows a group of people who willing go on a one way trip to an ancient city far across the galaxy. They struggle to make it on their own far away from any support. Like most good science fiction, dealing with problems on your own away from civilization is a them drawn from westerns.

A newer show, which I only classify as science fiction because it isn’t your average post-apocalyptic show. The power goes out across the world and stays out due to an active scientific force. Other than that, there are a lot of parallels to medieval shows because of the use of swords and horses. I think it is an interesting concept to thing of what might happen to society if the power went out.

This shows follows a group of people who end up on an ancient ship of an advanced race that is zooming across the galaxy. They have to learn how to understand the ship and survive as a community on the ship. Provides a microscope onto issues that face us in communities about leadership and community values during a crisis.

A few shows that I have seen high on other peoples lists are X-files and Star Trek: The Next Generation. X-files has very little actual science fiction, and lot of conspiracy theories and paranoia. X-files is still entertaining. Star Trek: The Next Generation doesn’t have enough action for me. In order to save money the show focuses on character development and a lot of intellectual dilemmas. It is just a tad slow moving and boring for it to be a favorite of mine. Mystery Science Theater is mostly great just because of the mockery of weird old films, and not because of its science fiction setting.

Honorable Mentions: (I’m sure there are tons more)

Do you have a favorite science fiction show? If so, why?