Today has been a long day. It started with me almost being smashed in the head with an iPad by Jack, who was attempting to wake me up, and luckily Forrest opened his eyes at the  right moment. My meals for the day have consisted of Almond Joy bites, and fruit snacks (I promise I eat a lot healthier than that most days), and when we were at the store, this happened:

Yep…Jack won’t be allowed to hold the carton of eggs at the store anymore.

Needless to say, we needed to get out of the house. So Forrest, Jack, and my little brother, Michael, and I loaded up in the car and headed to a local disc golf course. 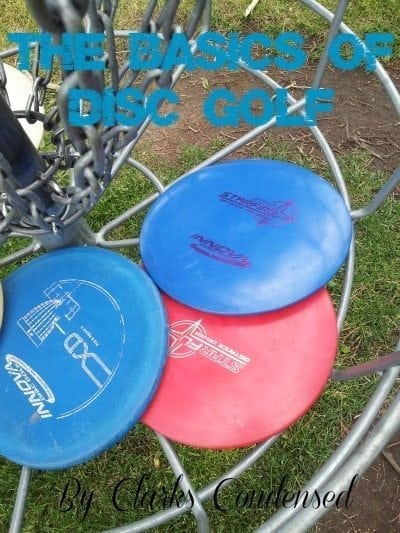 Never heard of disc golf? A lot of people refer to it as Frisbee golf,  or Frolf, but as Forrest will correct anyone who says otherwise, it’s disc golf. When we first met, I pretended like I was really into playing sports (even though I am most least athletic person ever) and one of the sports Forrest wanted me to try out was disc golf. And, in the end, it was one of the only sports he taught me to play that I’ve actually enjoyed. We’ve played it quite a bit throughout our marriage and enjoy finding new courses to play at.

So, like I said, today we went to a local course, located right next to Arapahoe Community College in Littleton, Colorado. It was kind of difficult to figure out the course at first… 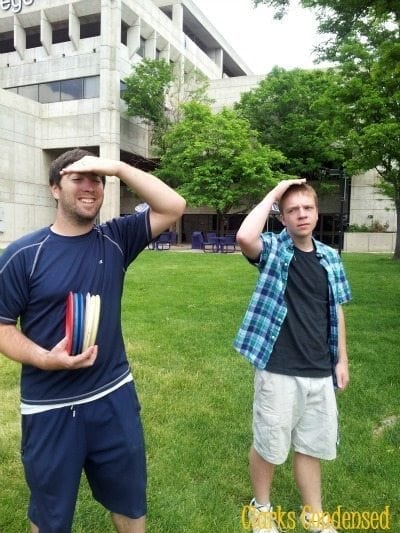 But we ended up having a lot of fun.

Forrest is a good sport, because Michael and I were so not good. But Jack enjoyed carrying around the discs, and putting them in the baskets. 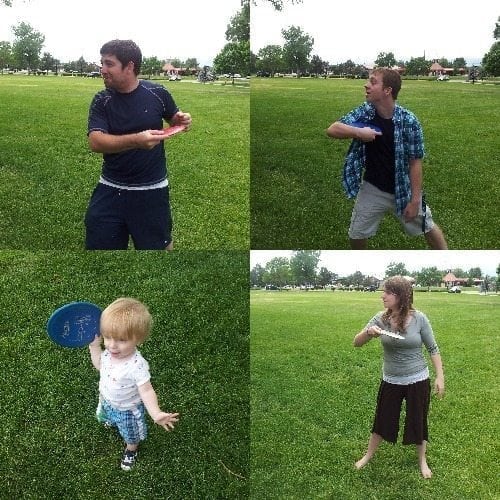 Disc golf is a great game to play with other people, and it really doesn’t require a lot of equipment. Some people even play with just a regular old Frisbee from the store. So if you are looking for a new fun activity, that people of all ages can enjoy, you’ll definitely want to look into this!

Now, since I really don’t know a lot about the sport, here’s Forrest to give you a little more background on the basics of disc golf:

Growing up my dad regularly played disc golf. It is a game where rubber/plastic discs are thrown from a tee into a basket. You may have heard of it as Frisbee golf, but Frisbee is a brand so it isn’t technically correct to call it that. There are many similarities to golf in the structure and rules of the games, though it takes a lot less time than regular golf (and I think it’s way more fun.) It’s a great sport for anyone who just wants to get out and have a little fun, and even a little exercise. Here are the basic rules for recreational play, but really, if you just want to play without all the regulations or keeping score, go for it.

It’s not always easy to find a course, but most areas actually have one. This website can help you find courses near you, and it also provides reviews. It should be noted that not all courses are maintained very well, and sometimes it can be hit or miss. Courses can also be very different from one another. Where I am from, the course has lots of tree, but where we played today was a wide open field with a few trees scattered around it.  You might be surprised about how many courses are around you, because they are sometimes just hidden within a regular park.

There are probably a lot of different techniques for throwing, but here’s a short video with some of the basic throws and holds. And, if you really aren’t interested in that part, if you watch until the end, you’ll be able to see how amazing Katie and Michael are at throwing.

A beginner’s set is around $20 on Amazon

and they generally include a putter, a mid-range/multi-purpose disc, and a distance driver. You can also find people selling them on Craigslist, or at stores like Sports Authority. It might be a nice late Father’s Day gift.

My dad has won a number of local tournaments, and he contemplated taking a break from work so he could have some fun trying to go pro.  I have played with him occasionally growing up, so I been able to learn the basics of the game. It is a fun sport to play as a family, and it can be a good exercise if you throw and run like my dad often does. Let us know if you have any questions, or if you have ever played before.

The Host by Stephanie Meyer — Book Review
Next Post: Where Would We Be Without Good Fathers?