Since Katie and I have signed up for Netflix and Hulu, it has become rather convenient to watch a lot of different television shows. I thought it would be fun to share a list of some of my favorites.

My first list (more might be coming the future) are detective/investigative/police shows. Some of these shows could fit in other categories as well, but overall they follow a similar plot pattern. Often these shows have exciting plots revolving around specific cases or villains while the main character development is slow. 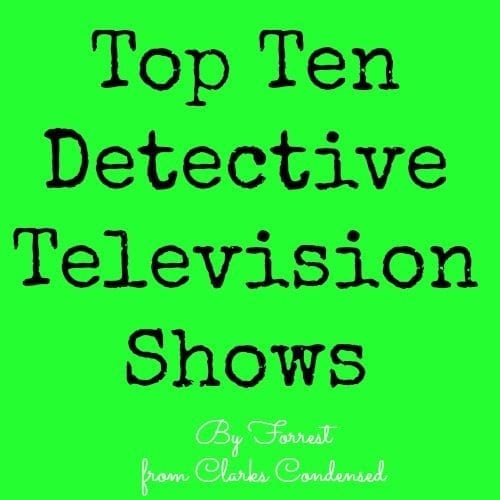 With most of these shows, there are some moments that I wouldn’t recommend or approve of watching. There is some language, risque scenes, or violence. Use your own judgment and skip ahead if you need to. Otherwise, they’re generally entertaining and engaging. In almost all of these shows, there is some kind of romantic story line that is focused on to different degrees.

My criteria was mainly whether or not I was excited to see the next episode of the show. There are a lot of other shows I like that either aren’t as engaging as these or they don’t fit the mold of a detective show very well. Those I listed at the bottom.

Psych has some brilliant comedy that can be found nowhere else. There are lots of seasons, so if you have never watched it and you find you like it, there are lots of episodes to enjoy. The basic premise is that of Shawn, the son of a detective, was trained since he was a kid to solve crimes. However, after one tip that was too good to believe didn’t come from being a part of the crime itself, Shawn claims he is a psychic. He is told that if they find out he isn’t psychic that he will be thrown in jail. Because of his incredible success in solving crimes, he starts to work for the police on a case-by-case basis. It often seems that Shawn enjoyed his psychic charade a little too much, but it does provide a constant source of comedy. I’ve watched Psych on Netflix and Hulu.

As the name suggests, this show has lots of bones. The main character, nicknamed Bones, is a forensic paleontologist. If I am remembering correctly, it is partly based on a true story. She helps the FBI solve crimes through analyzing the bones of murder victims. There aren’t always just bones. I feel like the ‘gore’ didn’t bother me because it was usually treated with a scientific perspective by the characters. Not everything happens in the lab. There are a number of action packed episodes, along with some conniving and despicable villains. There is a healthy variety of main characters that have consistent plot lines that want to follow episode to episode. There are lots of seasons to enjoy. I’ve watched this on Netflix and Hulu.

Grimm follows a detective, Nick, who learns that he comes from a long line of grimms. As a grimm, he fights people who can change into supernatural beings. Nick has the ability to occasionally see through their human form. However, as a grimm and a detective, he breaks with family tradition and learns how to judge these unusual people fairly. Nick struggles with keeping his secrets, balancing his new abilities with his responsibility as a detective, and understanding the dynamics of the community of strange people.There have been three seasons.

The supernatural versions of the people can be kind of freaky, and this may make you think that the show is overly dark. However, the show focuses on how Nick breaks with the past prejudices of his ancestors, fights crime, investigates his family history, and protects the innocent. I’ve watched this on Hulu.

The Glades follows a detective who leaves Chicago after annoying his boss so much that he shoots him. With the settlement money he moves to Florida where he plans to play golf and take it easy as a detective for the sunshine state. However, as he soon finds out there are lots of murders that need solving in Florida and that he has lots to learn. Despite his blunt and confident attitude he learns to make some friends and build a new life for himself. I started watching this on Netflix, and the new episodes I have watched are on Hulu.

The show starts out with Charlie Crews just starting back to work as a detective after spending 12 years in prison for wrongfully being convicted of murdering his friend and his family. Supposedly he has adopted a new zen attitude that allows him to return to work with some of the same people that may have set him up. His obsession with zen self-help material and fresh fruit (something that he couldn’t have in prison) provide some interesting semi-comedic motifs. Charlie uses some of what he learned in prison on the job, and he uses some of his detective skills of the job to figure out who killed his friends and framed him. For some reason watching Charlie eat fresh fruit all the time made me start eating more fruit. I watched this on Netflix recently.

NCIS is a long running show about a Naval Criminal Investigatory Service (or something like that) unit. Jethro is the quiet and wise leader who keeps his young agents in line with near paternal loyalty. The unit investigates deaths of members of the Navy and (I think) Marines in non-combat situations within their area of jurisdiction. They spend most of their time within the DC area, so the plot lines can easily involve DC politics, international state sponsored threats, or traditional domestic crime.

NCIS has always had a bit of an old school feel to it. I think it is targeted towards an older audience. I think this partly has to do with Jethro, who seems like he might have come out of a western. Plus, sometimes I think the cinematography is either a bit foggy and/or there are a lot of close ups. Either way, it has a much different feel to NCIS: Los Angeles. However, it is fun to see the two casts mix a bit every now and then. Each character in the show is very unique and interesting to follow. This is one of the first shows I caught up on after my mission. My parents had fortunately DVR’ed a bunch of episodes.


NCIS: Los Angeles is the West Coast spin-off of NCIS. This NCIS office, however, specializes in undercover work which brings a whole new style to the way the officers solve their crimes. There are some excellent iconic relationships between the officers. I might like the show a little extra because it takes place in Southern California where I served my two year LDS mission. There are a few regular villains to follow, and the story lines of the officers are very interesting. The episodes always seems easy to watch. I usually watch the episodes on CBS.com

White Collar is mainly about a white collar criminal, Neal Caffrey, who is arrested and agrees to work for the man who arrested him, FBI agent Peter Burke, in order to stay out of jail. However, Neal has a tough time reforming as old habits die hard. Yet, Neal proves to be a great asset in catching other white collar criminals. It seems there isn’t a better duo than Neal and Peter. The clever deceptions and con man style of Neal, plus the strained relationship between Neal and Peter are what make this show so interesting. I watched a lot of these episodes on Hulu, but there are three seasons on Netflix right now.

John Doe is about a guy who is fished out of the ocean who has amnesia about who he is, but he seems to know everything else. His missing identity leads him to be called John Doe. His brilliance causes the local police force to use him to solve cases while the try to help him figure out who he is. John Doe is a little older than most of the other shows here since it ran only one season from 2002-2003. I don’t think the show is on Netflix right now, but it is on Hulu+.

Day Break is about a detective who realizes he has been framed for murdering a District Attorney he says he doesn’t know. Then he wakes up and the day starts all over again. There are some shadowy forces that must be uncovered while everyday he ends up on the run. For those of you who like police shows and the movie Groundhogs Day this is the perfect show for you. There was only one season unfortunately. However, with the way the plot was set up it might have been weird if there were more than one. This show isn’t on Netflix, but it is on Hulu+. By the way, I couldn’t remember what this show was called, and for some reason it was super hard for me to find.

Do you have a favorite detective show? If so, what is it and why? As you can see, I watched most of these online, as we don’t have cable. Be sure to check out this list of cable and satellite alternatives that I created awhile ago.

Honorable Mentions (in no particular order):

How to Write a Good Resume
Next Post: Easy Garlic Knots