I participated in a campaign on behalf of Millennial Central Consulting for Mrs. T’s Pierogies. I received a product sample to facilitate my review and a promotional item as a thank you for participating.
Back in April when Forrest and I graduated from BYU, we decided to have a graduation party with our family and a few friends. On the day of the party, I had to run to Costco to get a few things. My dad and little brother went with me.

As any good Costco trip goes, we got a lot of delicious samples. However, the ones that stood out to me the most were pierogies. I had never eaten these before. The only time I had even heard of them was when an old roommate of mine brought a box home one day. However, after one bite, I couldn’t stop thinking about them — they were so addicting — the sampler said to take as many as we wanted, so we did.

Apparently, that was the only day that pieorgies were sold at Costco…and I was so sad! So, when I discovered that some of our local groceries stores carry a great brand called Mrs. T’s, I was absolutely thrilled!

Mrs. T’s Pieorgies are the perfect freezer food — they are easy to cook up, and you can dress them up in all sorts of fancy ways. It’s great for those times that you forget that company is coming over (er…I hope I’m not the only one that happens too!) You can easily pop them in the oven, saute them on the stove, and dress them up with your favorite sauce! Pierogies combine two of my favorite comfort foods — potatoes and pasta — and combine it into the ultimate comfort food!

So with it being that crazy time of year where I feel like we are always hosting guests, I picked up a few boxes of Mrs. T’s at the grocery store. They only had two flavors at my local Walmart (though there are 11 different kinds from the brand, including whole grain) so I chose the potato & 4 cheese blend. I also saw a jar of Classico Creamy Spinach and Parmesan on the same day, and I thought it would pair perfectly with the pieorgies! 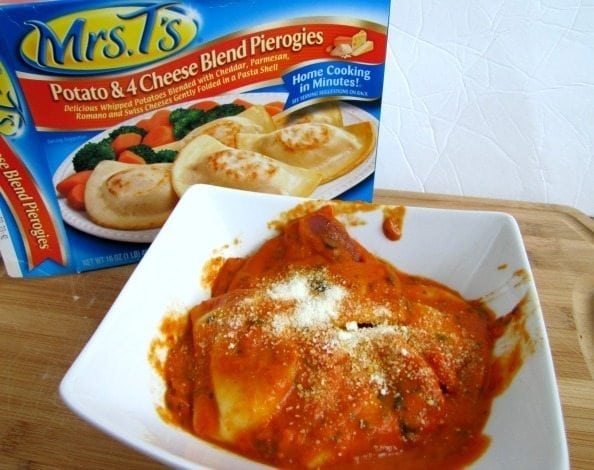 I made this pieorgies by sauteeing them in a frying pan with chopped up red peppers and onion, and then mixing in the Classico sauce. I topped it off with my favorite cheese of choice — parmesan. Everyone loved them, and were amazed that such an elegant dish took such a short amount of time. Plus, it made me look like a way awesome cook!

I think the thing I love about pierogies is that they can be used as finger foods for a rowdy football game, or served as the main dish for an elegant, sit down dinner with friends. I mean, there’s not a lot of foods with so much diversity.  Ever since we first tried them, I always try to have a box in the freezer. I can’t wait to share these over the holidays, since we are sure to have lots of fun parties coming up!