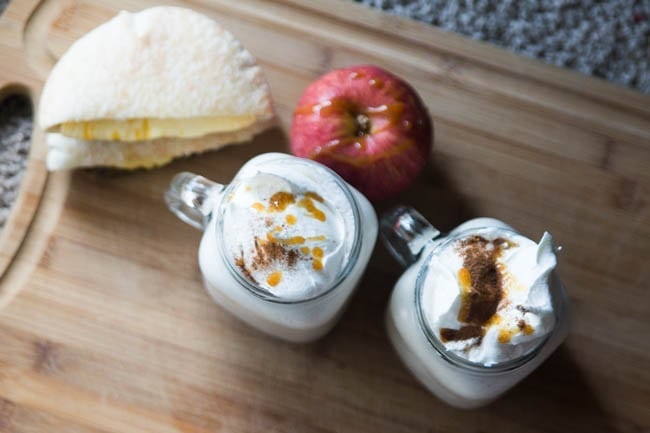 Even though it’s still August, I’ve been allowing myself to dip my toes into the fall every now and then. So the other day, when I was really craving something caramel apple-y, I thought it would be fun to make a caramel apple smoothie. 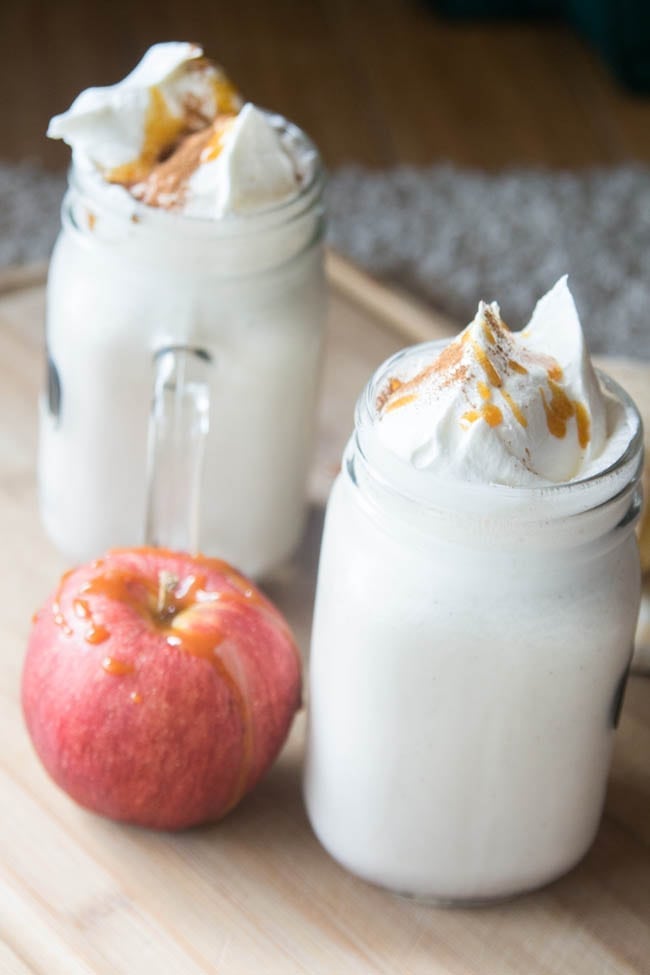 Even though I don’t always have the time or energy to put into making breakfast, I do try my hardest to switch things up every now and then. I thought that this smoothie, paired with a tasty egg white and turkey sausage flatbread pocket sandwich from Sandwich Bros., would be a fun and hearty breakfast for all of us. The Sandwich Bros. flatbread is only 150 calories, so combined with this lighter smoothie, it was a breakfast none of us would feel guilty about. 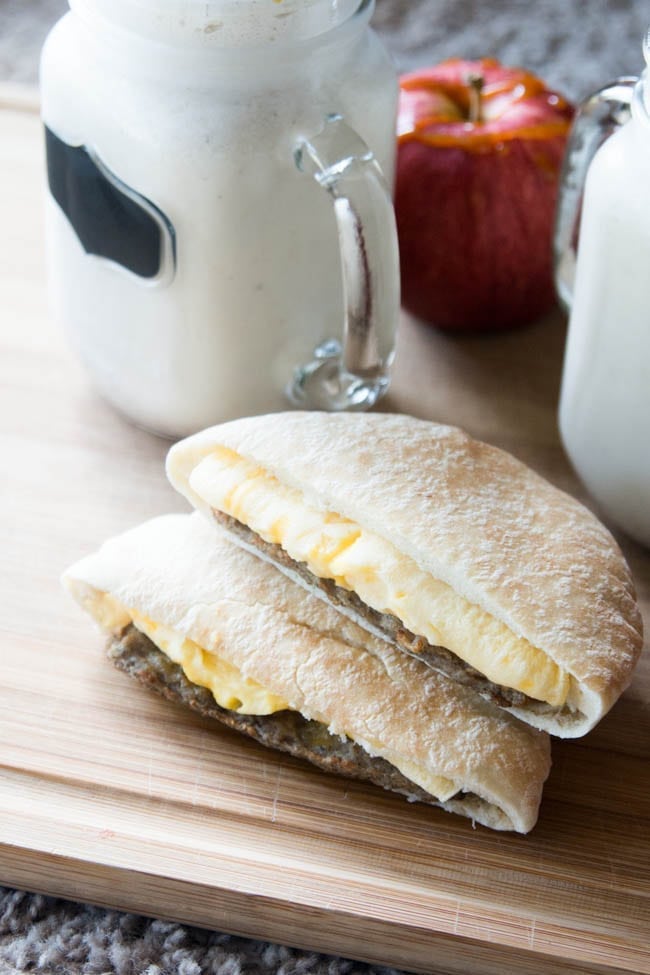 We had gone to Costco recently, and there was a guy there selling blenders. Although we had no desire to drop 400+ dollars on a new blender, we all loved the smoothie he gave us…so we decided we needed to make them more often.

This caramel apple smoothie is super easy. It’s not overly sweet, but it has the fantastic flavors of fall incorporated into it. It took me awhile to find salted caramel yogurt, but I found some at King Soopers (Kroger affiliate) made by Noosa, and it was perfect. 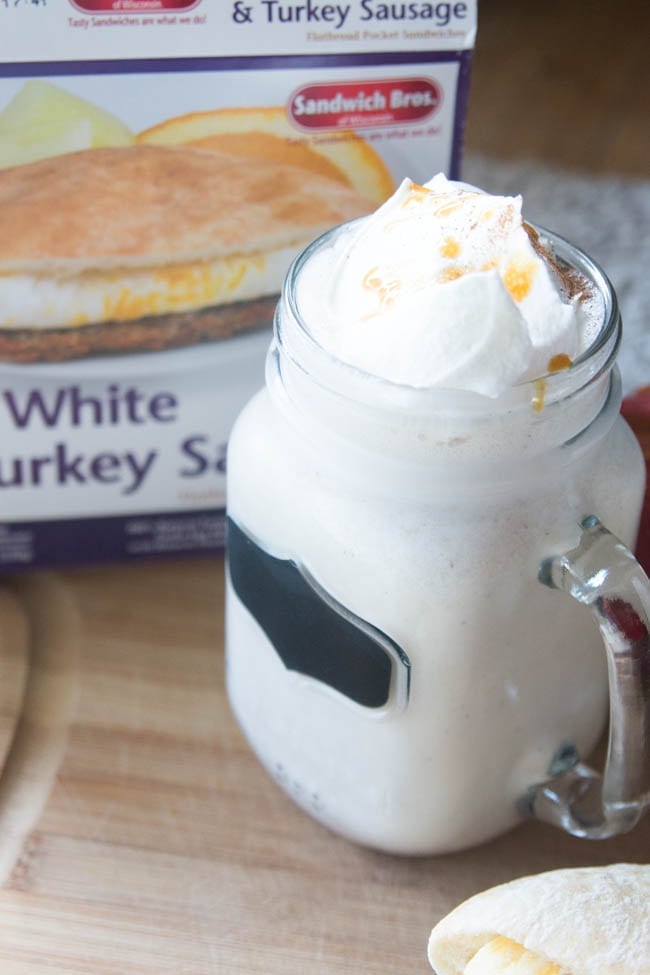 Of course, whipped cream doesn’t necessarily scream breakfast…but you don’t have to put it on top. I thought it was a fun finishing touch, though. 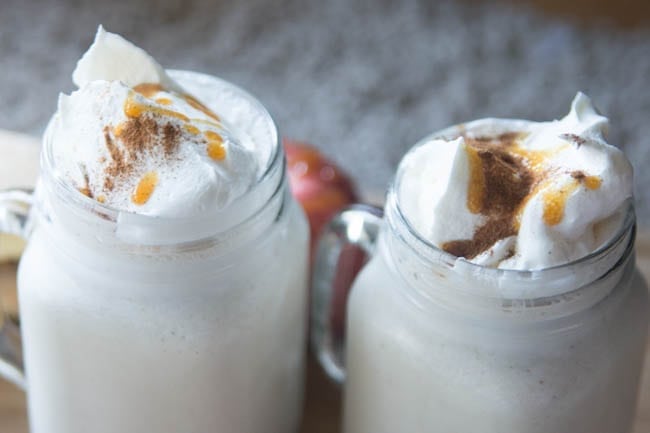 I definitely love fast breakfasts, and this definitely fits that bill. Jack and Forrest always like breakfasts that are a little heartier, so they were thrilled when I gave them this smoothie and the Sandwich Bros. flatbread. It felt like a really fancy breakfast, but it hardly took any time at all. Win, Win!

I think it’s safe to say this whole meal was really…really tasty! You can buy Sandwich Bros. flatbread sandwiches are King Soopers, Walmart, and Costco! 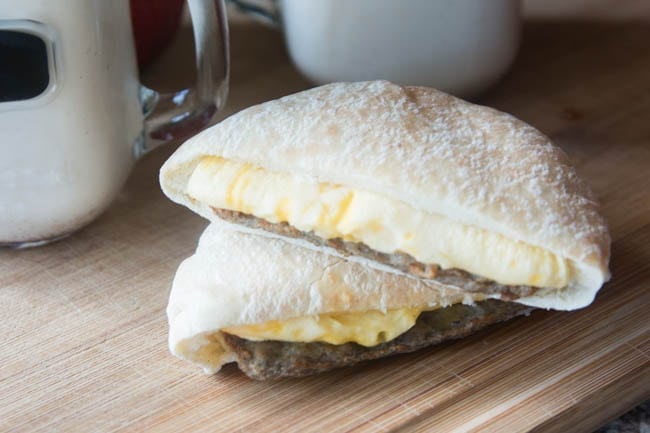 This is a sponsored conversation written by me on behalf of Sandwich Bros. The opinions and text are all mine.

Surviving Pregnancy for Dads: From a Father of Two
Next Post: Road Trip Survival Kit: For Adults